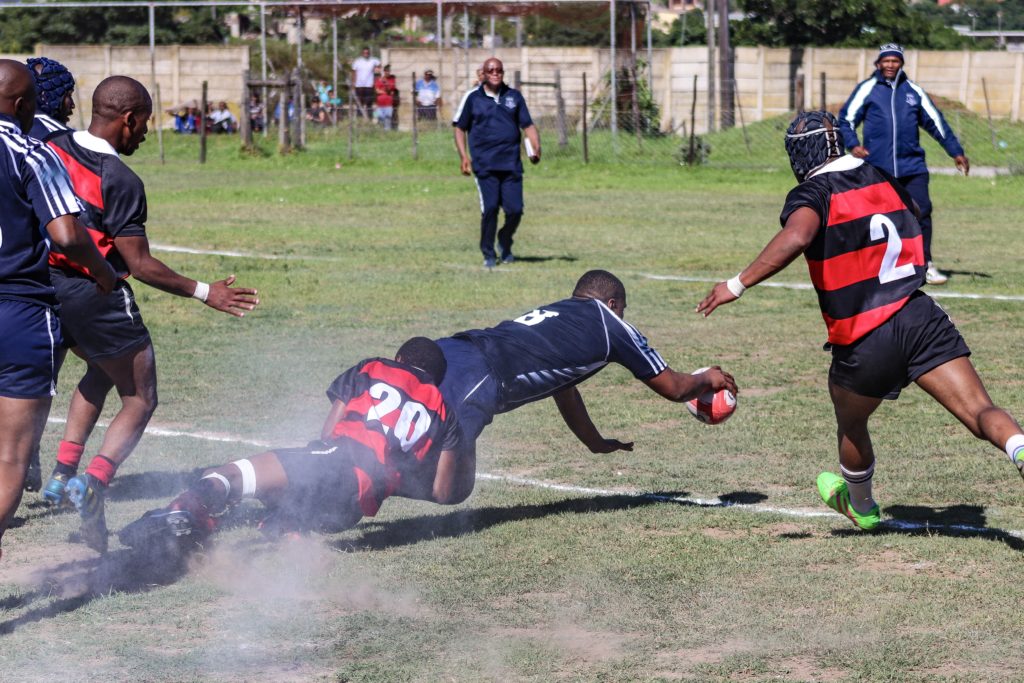 Lily Whites' eighth man dives over the line, running through an Easterns (PE) defender on his way, to score for the hosts. Photo: Stephen Kisbey-Green

The Lily Whites have been jubilant in their celebrations of their milestone in 125 years of existence. The Club hosted an Easter Tournament over 20-22 April, with two groups and eight teams in contestation from the surrounding areas.

Group A included the Brumbies, Old Collegians, Eastern Grahamstown and Zwide, while Group B saw the hosts, Lily Whites feature in the Group, as well as Winter Rose, Eastern Port Elizabeth and The Wanderers go head-to-head for ultimate glory. Wide, however, failed to show up for the tournament, meaning that they would forfeit their matches throughout the weekend by the maximum 28-0.

Saturday saw Old Collegians take the points from their scheduled encounter with Zwide, while Winter Rose bettered the Wanderers 27-5. Hosts Lily Whites beat Eastern PE 29-8 and the Brumbies won by a smaller, but still large, margin of 27-11.

Winter Rose got a second win against Eastern PE, winning 19-12 in a tight-finishing game with one try separating the teams, while the Brumbies beat Old Collegians 20-13 and hosts Lily White ran away 37-0 victors against a discouraged Wanderers side. Eastern Grahamstown were given their 28-0 victory over Zwide.

The Brumbies and Old Collegians remained firm in place to qualify atop Group A, while Lily White with their big win and most points, topped Group B’s day one proceedings with full points, with Winter Rose finishing second behind them.

The beginning of Sunday’s matches saw Eastern PE win 28-0 against the Wanderers, while the Brumbies received the points for their scheduled match against Zwide. Lily Whites won 34-16 against Winter Rose and Old Collegians won what was the tournament’s tightest game so far against Eastern Grahamstown by 24-19.

The semi finals saw the Brumbies, as Group A Winners, take on Winter Rose, as Group B runners up, while Group B’s top finishing Lily White took on Group A’s runner up, Old Collegians.

The Brumbies cruised to the biggest winning margin of the tournament, winning 39-0 against an unprepared Winter Rose to book a spot in the Final, while Lily Whites were able to shine on their way to their host tournament final, edging past Old Collegians 11-5 in their semi-final. Winter Rose did not make an appearance on the final day, and so forfeited the third place position to Old Collegians, with a default 28-0 victory.

The final of the Easter Tournament got underway, with the historic Lily Whites side taking on the Grahamstown Brumbies.

Lily Whites fell three points behind early on, before going over the try line to make it 7-3 early in the game. Although Lily Whites conceded a few penalties in the first half which the Brumbies capitalised on, the Lily White side led at the break 20-17. They were only to score again one more time, with the Brumbies scoring two tries to take an extremely tight 27-29 victory in what was an extraordinary final.