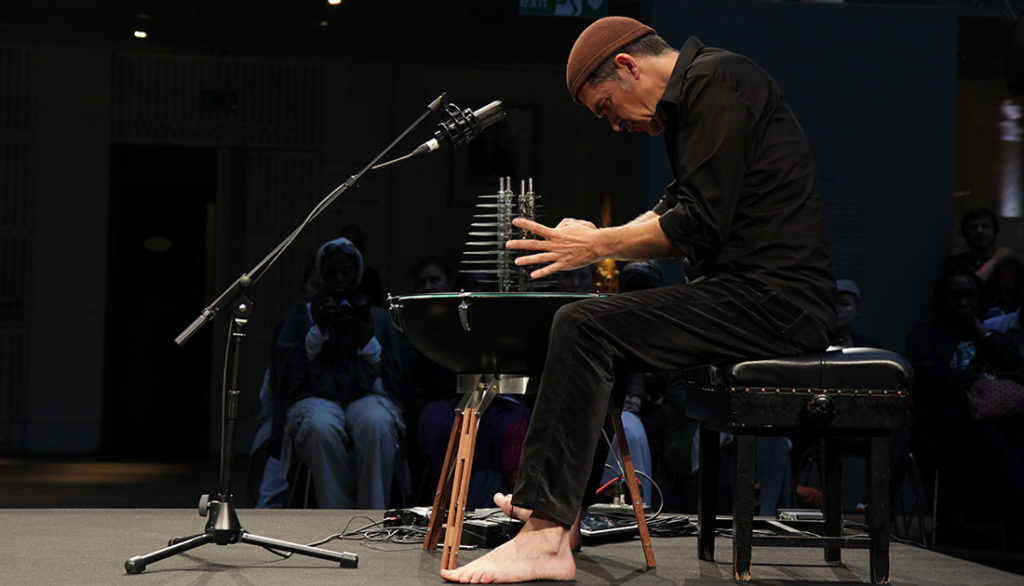 Innovative Angolan musician, composer, instrument maker, electronic engineer, and musicologist Victor Gama will perform a multimedia lecture at the Rhodes Box Theatre on Friday 26 April at 8pm. The performance-lecture is free and members of the public are welcome. As a composer, the genesis of Gama’s process is the creation of entirely new instruments, whose design is rich in symbolic meaning. Gama’s instrument design theory draws on traditional instrument technology and knowledge systems, particularly from Angola, together with cutting-edge technologies such as 3D-modelling, multi-physics simulation and digital fabrication. He holds a BSc in electronics engineering and an MA in Music Technology, and was recently guest artist at the Center for Computer Research in Music and Acoustics at Stanford University and at MIT Center for Art Science and Technology.

Gama creates music for dance, film, theatre and multimedia performances using his singular set of musical instruments as sound libraries. Since 1997 Gama has produced projects in Angola, such as Tsikaya the first digital music archive in the interior of the country, and Odantalan (2002), an international musical exchange and residency in Luanda that featured musicians and art historians from Colombia, Brazil, Cuba, Angola and Portugal. His debut album, Pangeia Instrumentos launched by Aphex Twin on Rephlex Records (2003) propelled Gama into the international arena with works for his series of self-designed musical instruments the Acrux and Toha.

His solo and ensemble performances have graced international stages such as the Concertgebouw, Carnegie Hall, Haus der Kultur der Welt, and many more. Among Victor Gama’s most prestigious premieres are Rio Cunene composed for the Kronos Quartet and presented at Carnegie Hall (2010) and his multimedia piece Vela 6911, performed by the Chicago Symphony Orchestra/ MusicNOW (2012). Gama’s largest work to date, the multimedia opera 3 thousand RIVERS which premiered in Portugal and Colombia, unveiled new adventurous directions for an opera of the South with field work in the rain forests of the Amazon. His latest piece, Aisa Tanaf: the Book of Winds premiered at the Kennedy Center in February 2017.

Friday’s performance-lecture is part of the Mellon 30th Anniversary Seminar Programme: Southern Epistemologies – Thinking Beyond the Abyss for a Transformative Curriculum. The Mellon Foundation manages an extensive international scholarship and academic fellowship programme at universities, colleges and research institutes. A collaboration by various departments, the seminar series aims offer the Rhodes University community a way of thinking through ‘curriculum transformation’ and decolonisation which is central to the project of transforming South African universities.

Tectonik:TOMBWA, a multimedia music performance, focuses on Augusto Zita N’Gonguenho, a young Angolan anthropologist who, in the 1980s, tried to write an anthropology of colonialism using both scientific and non-western methods such as divinatory practices that stemmed from indigenous knowledge systems. Unfortunately his research was interrupted by his sudden death in an apparent car accident in September 1987. His work was lost until the early 2000s, when notes he had taken during his research were discovered in South Africa in an underground base. It is now thought that the National Intelligence Service (NIS), the secret services of the apartheid South Africa, that had invaded Angola during the 70s and 80s, were behind his death. Links were found between Professor Augusto’s death and operations by the NIS to camouflage South Africa’s Nuclear Weapons Programme.

Gama was able to obtain and analyse Augusto Zita’s partially recovered notes. This solo research-based multimedia performance lecture, performed on two of Gama’s unique instruments, the Acrux and the Toha, is a small part of a recovery project that he has been working on since 2006.

Inspired by the shape of the Southern Cross star constellations, the Acrux’s vertically-stacked circular keys function similarly to those of the “thumb piano” (quissange, mbira, kalimba), and are housed in a large hemispherical structure made of fibreglass. The Toha was inspired by the weaver bird’s nest, which Gama terms “one of nature’s most astounding installations”. During the military upheavals in Angola from the late 70s onwards, “the nests were totally empty, you couldn’t see any birds. They all had migrated because of the conflict,” he says. Like these densely woven nests, Gama’s work — both the instrument and the resulting music — weaves together the complex strands of the cultural, political, social, spiritual, and natural. Admission is free. The performance is followed by a question and answer session with the artist. This project is supported by the Mellon 30th Anniversary Seminar Programme, Rhodes University together with an ANT Mobility Grant from Pro Helvetia Johannesburg financed by the Swiss Agency for Development and Cooperation (SDC), and INSTRMNTS (www.instrmnts.com).