Talking across the rifts in angry times 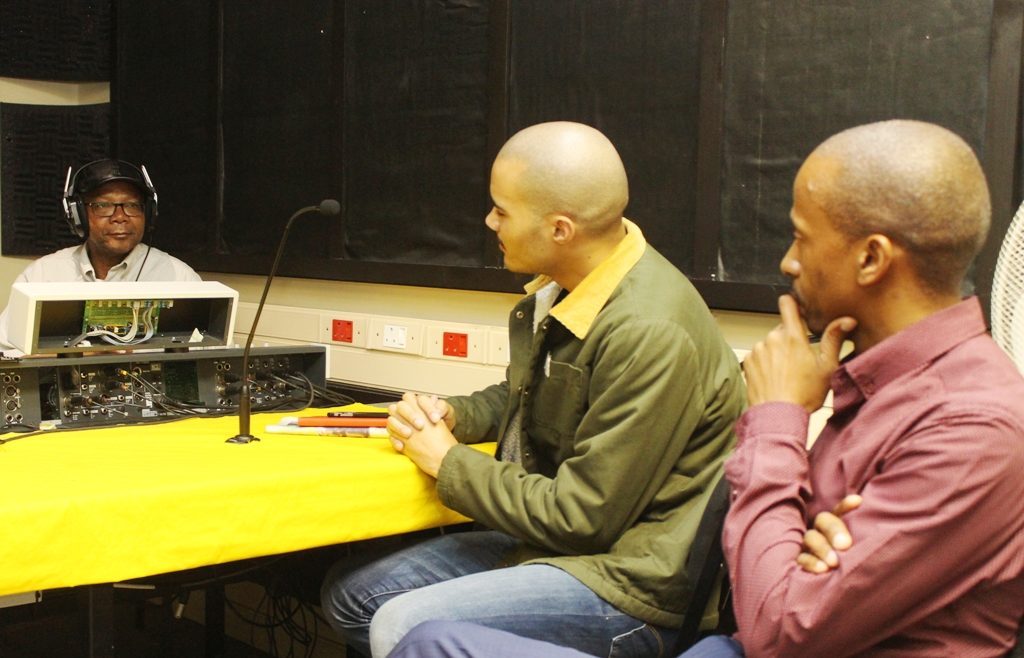 Mikhail Petersen and Kenneth Lukuko from the Institute of Justice and Reconciliation listen to a question from Shepi Mati in the radio studio at the School of Journalism and Media Studies, Rhodes University, on 15 April 2019. Photo: Sue Maclennan

Trust in public institutions is key to reconciliation, say experts in community healing Kenneth Lukuko and Mikhail Petersen. The pair from the Institute for Justice and Reconciliation (IJR) were in Makhanda (Grahamstown) last week to meet community members, NGOs and local government representatives.

The IJR visit was timed to coincide with the 200th anniversary of the Battle of Graham’s Town – a decisive event in the history of not only the town, but the nation. The bicentenary is one of the reasons Makhanda has been chosen to host the national government’s event for South Africa’s 25th Freedom Day celebrations on 27 April. The event, “Taking our pulse: have we achieved reconciliation after 200 years?’ at Fingo Library on 15 April was hosted by the Isikhumbuzo Applied History Unit of Rhodes University.

However, Lukuko and Petersen arrived at a time when residents’ confidence in Government could not be lower.

Twenty two thousand people – the same number who voted in the last local government elections – earlier this year signed a petition calling for the Council to be dissolved. After provincial politicians responded with a minor reshuffle of the local Cabinet, a coalition of civic activists mounted a court bid for fresh local elections and for the municipality to be put into the hands of a professional turnaround specialist.

During the two-month municipal workers’ strike that ended around three weeks ago, private citizens took rubbish collection and management into their own hands in some parts of town. Other areas have meanwhile grown new mountains of rubbish on the empty land between houses.

Makana’s water treatment failure of March 2018, when drinking water at certain sites tested positive for e.coli, again reared its head earlier this year. This time, the results were from samples taken in December 2018. By February, when the unsafe December levels were reported in a Council committee, the results had returned to within the SANS safety standard (except in Riebeeck East).

Makhanda is predicted to lose nearly half its water supply by the end of this month, when Settlers Dam becomes too low to extract water from it. East and west Makhanda will then have to alternate in receiving the supply from James Kleynhans Water Treatment Works on the east, with tanks placed in various areas for residents to collect water from during off-days.

Inferior planning for township sewerage systems combined with old infrastructure and little or no maintenance by municipal staff have left neighbourhoods drowning in dams of raw sewage for months on end, with houses and gardens regularly flooded.

Eskom’s threat to cut the electricity supply to Makhanda still hangs over the town’s head. The threat was deferred pending evidence that the municipality will honour the payment plan for its debt.

There’s never been a time when dialogue aimed at reconciliation is more needed.

Petersen acknowledges the IJR has a challenge in getting citizens to think about reconciliation.

“To say, ‘Yes, I know your material well-being is under threat and your physical needs aren’t being met – but let’s talk about these philosophical issues of reconciliation’ – that’s incredibly tough,” Petersen says.

“It’s difficult for someone to park those kinds of issues when your very day to day life is being turned upside down.”

But, he says, there’s never been a time when dialogue aimed at reconciliation is more needed.

“This is my first time visiting Makhanda and I can immediately sense that there are bubbling tensions,” Petersen says. “Conversations need to occur.”

Participants in the event at Fingo Library Hall on 15 April 2019: 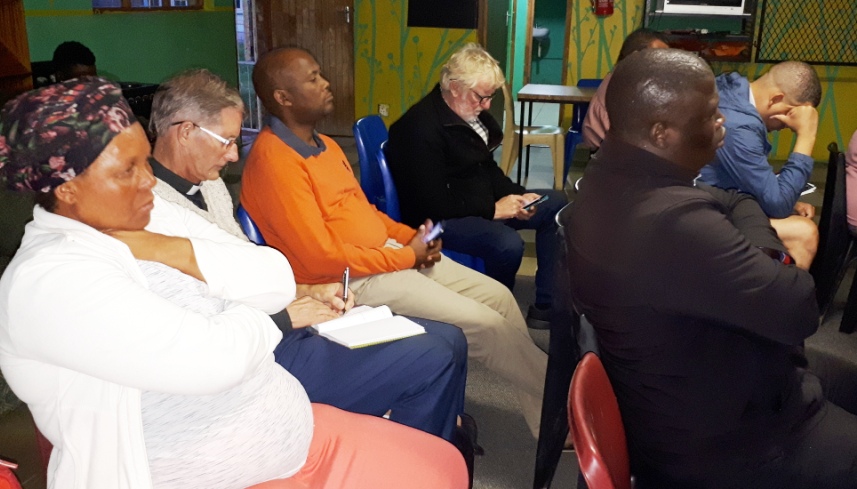 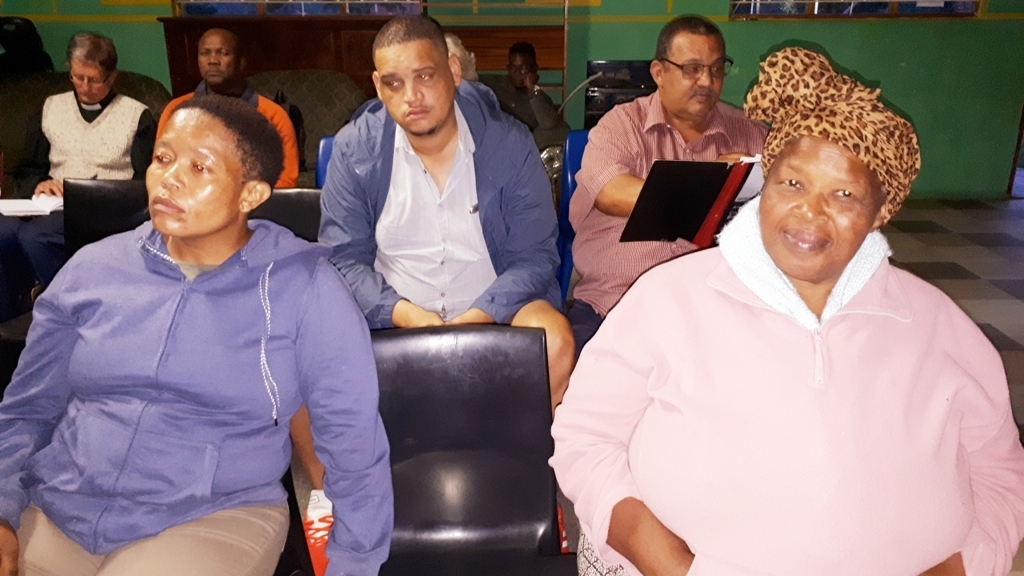 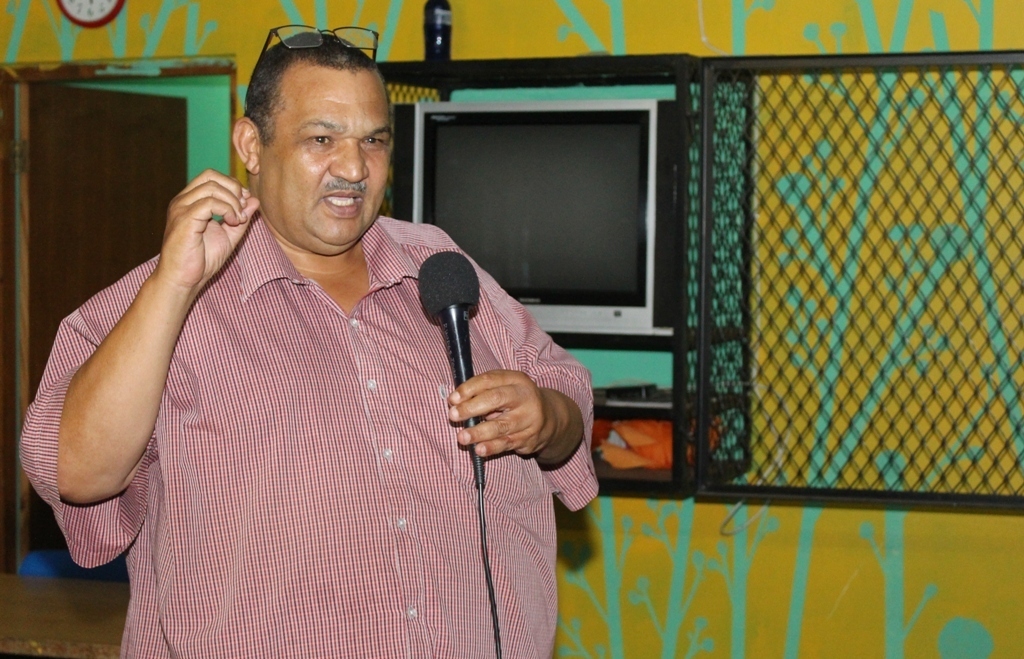 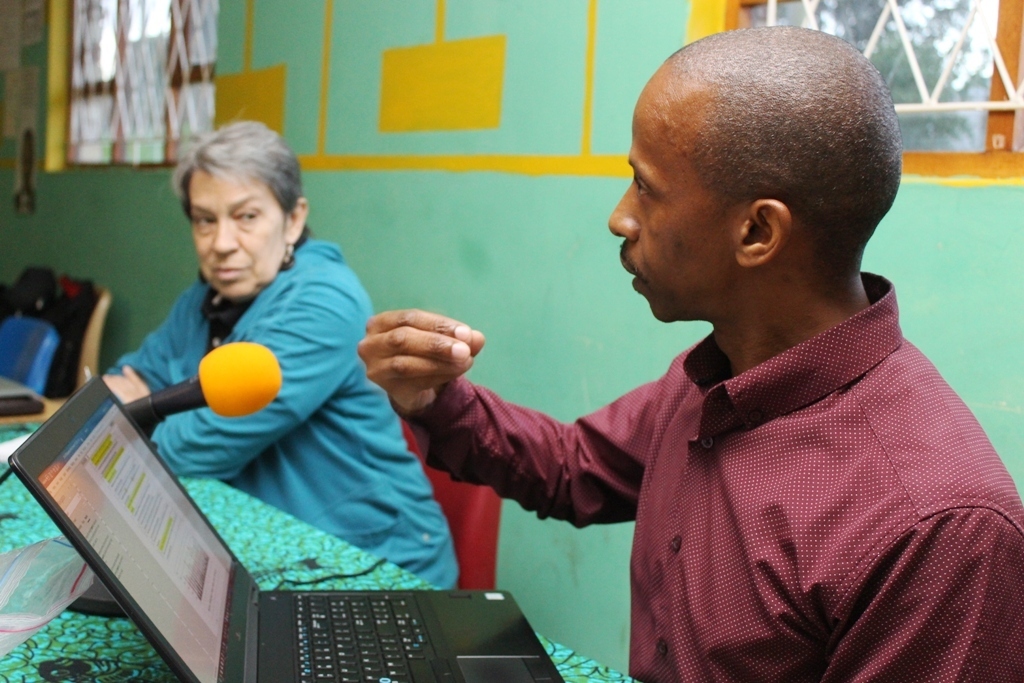 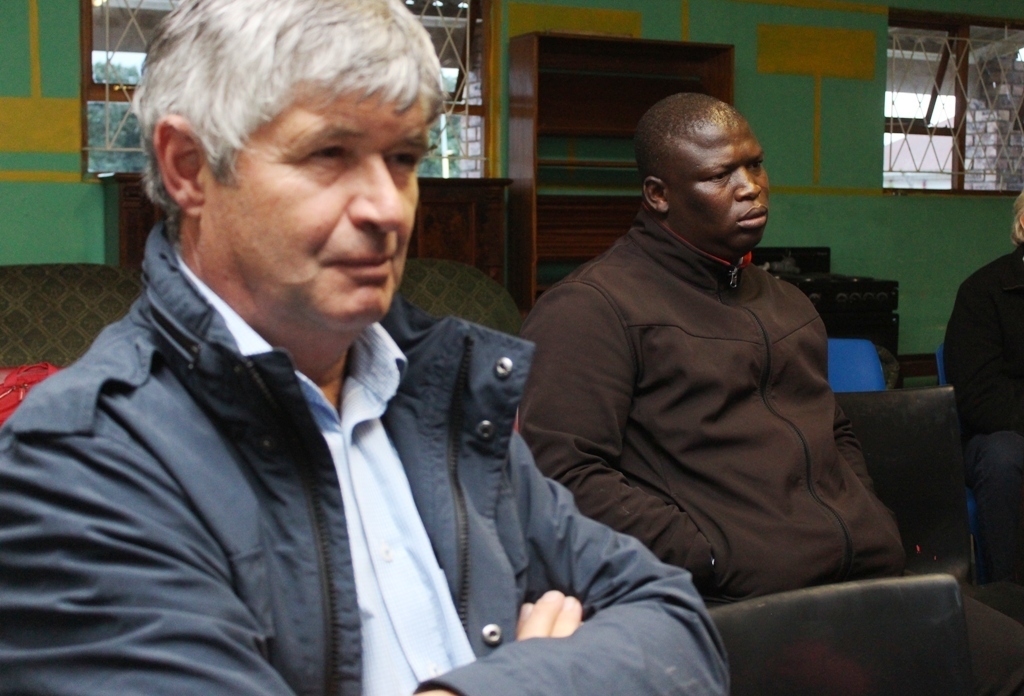 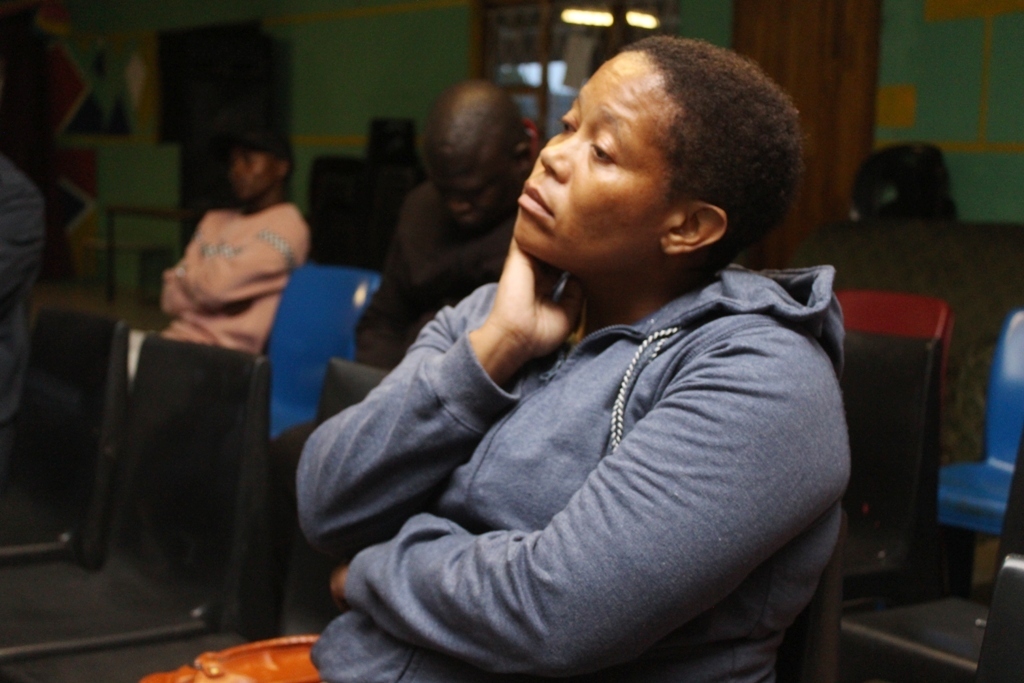 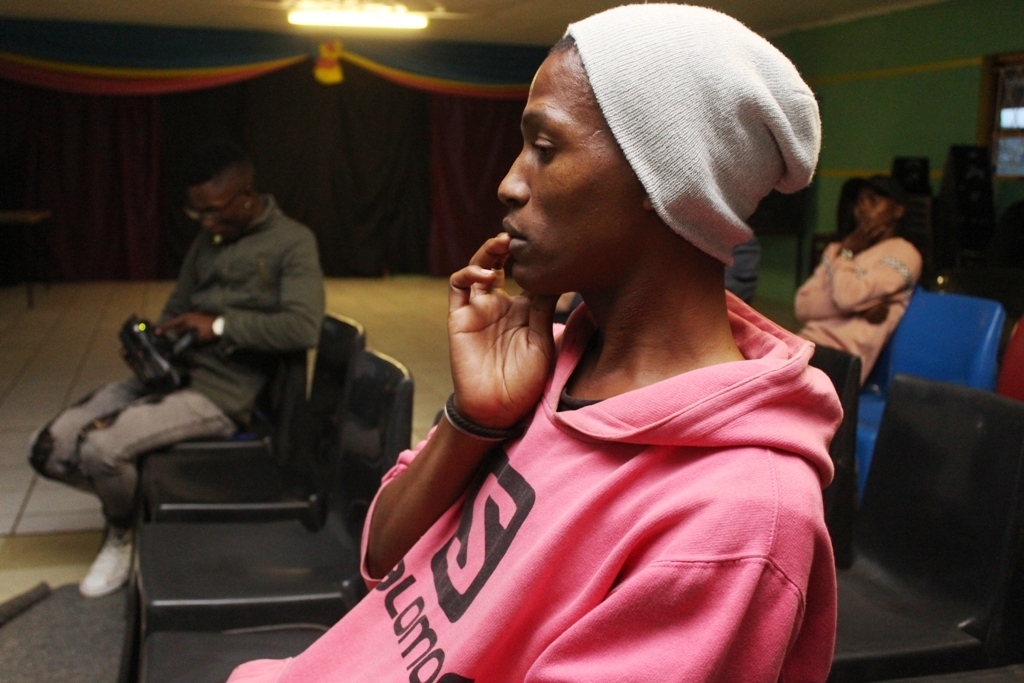 The IJR’s Sustained Dialogue Programme, where Petersen is based, holds that reconciliation did not end in the TRC and needs to continue.

“In the current context in Makhanda we can’t ignore these wounds,” Petersen says. “These difficult conversations need to be had so we can move forward and have a more unified society.”

Petersen believes that in Makhanda, groups operate in silos.

“[Within those divisions] is where attitudes of racism and other dangerous sentiments grow and spread.

“Opening up those conversations is essential to building an inclusive society and moving forward.”

First international relief and humanitarian organisation Gift of the Givers came to Makhanda’s rescue. Now the IJR, the last hope for the most strife-devastated parts of our continent including Rwanda, the DRC and  South Sudan, has moved in. Are we that close to collapse?

“Makhanda’s history has in it some of the harshest, most brutal conflicts in the country,” Lukuko says. “It’s not everywhere you find a town with the kinds of wars that happened here.

“When you come here – yes, there are still the separate parallel conversations. But if you just look at people, you actually see a lot of mixing in public and academic spaces, churches, schools.

“There are other places in South Africa where you just don’t see that. So Makhanda is not the worst.”

In its work here, the IJR has set about working with with local networks such as churches, schools and community organisations. Their local knowledge and experience, together with the IJR’s methodology of Community Healing is a model for social change using social cohesion, Lukuko explains.

“The challenge is how to give those attitudinal issues as much priority as service delivery issues,” he says.

The public dialogue held at Fingo Library last week was titled ‘Taking our pulse: are we achieving reconciliation after 200 years?’

“If service delivery issues are at the foremost of people’s minds, they cannot be ignored,” he says. “We need to work through them – but through the lens of social cohesion, healing and reconciliation.”

Government and governance is critical in reconciliation. It’s one of six indicators in the IJR’s Reconciliation Barometer.

“[The hypothesis is] if there’s improvement on these six things, there is a greater chance for reconciliation in the country to happen,” Lukuko says.

“One of them is trust in public institutions – Parliament, Cabinet, municipalities – it’s critical.”

This is particularly so when it comes to the issue of land, and land redistribution that the country needs to deal with.

“Municipalities need to be efficient [otherwise]it will simply add to the challenges we already have.

LISTEN TO THE FULL INTERVIEW HERE: