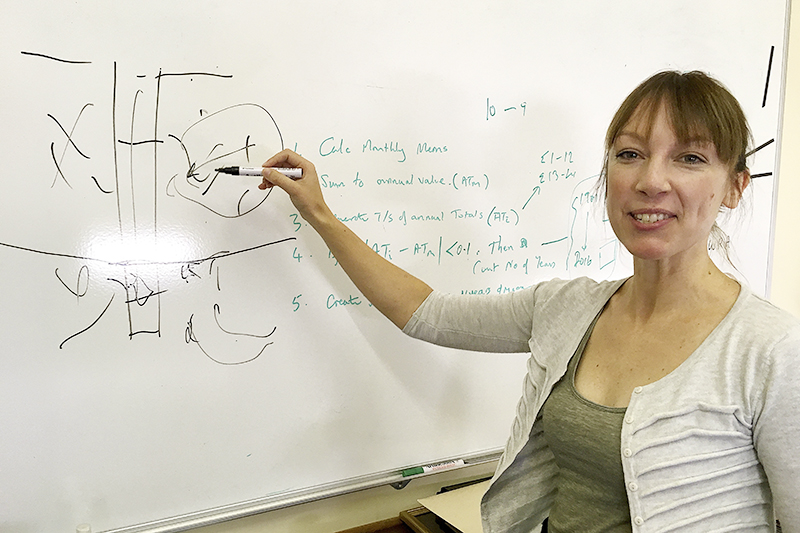 Dr Jane Tanner, Head of Hydrology at the Institute for Water Research (IWR), says Makhanda's boreholes should be monitored regularly to improve understanding of the aquifer’s medium- and long-term reliability. Photo: Steven Lang

Boreholes in the Makana area need to be monitored on a regular basis to find out how the current drought and associated additional groundwater use is affecting the sustainability of the aquifers. Several organisations and private individuals have commissioned boreholes on their properties over the last few months in an effort to cope with the current water shortages. While the boreholes might ameliorate the problem in the short term, there is uncertainty about their longer term sustainability.

Dr Jane Tanner, Head of Hydrology at the Institute for Water Research (IWR), says that many of these boreholes should be monitored on a regular basis to improve understanding of the aquifer’s reliability for the medium and long term. She says it is important to test as many boreholes as possible because the aquifers are extremely heterogeneous and boreholes can respond differently to pumping  even if they are near each other.

The ongoing monitoring carried out by the IWR has recorded up to a 2 metre drop in groundwater levels in some parts of town which is a reflection of the reduced recharge of the aquifers due to low rainfall, as well as the increased groundwater use. While the IWR supports the short-term use of extra groundwater to assist with drought relief efforts, they are trying to improve understanding of the potential for sustainable longer term use of the town’s aquifers. These aquifers can hold significant amounts of water but are complex to characterise and so we don’t have a good enough understanding of their recharge by rainfall, and how much storage they hold.

Tanner has therefore appealed to everyone in Makana who has a borehole to contact her urgently so that someone from the IWR can arrange to do the monitoring. She explained in her appeal that all data collected will only be used for scientific purposes.

If you are interested in helping secure the water supply of the Makana area for the future, please contact Dr Jane Tanner on the following email: J.tanner@ru.ac.za.

Makhanda/Grahamstown is situated within the Cape Fold mountain belt in a type of bowl between Botha’s Ridge and Mountain Drive ridge. There are three main types of rock in the area: quartzite, shale and Dwyka tillite. The differences between these types of rock determine how suitable their borehole water is for treatment.

Layers of sandstone and shale were formed at the bottom of a shallow sea in our area between 500 and 330  million years ago, before tectonic pressure from the south caused these rocks to fold forming a mountain range, the Cape Fold Belt. When sandy sediments settled on the sea-bed it eventually formed sandstone which under pressure and heat eventually became quartzite. Under calmer conditions, mudstones were deposited which  eventually transformed into shale rock.

The pressure which led to the folding mountain range caused the quartzite to fracture and thus create irregular networks of cracks and fissures that are today the best sources of water in Makana.

People in this area who drill boreholes in search of water look for suitable fissures in quartzite and hope that the cracks they find are part of larger productive networks of fissures (faults). Although the quartzite rock is very fractured and so the chances of finding groundwater are high, a borehole which intersects a larger fault zone will have a higher yield.

Shale is less prone to fracturing and therefore retains less water. Many of the boreholes in the Makana area have to be quite deep (more than 100 metres) because the fractured quartzite can lie below layers of shale.

Around 310 million years ago around the time the Cape Fold Belt Mountains began to form, South Africa was located close to the South Pole. An ice sheet, probably several kilometres thick covered southern Gondwana including South Africa. . Glaciers crushed rocks as they moved over the terrainand eventually deposited a sort of mix-mash of various types of rocks in the valleys. Today geologists recognise this mix of crushed rocks as Dwyka tillite. These glacial deposits are found over much of Makhanda/Grahamstown and retain saline water that is not of good quality for treatment.

The three main types of aquifer found in Makhanda/Grahamstown therefore include quartzite (found on Mountain Drive ridge and Botha’s Ridge, shale found to the west of the town, and tillite, covering most of the town. The best quality groundwater is found in the quartzite aquifers, while shale aquifers yield groundwater with a high iron content, and tillite aquifers yield highly saline water.