Roll up for all the fun of the (book) fair 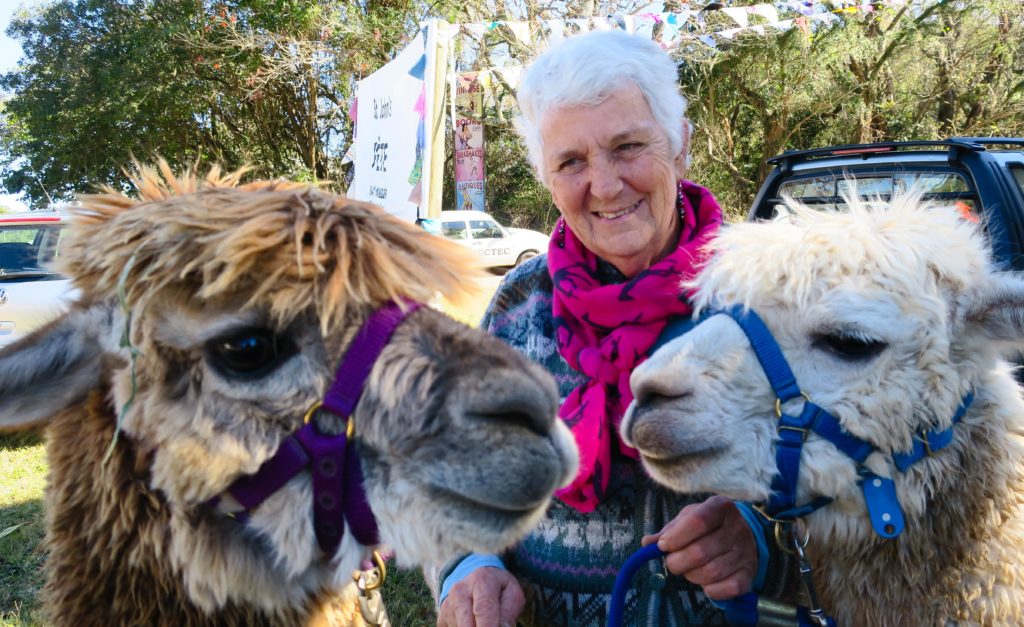 Mary Riley, with her Alpacas, who hosted a children's story corner at the 2019 Bathurst Book Fair. Photo: Marian Whitehead

Bathurst is gearing up to host the 16th annual Bathurst Book Fair on Sunday 28 April from 9am to 3pm.

Book lovers can look forward to an even bigger bookfair this year with marquees at the Village Green and Books of Bathurst and book dealers’ stalls spread across the village.

There will be a wide selection of books, ranging from collectibles, travel books, fiction, memoirs and biographies to sport, children’s and general interest books.

Book signings and readings from six local writers will also be on offer (see programme below) along with the ‘Round the Bend’ poetry event, children’s story time with Bathurst’s famous alpacas. Browse seven venues in the village, from the Village Green to The Workshop. Be entertained at Books of Bathurst by local authors speaking about writing and giving tips on getting published.

Visitors can revel in looking for and finding sought-after books, both out of print and new.

Admission to the bookfair is free of charge and everyone is welcome. There will be food stalls, pony rides, music, tea, cake and a beer garden.

11.30am Round the Bend poetry event
Poet Derrick Newson presides over an open mic poetry reading

12 noon Kiddies corner
Mary Riley, author of Pablo & Pepito, reads her book to young readers and introduces them to the two alpaca heroes of her story.

12.30pm The self-publishing game … or is your book better as a film?
Rod McGregor Mann, author of Librarians and Other Criminals and founder of The Hornbills Literary Agency

1.30pm Should the facts get in the way when telling a good story?
Author and raconteur Bartle Logie in conversation with his publisher Frank Nunn

2.30pm Animals in literature and life – why should we pay attention to them?
Poet, author and academic Dan Wylie mulls over some possible answers

9.30am Talk: Understanding one another’s cultures
Is it possible to write about a culture that is not your own? Author Eve Clayton took on the challenge in her novel, Thwala, which examines the practice of ukuthwala (forced marriage through abduction in Xhosa culture) through the story of a young girl impregnated by a white farmer. Her novel was born out of a desire and a compulsion to try to understand more about our diverse and divided society and bridge the cultural divide. She talks about the quest of authors, artists, dramatists and musicians to transmit, interpret and expand the emotional range and understanding of each person we come into contact with.

Eve’s Bio
When Rhodes University speech & drama graduate Eve Clayton turned 60, she made up her mind to self-publish her novel, Thwala, no matter what. Over the years, she’d written a number of things – a historical saga, a TV script, a short story, but none were published. In 1994, she started teaching at Shaw Park Primary, a small, white farm school ear-marked for closure. As principal she opted to open the doors to all rather than closing, and the Model C School became a haven for black parents desperate to access decent education. Numerous dramatisations and school plays kept the pen in hand. During a break from teaching, she wrote the first version of Thwala, using insights gained from the rich cultural mix of people in her daily life. She describes the self-publishing route as “an extremely tough, thrilling and rewarding journey. And I haven’t reached the destination yet.”

10.30am Talk: Writing a sense of place
Monty Roodt’s debut novel, Dead Mans Land, is set in the Lower Albany district, but mainly in the historic village of Bathurst/Nolukhanyo and is as much a crime novel as it is an evocation of the surrounding landscape and its people. It is an attempt to illuminate the sociological and historical heritage that is still playing itself out today as the area struggles, encumbered by colonial traditions based on race and class, towards a redefinition of relationships in a post-apartheid South Africa.

Inspired by the Scottish crime writer, Ian Rankin, known mostly for his Inspector Rebus novels, in which the city of Edinburgh is as much of a character as the fallable humans that populate it, Roodt’s Bathurst and its hinterland are likewise at the centre of his writing. His book and talk, whilst dealing with serious issues that beset the locale, are also an ironic and humourous elicitation of local characters.

Monty’s Bio
Monty J. Roodt is an Associate Professor in the Rhodes University Department of Sociology, an author and photographer, who grows indigenous trees, likes to garden, and make cheese. He lives on a smallholding in Bathurst, with his family. He completed a creative writing course at Rhodes University and considers himself a connoisseur of good crime/spy fiction. Dead Man’s Land: No 1 of the Bathurst Chronicles – A Bernie Bernard crime novel, although not his first novel, is the first one to be published. It is available on Amazon Kindle as an eBook, and from Monkeytown Publishers as a hardcopy.

11.30am: Round the Bend poetry event
Derrick Newson presides over an open mic poetry reading.

12 noon Kiddies’ story time: Pablo and Pepito
Mary Riley is a semi-retired physiotherapist who has lived in Bathurst since 2011 with her large family of animals. She has two sons and originally wrote her storybook, Pablo and Pepito, for her 4 grandchildren. Her two alpacas, Pablo and Pepito, were born at Blue Moon Alpacas at Greenbushes, Port Elizabeth. Her book is the story of some of their adventures, charmingly illustrated by Tori Stowe of Bathurst.

12.30pm Talk: The self-publishing game – or is your short story/novella/novel better as a film?
Rod McGregor Mann, author of Librarians and Other Criminals (self-published), poses this question and discusses the opportunities presented at a time when on-line streaming services are ‘publishing’ more and more films and TV series as the number of books coming out of publishing houses diminishes.

Rod’s Bio:
Rod McGregor Mann writes principally for the small and large screen. He has won several prestigious awards for his work with the likes of the SABC and Viacom. He’s also directed and produced. His feature film, The Sheltering Desert, was joint winner, together with Athol Fugard, for an M-Net Vita Award for best screenplay. He enjoys Detective Noir, a genre in which the bad guys are often the heroes.

1.30pm Talk: Should the facts get in the way when telling a good story?
In his 9th book, Toasted Marshmallows & Obies, adventurer, historian and raconteur Bartle Logie offers a very entertaining mixed bag of 72 short, sharp stories. We get a glimpse of his life and adventures as a young man in England and the Cape, as well as anecdotes from his childhood visits to the Lower Albany area in the Eastern Cape, where his father was born and spent his early years.
Interspersed are acute, insightful and entertaining observations of the people, the rich history and the diverse flora and fauna of this fascinating region of the Eastern Cape. Bart talks about how he goes about unearthing these details, both on the ground and from reference material, in his special easy-going, personal story-telling style.

Bart’s Bio
Bartle “Bart” Logie is a retired teacher and former headmaster of Woodridge Prep School (an independent school near Port Elizabeth), who now lives in St Francis Bay. His interest in the history of the Eastern Cape has led to magazine articles, reports and publications about places such as Humansdorp, Uitenhage, the Baviaanskloof Mega Reserve and the village of Hankey.

Together with his wife, Caryl, a keen botanist, he has been involved in a variety of projects connected with the preservation of biodiversity in the Eastern Cape.
Toasted Marshmallows and Obies is his ninth book and is a combination of travelogue, local history documentary and fireside story, told in a free-flowing, easy-to-read and relaxed style. His approach combines meticulous research with hands-on, personal experience of the places and people he describes. Bart and Caryl have probably logged more kilometres, both on foot and by car, since he retired, than the average person does in a lifetime!

2.30pm Talk: Animals in literature and life – why should we pay attention to them?
Poet, author and academic Dan Wylie mulls over some possible answers and approaches, via some of his mother Jill Wylie’s wildlife rehabilitation projects in eastern Zimbabwe, and his recent books on elephants, crocodiles and dogs.

Dan’s bio
Prof Dan Wylie teaches English at Rhodes University and has published two books on Shaka (Savage Delight: White Myths of Shaka and Myth of Iron: Shaka in History, both UKZN Press); a memoir titled Dead Leaves: Two Years in the Rhodesian War (UKZN) and several volumes of poetry. Most recently, he has concentrated on ecological and animal concerns in literature, founding the annual Literature & Ecology Colloquium in 2004. Recent publications are Elephant and Crocodile, (both with Reaktion), Raven Games: New and Collected Poems; Intimate Lighting: Sydney Clouts, poet (UNISA); and Death & Compassion: The elephant in southern African literature (Wits UP).