My very own Willy Wonka 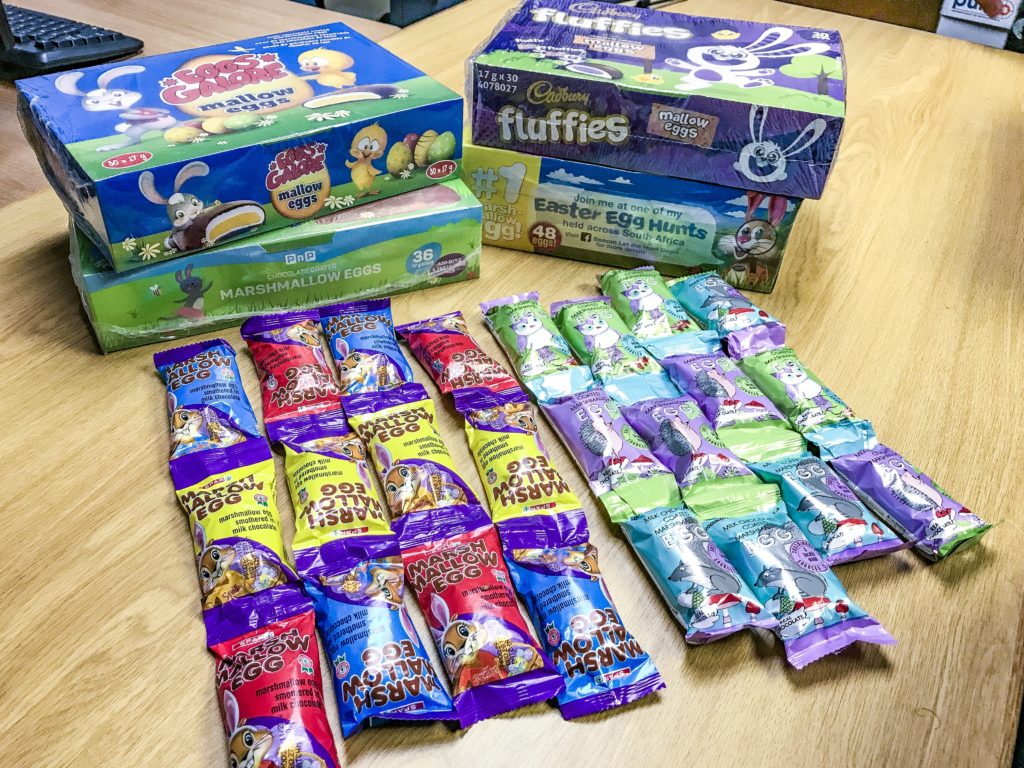 Six separate brands of Easter Eggs were tasted by a group of marshmallow connoisseurs to find out which egg stood tall. It was found that Eggs Galore was the overall favourite of the judges. Photo: Stephen Kisbey-Green A lot of children must have dreamed about visiting a chocolate factory when the movie Charlie and the Chocolate Factory came out in 2005.

Well, my brother and I lived that dream. Not only did we get to visit a chocolate factory, but we even had our very own Willy Wonka in the form of our mom.

Our mom worked for Cadbury Chocolate in Port Elizabeth the 1980s, where a shop on the premises sold chocolate off-cuts: crunchie without the chocolate on, chocolate-covered peanuts and raisins and Whispers, which were chocolate-covered shortbread balls. These were my absolute favourite and at least once a month Mom would bring us some of these treats.

One day, I had to go to work with Mom. I’d been throwing up all night, and the next day I felt really sick. I couldn’t go to school and there was no one at home to look after me.

My mom had a couch in her office and, as I lay there there feeling like I was going to die, a man came in dressed in a white lab coat. His pockets were crammed with chocolate, fresh from the factory, that he’d brought just for me.

I took one look at them and threw up.

He was very sweet and told me I could keep them in my mom’s cupboard for the next time that I came to visit her at the office.

Mom’s job mainly consisted of pricing the chocolates. She would have to work out how much it took to make the chocolates and then help calculate how much they should charge for them in the supermarkets.

But there was another aspect to her job.

Some would say she was Willy Wonka herself. Because while she never actually worked in the factory to produce the chocolate, she had the dream job of being the chief taster.

Every morning, she’d receive a tray of samples of chocolate that had been made overnight. She would have to taste it to check that the mix of cocoa powder, sugar and milk was just right before they were dispatched.

If she was happy with the chocolate, off they would go to the shops. But if there was a problem, they would have to make that batch of chocolate all over again.

It sounds like a dream job and I think it was. But there really is such a thing as too much chocolate and after a while she got tired of it. After she left, it was more than a year before she could face eating chocolate again.

My all-time favourite memory is a tour of the factory. One day during the school holidays, my mom came home and told my brother and I that she was going to take us to the factory for a tour. We were so excited.

So the next day my brother, my granny, my two cousins and I were off to the factory with Mom. We had to put on hair nets, lab coats and shoe covers. We started off in the first section, where they have these big machines that mix all the ingredients.

We were each given given a spoon and got to dip it into the chocolate while it was being mixed and take out a scoop. In the next section, the chocolates were put on to a long conveyer belt that moved them to the wrapping and packaging stations. We were allowed to take a chocolate off the conveyer belt before it was wrapped.

It was a child’s dream come true and I’ll never forget that day as long as I live. Nor the one after: thank goodness there was no school, because we all felt sick from eating far too much chocolate…

Back then I would have never thought that I’d lived a Charlie and the Chocolate factory kind of life, but nowadays, I would definitely say that I was Charlie and that my mom was my very own Willy Wonka.