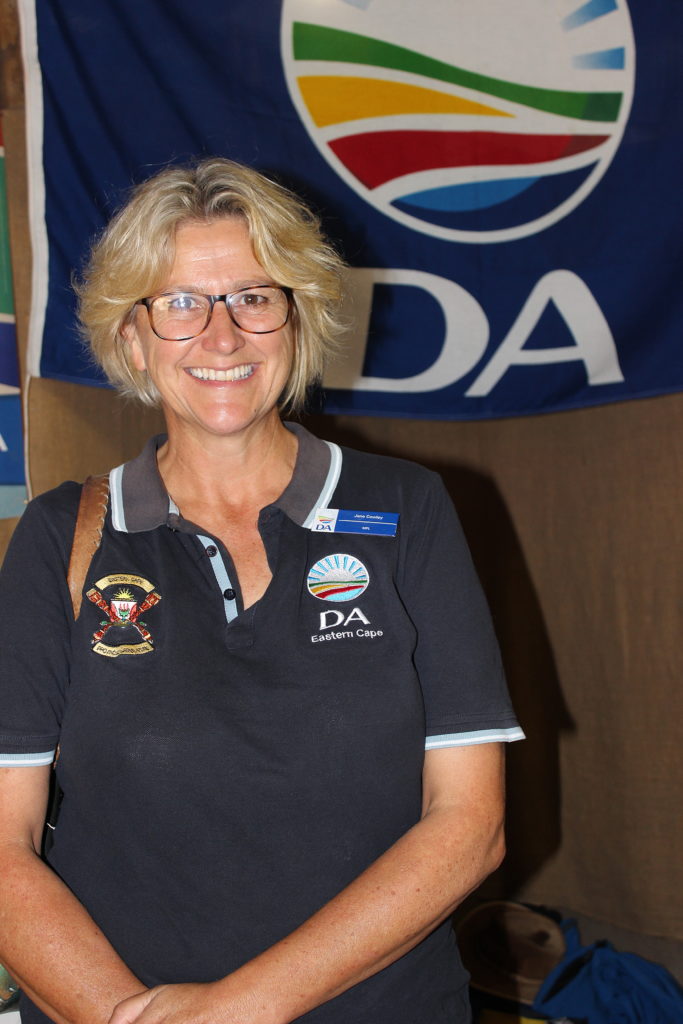 Jane Cowley is a member of the Eastern Cape provincial legislature and leader of the DA s Frontier Constituency. Photo: Steven Lang

The Democratic Alliance (DA) is hoping to increase its representation in the Eastern Cape Legislature from 10 to 13 seats. It is also prepared to consider a coalition government in the province to oust the current majority party, the African National Congress (ANC)

This is the view of Jane Cowley, a member of the Eastern Cape provincial legislature in Bhisho and also leader of the party’s Frontier Constituency which includes Makhanda and Port Alfred. She was speaking to Grocott’s Mail at the Bathurst Agricultural Show where the DA usually has a stall to keep contact with the rural and farming communities in the area.

Cowley says the Show has a friendly atmosphere where it is possible to interact with people and talk about topical issues in the media. This year the main talking point is about Eskom, and the party is trying to collect 500 000 signatures to reopen the debate in Parliament on how it can be rescued. She says the DA has a seven-point plan for its rescue which is quite doable and manageable.

Cowley recognises that she might be too optimistic about unseating the ANC in the Eastern Cape, “but we’ve done such a lot of hard work. We’ve worked the length and breadth of this province”.

Cowley said that although these are provincial and national elections, local issues will often influence the way people vote. She says her party makes an effort to inform voters about the different roles of the various tiers of government, but this does not always make a difference as many people choose a party based on how hungry they are.

Speaking to the people of her constituency, she said that it was important for residents of Makana to “… stand up and vote their corrupt, current government out of power. They can’t do it now, because it’s not a local election, but we’ve been pushing very hard for the dissolution of Council in Grahamstown”.

Cowley said that the current government has failed the people of Makana completely. “There is no service delivery to speak of. I personally have been collecting rubbish on the back of my bakkie and taking it to the rubbish dump”.

She also decried the inability of the administration to fix the situation and turn the municipality around. She said, “The sewage system has collapsed. I do work in Extension 7 and Extension 10: there are cesspools, where the sewage runs down the street on a daily basis and has done so for months.”

Nationally, the DA aims to win as many votes as possible because it believes that now, more than ever, the country needs a strong opposition. It has a plan to bring the ANC down to under 50% in the Northern Cape and in Gauteng. It also intends to retain the Western Cape and have a positive impact in all the other provinces.