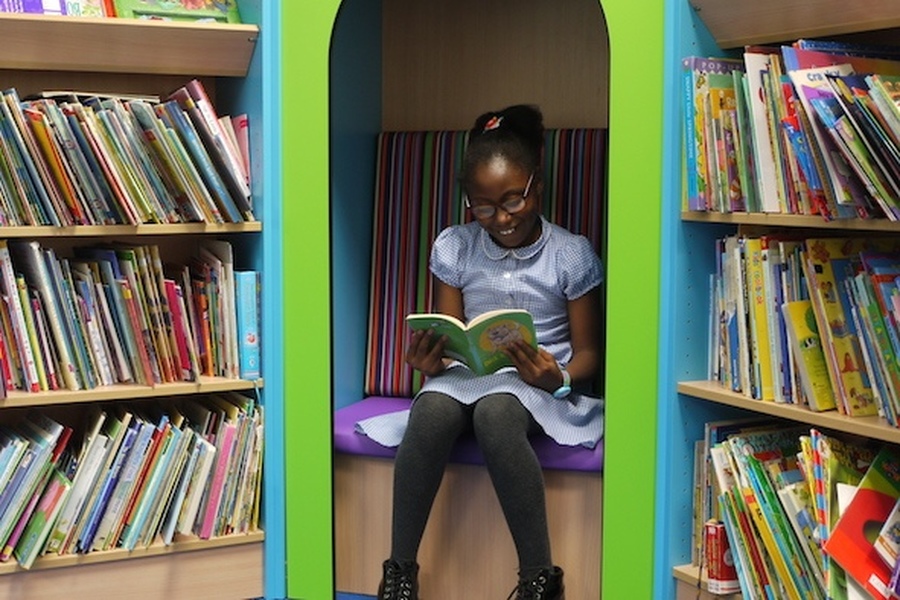 The Department of Basic Education says it's making headway with school libraries or media centres but a local literacy organisation says not so much. Photo: Maypole Primary School

The Department of Basic Education (DBE) recent announcement that it is making headway in providing libraries or media centres to schools, has been challenged by a local literacy organisation.

According to the 2017 School Monitoring Survey (SMS) announced by Minister Angie Motshekga on Monday, learner access to libraries increased from 45% in 2011 to 62% in 2017.

DBE Director for Research, Stephen Taylor, said, “It is encouraging to note that this increase has been largely pro-poor, with the largest improvements having been among Quintile 1 to 4 schools.”

Libraries are only really effective in schools where there is a teacher-librarian or other dedicated person… facilitating access for the learners.

However, Cathy Gush, Literacy Co-ordinator at the Lebone Centre in Makhanda (Grahamstown), Cathy Gush said she remained “cynical” about the reality of learner access to libraries and books in schools, especially in Eastern Cape schools.

“The statistics showing improved access to libraries is encouraging, but this is a national survey and does not give an indication of whether the improved access is concentrated in one area or spread across all provinces,” she said.

“Also, our local experience of providing funding to school libraries through the Friends of the Library (made possible by a bequest from former Rhodes Vice Chancellor, Dr Derek Henderson) has shown us that libraries are only really effective in schools where there is a teacher-librarian or other dedicated person opening up the library and facilitating access for the learners – and this is very seldom the case. There could be increased access in theory, but very little in practice,” Gush said.

Reading for enjoyment or extension needs to be mediated by an enthusiastic adult.

“The Equal Education campaign launched some years ago was adamant that it should be ‘One school, One Library, One Librarian’. The classroom library project run by the Lebone Centre in four schools as part of the Vestas-funded Primary Education Project has shown that this approach provides much more immediate access to reading material in classrooms, with an increased uptake by learners. The important thing is that reading for enjoyment or extension needs to be mediated by an enthusiastic adult.

“Furthermore, the Eastern Cape branch of LITASA (the Literacy Association of South Africa) has helped to bring The Bookery project (operating as an NGO) to the Eastern Cape – supporting low quintile schools to establish school libraries and appoint library assistants. The demand from schools has been considerable, which would indicate that very little is happening from the government’s side.

“If Mr Taylor or the Minister could provide us with some more nuanced information regarding the increased access to libraries, and actual usage, I would be happy to be proven wrong, but until then I remain cynical,” Gush added.

This is deeply troubling. We must do more to support our teachers.

The Survey revealed that the number of teachers who are absent from school on a daily basis increased from 8% in 2011 to 10% in 2017.

“The survey recorded an increase in the national aggregate absence (from 8% to 10%) on an average day,” Motshekga said on Monday.

“This is deeply troubling. We must do more to support our teachers. There’s a need to drill deeper into the statistics to understand this leave of absence phenomenon,” Motshekga said.

She said the department was monitoring teacher absenteeism as valuable time for teaching is lost when a teacher is absent from school. “If a teacher doesn’t turn up, you have children who sit around at school without a teacher.”

On the positive side, the survey revealed that there was a substantial increase in the percentage of schools where the SGB meets the minimum criteria of effectiveness, with the largest improvements seen among Quintile 1 schools.

Although not strictly comparable, the survey also suggests that there may have been improvements among the number of schools where all allocated teaching posts were filled.

But despite the progress made, the School Monitoring Survey also showed areas that require improvement and further support.

On infrastructure, the survey showed that only 59% of schools comply with nationally-determined minimum physical infrastructure standards.

Finally, the 2017 Survey also provided insights on some interesting trends concerning school management practices, such as the increased practice of centralised procurement of textbooks by provinces, as well as the relative importance placed on various school management documents.

Concluding the briefing, Motshekga acknowledged that the survey presented a mixed bag, adding that more work needs to be done.

“The information provided by the 2017 School Monitoring Survey will enable the department to fulfill its mandate of monitoring and evaluating education provision across provinces.

“The survey will assist in informing the next administration where to focus and areas that require improvement,” Motshekga said.

You can read the full text of Motshekga’s address on the Schools Monitoring Survey here.