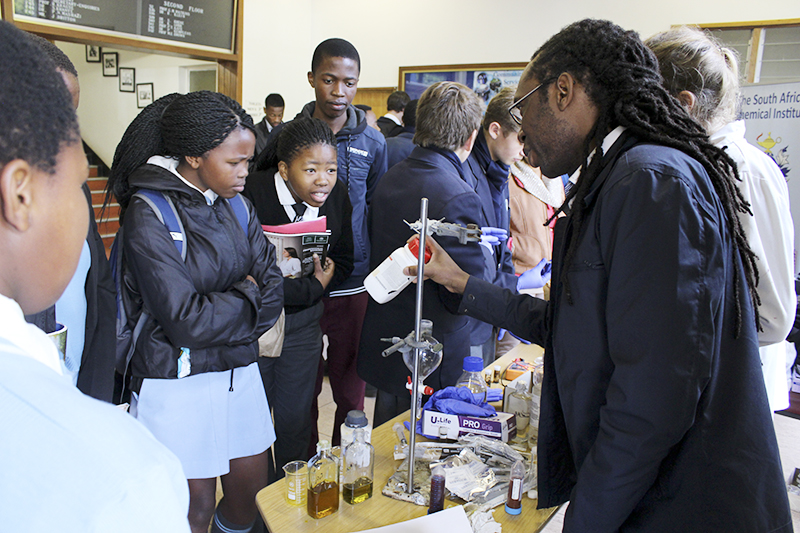 Rhodes Chemistry students demonstrate a concept to school pupils at the University's Science Faculty Open Day in July 2016. For Biotechnology students, communication is integral to the science itself and its application. Photo (July 2016): Sue Maclennan

Scientists often struggle to cross the rickety bridge that spans the chasm between themselves and the media. There are several reasons for this; one is the abyss between the two which appears to be infested with the monsters of sensationalism, ignorance and their offspring: inaccuracies and false expectations.

The gap between science and the media was the focus of a panel discussion entitled “Misunderstandings and Misuses: Science Journalism” held at Rhodes University on Thursday.

The discussion was part of the Academy of Science of South Africa’s (ASSAf) Embassy Lecture series.

The discussions leaned heavily on the side of the scientists with journalists largely being cast as mercenaries who will write anything to sell newspapers. Most members of the audience, and four of the five panellists were academics, who shared stories about how journalists often get it wrong.

Professor of Journalism, Harry Dugmore, expressed concerns about some of the questionable ethics of the media when he cited the example of news organisations that uncritically published research sponsored by Coca-Cola about the obesity crisis. This research attempted to shift blame for the crisis from poor diet to a lack of exercise and said we should rather seek an energy balance to lead healthy lifestyles. Dugmore said media organisations should not have unquestioningly accepted research that was so obviously agenda driven.

His second example was about the nefarious role of Ugandan newspapers that rode a national wave of homophobia with gusto, printing photographs and contact details of people who were reputedly homosexuals.

Dugmore said the newspapers actively spread dangerous myths about homosexuality when they should rather have taken on the responsibility of accurate reporting and showed why these myths are incorrect. They instead fuelled mob mentality to boost sales of their publications.

Schroeder, a German professor who heads up the Centre for Professional Ethics at the University of Lancashire, is concerned about the ethical obligations of scientists. She spoke about dubious practices among scientists who have been accused of conducting research of questionable ethical standards in foreign countries where requirements are not so stringent. This type of practice is known as ‘ethics dumping’.

Joseph was the lone voice defending the performance of journalists. She explained that turbulent changes in the media environment over the last two decades are partly to blame for the occasional mistakes in science stories in mainstream media.

Digital media has severely curtailed the strength of the once powerful legacy media who now have less money to spend on hiring competent journalists. Competition from all sides has put severe stress on business models of media organisations that not too long ago were quite comfortable.

When Joseph started her career in the early 2000s, newsrooms were filled with experienced journalists who over many years had specialised in their particular fields. They were older professionals who understood the requirements and pitfalls of covering their specific niches and were able to produce informed pieces of journalism.

In contrast, today’s newsrooms are sparsely populated with younger journalists who are expected to produce a wide range of items in diverse fields. They do not have the time nor the experience to create well-researched articles, so it should not be surprising that they produce weaker stories.

Limson made a presentation about her postgraduate biotechnology students who are taught how to engage directly with the public. Her students work on various projects that will use biotechnology to help people overcome practical problems.

In her innovative model, journalists are largely dispensed with as the emerging scientists interact with communities where they expect their research to be deployed. This type of engagement goes beyond communicating with ordinary citizens as the young scientists rely on the public to help shape their research.

Professor Soodyall, a world-renowned geneticist spoke at length about how a newspaper almost tarnished her reputation when it published an inappropriate headline on a story about her research into the population of Tristan da Cunha. Her angry reaction was never to speak to anyone from that newspaper ever again.

Her tale of caution, and other similar horror-stories shared at the panel discussion, served as a warning to the young scientists in the audience about engaging with the media. It can be dangerous and career-threatening which is why scientists are, broadly speaking, reluctant to speak to reporters.