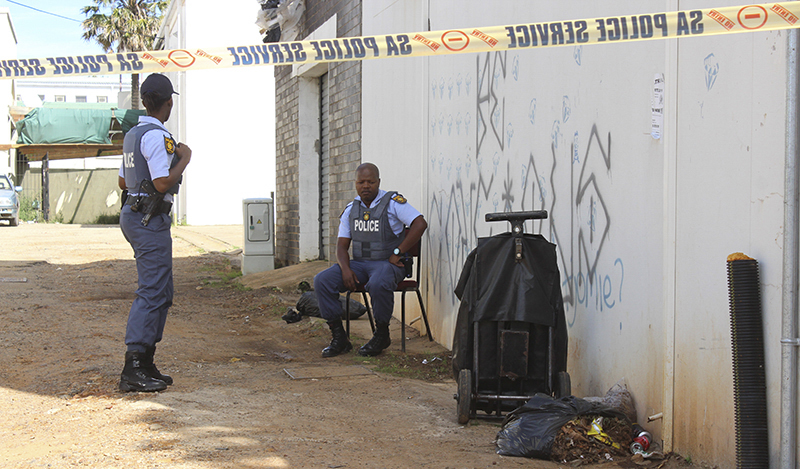 A cash services guard was treated for minor cuts on his head when armed robbers hit the Makana Finance Department in Makhanda (Grahamstown) around 9.30am on Thursday 28 March. Hi-Tec Security alongside police and traffic officers were soon out in full force securing three sites – the High Street offices of the Finance Department, the alley next to Colcade arcade, where a wheeled cash bag was dumped, and the corner of Speke and Henry streets, where one of two fleeing suspects was shot.

Police Spokesperson Brigadier Vishnu Naidoo said two armed men had entered the front office of the Finance Department – one of them dressed in municipal clothing.

“One guard was collecting cash. As the guard was making his way through the building with the money bags, the two male suspects overpowered him, pointed victim with their firearms and hit victim with the butt of a firearm over the head. The victim was also robbed of his pistol and his cellphone. At least two bags of an undisclosed amount of cash were taken from the victim and both suspects fled and exited through the back door of the building,” Naidoo said.

Spokesperson for G4S South Africa, Heinrich Hoffmann, confirmed a G4S employee was busy with a cash collection at Makana Municipality in High Street when he was overpowered by two unknown persons inside the building.

“The robbers hit him with an unknown object on the head,” Hoffmann said. “They grabbed the trolley containing one Glory bag with money and fled the scene on foot.”

Naidoo said two police officers were conducting patrols in the CBD and responded to the robbery.

“The members noticed two men running and boarding a white sedan vehicle. The members parked in front of the vehicles and instructed them to stop,” Naidoo said.

“The suspects then jumped out of the vehicle and fled on foot. The members made a U-turn and chased them and again instructed the suspects to stop at the corner of Henry and Speke Street.

“The suspect ran further and dropped the firearm and the two money bags on the ground. They collapsed about 50m away from the money bags and firearm. Both the money bags were recovered as well as a 9mm Lorcin pistol.  The injured suspect was taken to hospital under police guard.  The 72-hour activation plan was implemented and all the role-players were activated and attended to the crime scenes.”

According to a witness interviewed by Grocott’s Mail, the second suspect ran away.

Grocott’s Mail witnessed Finance Department staff being escorted out of the building, some of whom – shocked and traumatised – were taken to hospital.

Makana Mayor Mzukisi Mpahlwa said a report about the robbery had come during a special council meeting. Corporate Services Manager Nomathandazo Mawayi and Chief Financial Officer Gerard Goliath had been dispatched immediately to the scene.

“Councillors were shocked and we asked the CFO to ensure staff receive trauma counselling,” Mpahlwa said. “There will be CCTV footage that police will use to investigate this.”

Hoffmann said the G4S guard had a small cut on the back of his head. “Medical treatment was administered by the medical response team and no stitches were required.”