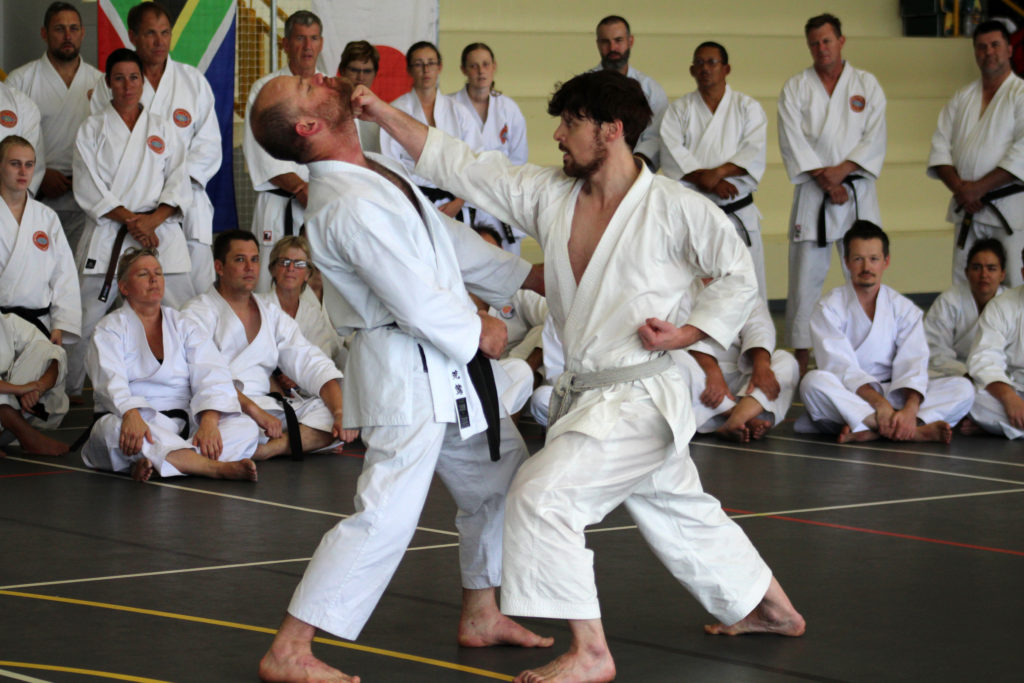 André Bertel Sensei’s return visit to South Africa was attended by close to one hundred participants from KwaZulu-Natal, Orange Free State, Western Cape, Eastern Cape and Gauteng over the weekend of 2-3 March. Bertel first visited and taught in South Africa in 2013. A large contingent of local karate practitioners based in East London, Port Alfred, Makhanda (Grahamstown), Somerset East, Cradock and Port Elizabeth were also in attendance.

The two-day Seminar was held at the Fairview Sports Centre in Port Elizabeth, and organised by United Shotokan-Ryu. According to USR Chairperson, Gary Grapentin, Bertel Sensei is a dynamic and inspirational teacher, with an unparalleled knowledge of Shotokan Karate as a form of Japanese Budo.

Bertel focused on the devastating self-defense techniques practiced in pre-World War 2 Shotokan Karate. Since the internationalisation of Shotokan Karate, many of these techniques and applications have been almost forgotten. “It is reassuring to know that this rich legacy is being preserved by a practitioner as devoted and accomplished as Bertel Sensei,” said Grapentin.

Originally from New Zealand, Bertel first travelled to Japan 26 years ago in order to hone his skills by training with some of the world’s finest Japanese Shotokan Karate Masters. Bertel currently resides in Oita City (Oita Prefecture) and has been a full-time resident in Japan since 2013. In addition, he received private and special tuition from the late Japanese Shotokan Karate Master, Tetsuhiko Asai Sensei (1935-2006) over a period spanning two decades. As a result, Bertel was one of the few students to be taught many of the ancient kata (forms) researched and refined by Asai Sensei.

Apart from his South African Seminar, Bertel will also present seminars in Germany, Portugal and New Zealand during the first half of this year. When he is not teaching overseas, Bertel instructs an ever increasing number of foreign karateka who seek out his training in Japan, as well as numerous Japanese karateka.

Previous ArticleKingswood kick off hockey season
Next Article Regardless of religion, colour, class or politics