Regardless of religion, colour, class or politics 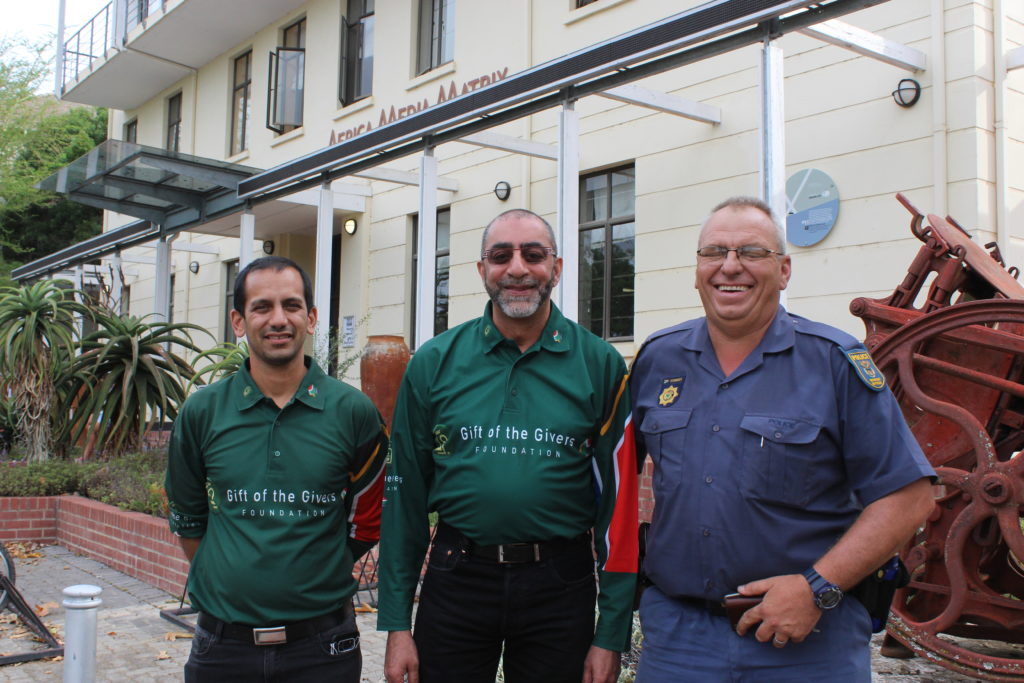 The Gift of the Givers came to Makhanda (Grahamstown) in its hour of need, and when many had given up hope our town could be saved. For insight into the force behind the extraordinary interventions of the past few weeks, we republish the citation for Gift of the Givers founder, Dr Imtiaz Sooliman, on the occasion of his being awarded an honorary doctorate at Rhodes University in April 2016. It was written by Professor Paul Maylam.

Think of any of the major natural disasters across the world during the past twenty years or so – earthquakes, tsunamis, floods, famine – and think, too, of the main human-made disasters – civil wars and violent conflicts, especially in the Middle East. Think of these and know that in most of these disasters Dr Imtiaz Sooliman and his organisation, the Gift of the Givers, have been there, providing speedy relief and support to the victims of unimaginable devastation. Know, too, the extent and range of their relief activities – putting up hospitals, running clinics; distributing blankets, clothing and food; digging wells; creating agricultural schemes, and more.

Having trained at the University of Natal’s medical school and then working as a doctor in Pietermaritzburg in the late 1980s, Imtiaz Sooliman founded the Gift of the Givers in 1992, prompted by two experiences. First, in 1990 he had travelled with a medical team to Mozambique, a country devastated by drought and years of civil war. Having witnessed the devastation he returned to South Africa, raising five million rand within five days as relief funding for the country.

Then in 1992, in Istanbul, he met a Sufi teacher who gave him a clear instruction: ‘You will form an organisation. The name will be the Gift of the Givers’ – its task to serve people in need, regardless of their religion, colour, class, political affiliation or geographical location – and he was never to expect anything in return. Dr Sooliman also remembers the influence of his mother, who stressed the importance of charity even though she possessed little of her own. As a young boy Imtiaz would walk long distances to deliver his mother’s food to the poor.

For its first five years the Gift of the Givers operated from an office in the Soolimans’ house. In time it would grow into the largest disaster response agency in Africa, today operating with a core staff of fifty, based in South Africa, Somalia, Malawi, Syria and Yemen. Its work over the past twenty-four years extensive and far-flung – conducting over twenty international missions; delivering 1.4 billion rands of aid to millions of people in forty-one countries; engaging in twenty-one different project categories.

The international missions are too numerous to recount in any detail. The first was in Bosnia in 1993 during the civil war in the former Yugoslavia – the Gift of the Givers arriving there with a fully-equipped, containerised mobile hospital – the first of its kind in the world to be developed – a hospital which included two theatres, an ICU, and more – a hospital where thousands of people would be treated and hundreds of babies born.

Consider the Gift of the Givers’ responses to natural disasters across the world: flying supplies into Mozambique during floods in 2000; after an earthquake in India in 2002, helping to construct a village for survivors; in 2003 delivering a million rands worth of aid to Iran following another earthquake; in 2004 being the first relief agency to respond to the devastating Indian Ocean tsunami – Dr Sooliman, on holiday at the time, at once activating relief work, organising the dispatch of 2000 tents from Dubai to Sri Lanka and sending a four-person team to the disaster-struck country. In 2005 another earthquake – in Pakistan – Dr
Sooliman sending in six rescue teams and aid worth 13 million rands, dispatched to inaccessible areas where roads had been destroyed. Then the Haiti earthquake in 2010 – Dr Sooliman assembling a rescue team within two hours of learning of the disaster, eventually sending over four teams and 500 tons of aid. The Gift of the Givers again the first to respond to the 2011 famine in Somalia – sending a thirty-person medical team and hundreds of tons of aid, and soon after this embarking on a second mission, providing medical care to victims of the Somali civil war.

Dr Sooliman has found the human-made disasters – the civil wars – the most disturbing and heart-rending. The Gift of the Givers has engaged in relief work in many of the worst conflicts of recent years, sending teams and aid to Afghanistan after the 2001 US invasion; to Iraq in 2003, again after a US invasion; to Darfur during the genocide; to Lebanon in 2006 and Gaza in 2009, both after Israeli attacks; to Libya in 2011; and to the most devastated country of all – Syria, where, until recently, the Gift of the Givers was the only aid organisation with the courage to operate inside this war-torn country.

Dr Sooliman has personally accompanied his teams on nearly every mission, visiting Syria on four occasions at great personal risk. But the closest he has come to death was in 2012, outside his home in Pietermaritzburg, when accosted by a gun-wielding hijacker.

Not to be ignored is the Gift of the Givers’ work in South Africa – conducting relief operations, such as those during the 2008 xenophobic attacks, and those following a fire that devastated a Khayelitsha informal settlement in 2013; also renovating schools in poor areas; developing a housing scheme in Alexandra township; providing counselling services for disadvantaged communities.

For his remarkable work Dr Sooliman has received numerous awards, nationally and internationally – far too many to list here. Just to mention a presidential award from Pakistan in 2006 following the earthquake there; in 2010 the South African Order of the Baobab, silver award; and in 2014 profiled as one of twenty-
one South African icons. I am told that today’s honorary doctorate is exactly his hundredth award.

In some of his work Dr Sooliman has seen the worst side of humankind, but he continues to be driven by his belief in a common humanity that supersedes class, race and religion. Driven also by a deep sense of compassion – ‘you want to help over and over’, he says, ‘when you see the pain and suffering of others’. But there is, too, a cool temperament – ‘it is impossible not to feel for people’, he goes on to say, but in many dire situations ‘you really cannot afford to sit down and cry’.

A humble person, he acknowledges the role of the many others who have served the Gift of the Givers so selflessly, but he also demands from them professionalism, efficiency, and a readiness to respond swiftly to emergencies. He has a special commitment to Africa, stressing the importance of development, sustainability, nutrition, health, water and sanitation on the continent – and the importance of ending its ‘begging bowl mentality’ – through the work of the Gift of the Givers it has become possible to tell the world that Africa ‘was now giving instead of asking’.

Imtiaz Sooliman must surely be an inspiration for young people in our country, especially with its current simmering race and class tensions – inspiring for his life of selfless service across the world; inspiring for a life that has placed giving at the top of his agenda; inspiring as a role model who has demonstrated by his deeds his own conviction that our shared humanity transcends those affiliations and conflicts that tear us apart.

Mr Chancellor, I have the honour to request you to confer on Imtiaz Sooliman the degree of Doctor of Laws, honoris causa.