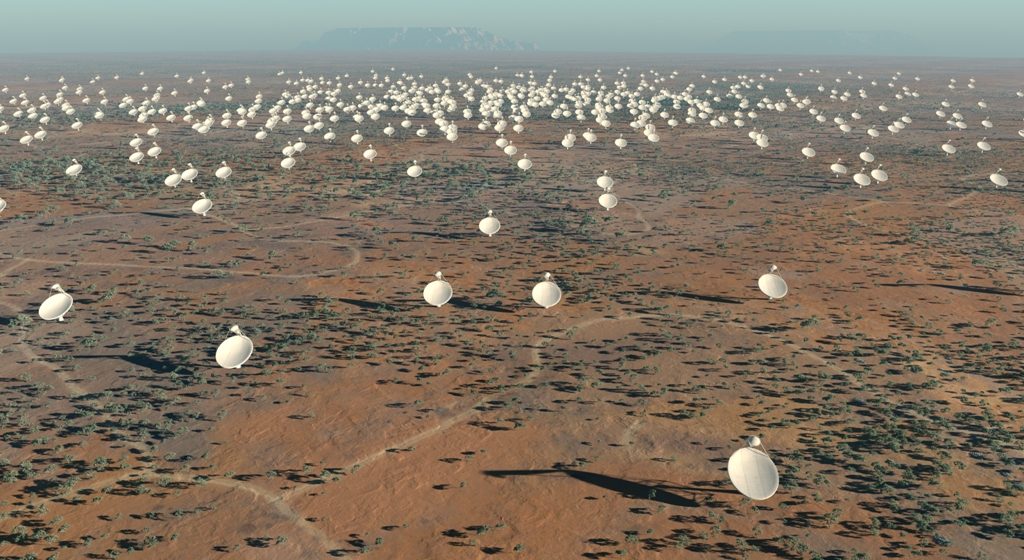 South Africa has put its signature on the international treaty establishing the Square Kilometre Array Observatory (SKAO) as an intergovernmental organisation tasked with building and operating the world’s most powerful radio astronomy telescope.

The Minister of Science and Technology, Mmamoloko Kubayi-Ngubane, signed the Convention Establishing the Square Kilometre Array Observatory on behalf of the South African government in Rome, Italy this week. The signing ceremony was presided over by Italy’s Minister of Education, Marco Bussetti, and witnessed by ministers, ambassadors and other high-level representatives of countries participating in the Square Kilometre Array (SKA) project.

, concluding four years of negotiations by government representatives and international lawyers, and kicking off the legislative process in each of the seven countries.

India and Sweden, who also took part in the multilateral negotiations, now have one year to sign the treaty.  These nine countries will then form the founding members of the new intergovernmental organisation.

The treaty establishes the SKAO as only the second intergovernmental organisation dedicated to astronomy in the world, after the European Southern Observatory, and will ensure strong governance of the SKA project.

“South Africa’s signature on the establishment of the SKAO as an intergovernmental legal entity to oversee the construction and operational phases of the SKA project is a crucial milestone and one which should be celebrated,” Minister Kubayi-Ngubane said.

“What makes this particularly unique is the fact that, for the first time, Africa, Asia, Australasia and Europe have committed at inter-governmental level to collaborate on a large-scale science project as equal partners.  This represents the start of a new era for global science governance,” the Minister said.

The treaty has been named the “Rome Convention” in recognition of Italy’s role in the negotiation process.  It will come into force once it has been ratified by the legislatures of five signatory countries, including all three SKA hosts (South Africa, Australia and the United Kingdom).

“International cooperation in science plays a crucial role in fostering international friendship and solidarity and bolstering commitment to multilateralism, which will assist our world in addressing global challenges like poverty, inequality and climate change.  The signing of the convention puts science diplomacy into practice,” Minister Kubayi-Ngubane said.

“South Africa has delivered on the MeerKAT, a pathfinder to the SKA, and our government looks forward to the next phase of the global initiative to build this extraordinary scientific instrument,” the Minister added.

In 2012, following a nine-year bidding process, South Africa, together with eight African partner countries, and Australia were named as co-hosts of the SKA – one of the most ambitious international scientific projects of our time.

A collection of radio telescopes spread over long distances, the SKA will be built in South Africa and Australia, with later expansion planned for both countries as well other African states.  It will help to close fundamental gaps in our understanding of the universe, enabling astronomers from participating countries to study gravitational waves and test Einstein’s theory of relativity in extreme environments, to investigate the nature of the mysterious fast radio bursts, to map hundreds of millions of galaxies, and to search for signs of life elsewhere in the universe.

The successful construction of the MeerKAT in the Northern Cape, and the ongoing development of the SKA, has enabled South Africa to develop capabilities in areas such as space observation, advanced engineering, supercomputing, big data, machine learning, and disruptive technology platforms, positioning the country to leverage the opportunities presented by the Fourth Industrial Revolution.

Last month, the project reached another milestone when the SKA teams of engineers from South Africa and Australia finalised the critical designs of all components essential for the successful construction of the SKA.  This, coupled with the historic signing of the Rome Convention, moves the participating countries another step closer to making this ambitious global project a reality.

Over 1 000 engineers and scientists in 20 countries have been involved in designing the SKA over the past five years, with new research programmes and educational initiatives and collaborations being created in various countries to train the next generation of space scientists and engineers.

Construction of the first phase of the SKA is expected to start in 2021.  Three prototype dishes are being built as part of the SKA critical design review – the final stage of design work before construction begins.  One of these prototypes is currently being assembled at South Africa’s SKA site in the Northern Cape, which is also home to the 64-dish MeerKAT telescope.