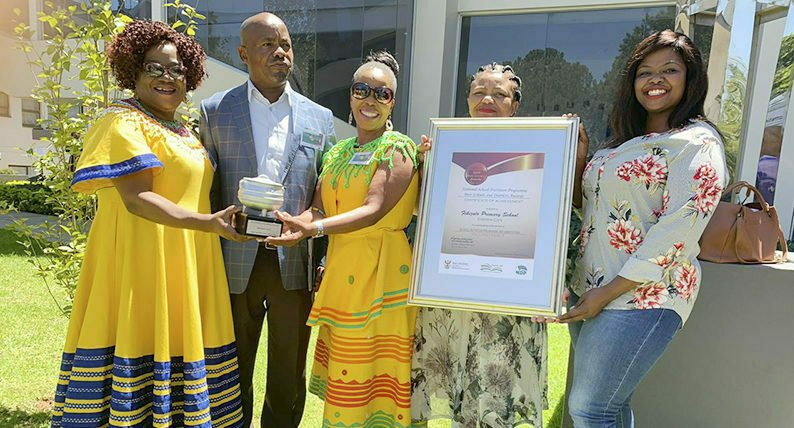 Better attendance, better concentration and better health all round are some of the differences Fikizolo Primary School Principal Zoleka Kate has noticed among her pupils since the national school nutrition programme was rolled out in 2011.

Fikizolo won the provincial round and, proudly representing the Eastern Cape against the other eight provinces at a ceremony in Benoni, Gauteng on 1 March 2019, were awarded second place by Deputy Director General: Social Mobilisation and Support Services, Dr Granville Whittle.

Kate explained that the national programme is run by the Education Department.

“We feed the children five days a week,” Kate said. “We have a different menu each day and we follow the guidelines for the programme.”

The school has a garden, where they harvest spinach, cabbages, onions and carrots to supplement what they buy for the kitchen.

“We don’t have a proper kitchen, but we’ve converted a classroom into a kitchen,” Kate said.

Apart from their record keeping and good food management, hygiene is also judged in the awards.

At Fikizolo, Kate said, the toilets are well looked after and the children wash their hands under running water before they eat: each classroom has a 25-litre container of water in it, with a tap and a bucket underneath.

“This needs teamwork,” Kate said. “The educators, the food handlers – everyone is involved in making sure the programme is running smoothly. I wish to thank my staff and the entire Fikizolo community for their teamwork.”

Kate said they had also received considerable support from the District nutrition office.

Explaining how crucial it is to provide meals for children at school, Kate said, “We do understand the children’s backgrounds. We understand that our children come from poor backgrounds and most are dependent on grants. There’s nothing from home to feed them.”

Prior to the introduction of what Kate agrees is the single-most important and successful intervention of the post-1994 government, there was lots of absenteeism.

“Children came to school on an empty stomach and they couldn’t concentrate,” she said. “Often they had rashes because of poor nutrition.

Now, children are eager to come. “It’s made a huge huge difference to our schools.

“With a child-support grant, a child can’t be sure if their parent will use it to buy meals. But when they come to school, they are sure they will get a meal. It’s making a huge difference.”

Funding is provided on a termly basis.

“The money isn’t there from the first day, but we make means as a school to keep the food programme going. It’s too important.”

If it’s so important to the children during term-time, what happens to them during the school holidays?

“That’s what worries us and we’re talking to the Department of Basic Education about it,” Kate said.

“We do have vulnerable children and we ask the food handlers to keep any left-overs for them. But there’s no certainty about where they will get food during the holidays.”