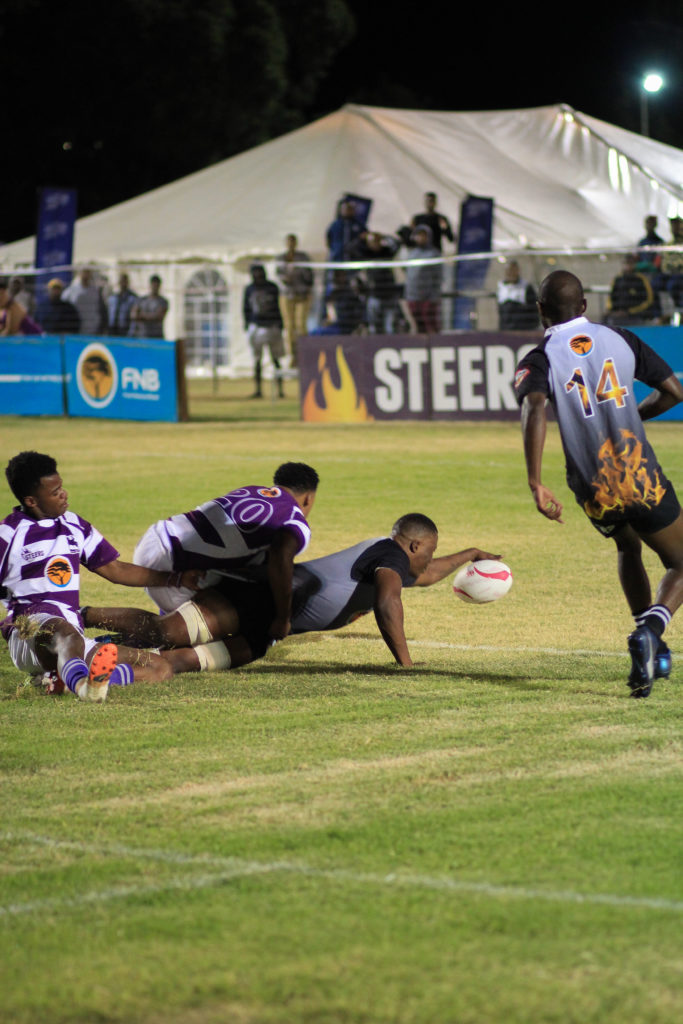 One the Walter Sisulu University (WSU) players bursts through a tackle to reach over the line for a try against Rhodes University. Photo: Mzwanele Sibanda

The FNB Varsity Shield came to Makhanda (Grahamstown) for the first time in 2019, when Rhodes University hosted Walter Sisulu University (WSU) in their first of two home matches of the season. The stage was set on Rhodes’ Great Field for an epic clash between the two rivals on Monday 4 March.

Rhodes put up a great effort against a formidable WSU side. The first half of the game was very intense as nothing separated the two sides going into half time. The Rhodes rugby supporters cheered on the Stallions as they edged nearer and nearer to the WSU try line, however neither team were able to score more than two penalties each in the first half.

Coach Qondani ‘Carlos’ Katywa encouraged the Rhodes team from the sideline and asked the Stallions to continue their brilliant defence at the strategic interval, mid-way through the first half. As each team converted their opportunities arising from penalty infringements, the scoreline read 6-6 as the teams went into the change rooms for halftime.

In the second half, WSU broke the deadlock and continued to break the Rhodes defence. Rhodes made a brilliant defensive effort to keep WSU at bay, however they could not keep their rivals from scoring three tries in seven minutes. Xolani Jacobs, Luvo Mutiwane, and Anathi Shenxane all touched down for the visitors between the 45th and 52nd minute, taking a daunting lead. Rhodes regained their composure on defence, holding WSU out until the last minute of the match, which saw Mihlali Nchukana cross over for the final try, converted by the standout kicker Musanda Xakande. WSU ultimately romped home to a 6-32 victory over the hosts.

Rhodes will now travel to Pretoria to take on the Tshwane University of Technology (TUT) on Monday 11 March, where they will hope to secure only their second win, and remain one place clear of the relegation spot, which is currently held by TUT.