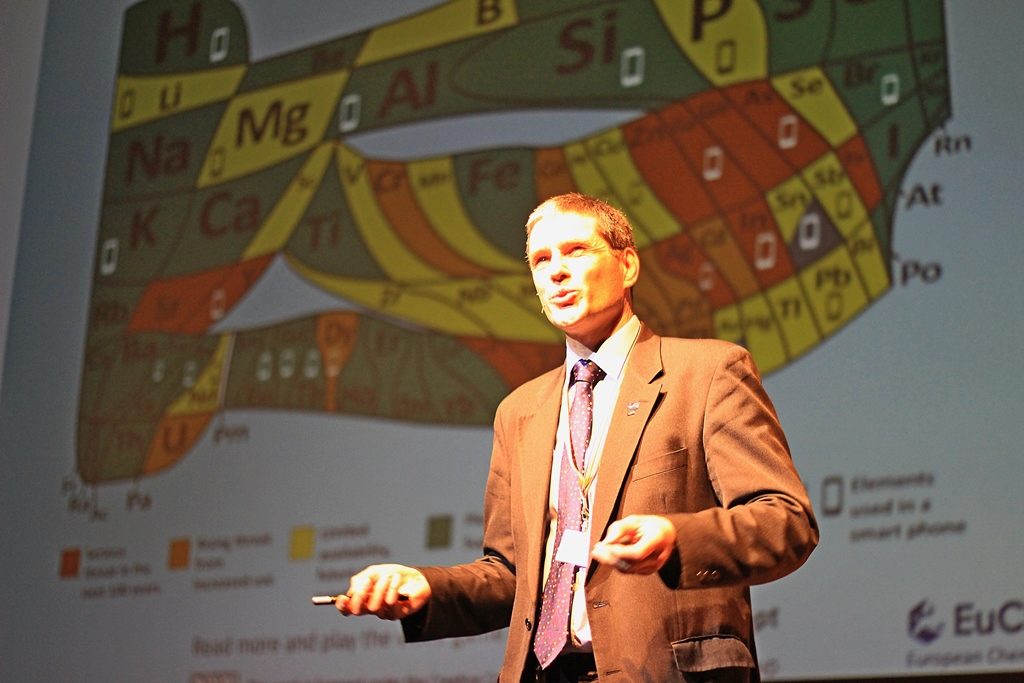 Scifest Africa, with its theme of ‘Discover your element’, started a chemical romance at the opening ceremony of its 23rd edition on Wednesday 6 March. Dr Stephen Ashworth, who has a PhD in chemistry, delivered his lecture entitled: ‘Elementary’: A celebration of the 150th anniversary of Mendeleev’s Periodic Table to set the tone for this year’s Scifest Africa.

Ashworth is a Scifest Africa veteran who has provoked reactions of delighted surprise for many years as he enthralled audiences with his chemical experiments that did not always quite turn out the way people expected.

His usual persona – that of a somewhat nutty professor let loose in a chemical kitchen – was notably absent. Yes, there were some wisecracks and a few groan-worthy puns, but he was much more serious than before.

Ashworth delivered an impeccable lecture about the long road that led up to the development and almost universal acceptance of Mendeleev’s version of the Periodic Table.

He explained that the purpose of the Periodic Table is to arrange all the known elements in a coherent manner. For this reason, early attempts had to rely on characteristics that were known at the time.

If there had been a periodic table in times of antiquity, it would have had only four elements: earth, wind, air and fire. This number increased very slowly until 1809 when there were 47 known elements. Then by 1863 there were 56 elements that English chemist, John Newlands, divided into eleven groups based on their characteristics.

The periodic table we know today was devised by the Russian chemist, Dmitri Mendeleev who arranged the elements according to their atomic mass.

Ashworth explained that several scientists had already come up with a variety of innovative ways of arranging the elements, but what made Mendeleev’s contribution different to all the others is that he left spaces for elements that had not been discovered yet. In other words, he predicted the characteristics of elements that were still to be found.

The theme of the current Scifest Africa is ‘Discover your element’ to commemorate the 150th anniversary of Mendeleev’s Periodic Table. The decision to follow this theme was based on UNESCO’s initiative to raise awareness of chemistry and its applications for sustainable development.

The Year was proclaimed by the United Nations General Assembly and approved by the UNESCO’s General Conference.

It is therefore appropriate that Scifest chose Ashworth to be the curator for the current edition of the country’s premier science festival.

Previous ArticleMy Garden: A tour to Mam’ uNothembile’s garden
Next Article Why walking away isn’t an option