150 water tanks on their way to Makhanda 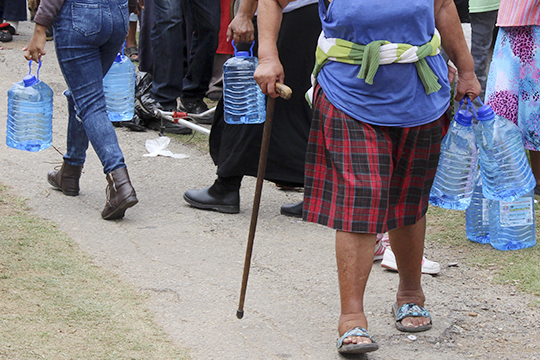 Residents carry water brought by the Gift of the Givers in Albany Road. (13 February 2019 photo by Sue Maclennan)

Eleven trucks filled with bottled water and JoJo tanks were due to leave Cape Town for Makhanda (Grahamstown) an hour ago. ABSA and Engen have sponsored 360 000 litres of  bottled water and 150 JoJo tanks that should arrive in the next few days in Gift of the Givers trucks along with six trucks sponsored by DHL. This comes as efforts to restore the city’s water supply have been hampered by the ongoing strike in Makana Municipality.

Residents served by the James Kleynhans Water Treatment Works have reported that the supply returned intermittently during the weekend, and Makana’s Communications division says most of the maintenance work at the treatment works serving east Makhanda has been completed.

Of the 10 megalitres a day normally supplied by James Klenynhans, 7ML was currently being produced, Makana said. However, some high-lying areas were still without water.

Explaining this, the municipality said in order for there to be enough pressure to get water to high lying areas including Miles Street and Oatlands North during the day,

the flow from the reservoir must be reduced during the evening. This had not been done.

“In the past, the Botha’s Hill reservoir was closed at 9pm and opened at 5.30am,” Makana said,

Because municipal workers were still on strike, however, this had not been carried out.

“The Municipal Manager is trying his best to resolve labour issues that the municipality is faced with,” Makana said. “Water will [become]available [to those areas]during the course of the day.

“Corporate managers from ABSA and Engen will hand over 360 000 litres of  bottled water and 150 JoJo tanks, sponsored respectively by these companies,” Dr Sooliman said. “DHL have sponsored six trucks to accompany five Gift of the Givers trucks to Makhanda, which has been declared a local state of disaster in the Government Gazette 25 February 2019.

“We thank all corporate donors and the public for their generous contributions in assisting Gift of the Givers intervention in  Makhanda. The rescue plan includes drilling a minimum of 20 boreholes to provide several million litres of water per day.”