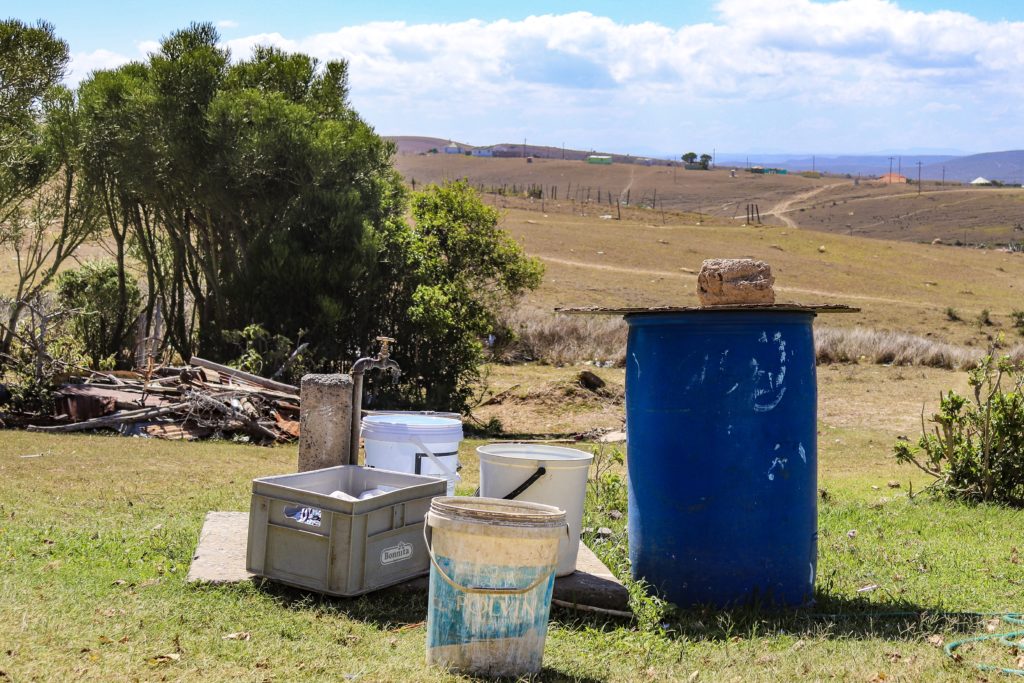 The small town of Hamburg sits between East London and Port Alfred on the R72. About 15 kilometres down a gravel road along the Keiskamma River lies the picturesque Eastern Cape village. Despite the serene beauty of the river and its famous vibrant arts community, Hamburg has been water stressed for over a year. Grocott’s Mail visited the area and dug deeper into the community’s water troubles.

Hamburg falls under Ngqushwa Local Municipality, along with Bhira and Peddie; and forms part of the Amathole District Municipality (ADM). Mid-February Mail & Guardian reported on the water crisis in ADM’s Mbhashe Local Municipality. Late in January, ADM reported that Mbhashe was one of the most threatened areas in the district. Although Hamburg is not part of Mbhashe, some residents told our reporters that they had been without water for almost six months.

Ngqushwa has had dismal levels of rainfall, forcing residents to buy water at exorbitant prices. One source told our team that residents were using wheelbarrows and donkey carts to fill containers with borehole water from other villages. Others had invested in tanks for their home use; one local business, The Hamburg Backpackers, spent upwards of R25 000 just on supply tanks. Ironically, Hamburg had water the weekend our team visited.

“[ADM] is the problem, not so much the water,” said an artist from the Keiskamma Trust, a world-famous art, health, music and education NGO. The source alleged that illegal connections had been made to the main water supply, and infrastructure had been vandalised. On 27 February Amatola Water issued a press release stating that ongoing damage to infrastructure had deprived communities in Ngqushwa of water.

The release states, “A highest point of the attacks is a recent incident where the infrastructure was fixed and the water supply was reconnected – only to be wrecked again 24 hours later. We would like to emphasise that every time these unsavory episodes happen, Amatola Water is forced to divert funds budgeted for other crucial functions, such as improving the utility’s capacity, to restore the water supply.”

“The pipeline feeds reservoirs to enable these municipalities to distribute water to the households. It becomes difficult to fill up the reservoirs when people connect to the pipeline illegally and this deprives other communities of water. We would like to warn those who have illegally diverted water into their homes that they are depriving other people of a basic human right and that cannot be without consequences.”

The suspected reasons for the vandalism include water for irrigation and livestock. Amatola urged residents to report vandalism and leaks.

Concerning Hamburg, Amatola Water Spokesperson Nosisa Sogayise said, “No challenges have been encountered regarding the Hamburg area. There has been a stable supply of water in the area.” Digging deeper into the issue, Amathole District had a different response.

“Water comes from the Sandile dam [and]is released into the Keiskamma river and pumped out […] at the Craig Head Weir, to the Peddie Water Treatment Works,” Madikizela-Vuso said.

“The boreholes supply the “township” and Ntilini village, while the Peddie Water Treatment works supplies the “town”. Both sources can be redirected to supply the other area, but neither [has]sufficient capacity to supply both areas alone.”

Madikizela-Vuso explained that due to drought, borehole levels had dropped, causing supply challenges to one area and the treatment works was unable to maintain supply to meet the demand for the other. She added that illegal connections and vandalism worsened the situation.

Residents in high-lying areas were most affected, as low-lying reservoirs were often drained.

“Last year the issue was further affected by imposed restriction,” said Madikizela-Vuso. “The restrictions were lifted in December. While this has improved the situation somewhat, the challenge of the high demand remains, which affects supply to most areas, not just Hamburg.”

28 February, a press release from the Department of Water and Sanitation announced that the Deputy Minister of Water and Sanitation, Pamela Tshwete, would be visiting Ngqushwa on 1 March to address water issues. Tshwete will be joined by the Minister of Cooperative Government and Traditional Affairs (Cogta) Dr Zweli Mkhize, representatives from Eastern Cape Provincial Government, the Executive Mayor of Amathole District Municipality, the Mayor of Ngqushwa Local Municipality, Head of Departments, as well as traditional Leaders and local farmers.

Grocott’s Mail is currently attending the meeting and can report that there are illegal water connections in almost all of the 108 villages (66 000 people) in Ngqushwa LM, says Amathole District Municipality who say their role of bulk water supply is 84% carried out. The problem is with managing the supply I.e. the reticulation. In one village everyone has illegal connections – and sometimes that results in the neighbouring hospital being without water. The stock dam in the photo is filled with treated water. The field in the photo is being irrigated with treated water. Illegal connections by “bush plumbers” result in wasted water through leaks.