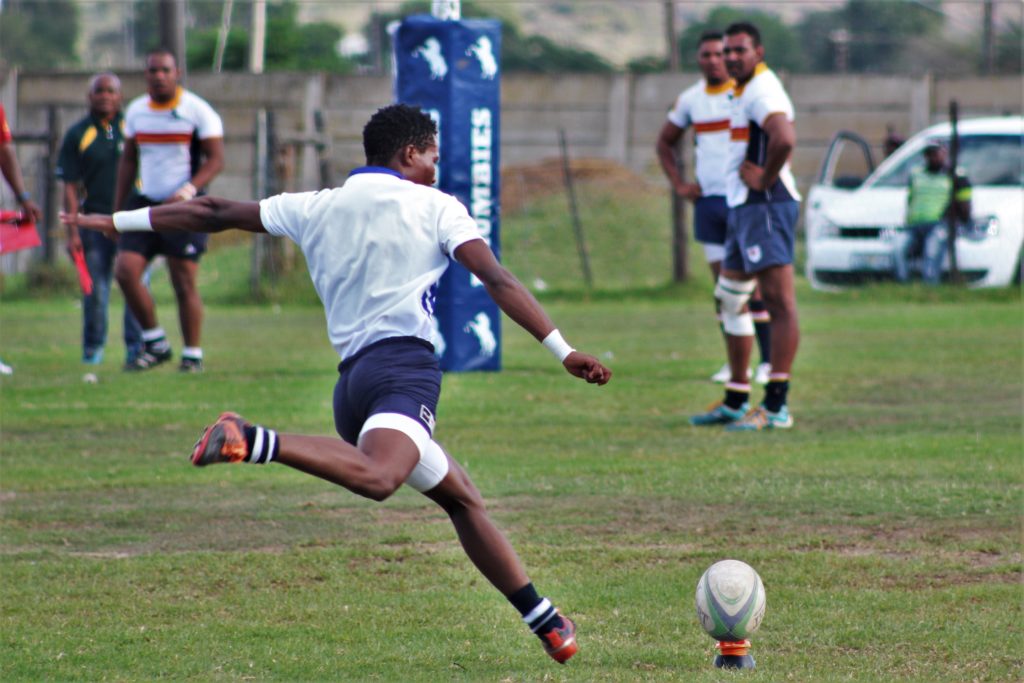 Athule Rooi of Lily White 1st XV attempts to score a penalty for his team during their clash against Brumbies last Saturday. Brumbies won this game 29-13. Photo: Daniel Goldberg

Saturday 16 February saw SEDRU’s annual Mayoral Cup kick off, with six matches in total taking place in Makhanda (Grahamstown) and Alexandria combined. At the Oval in Makhanda, Old Collegians took on Easterns, and Brumbies clashed with Lily White. Both matches were preceded by games between the teams’ First reserves. In Alexandria, Trying Stars and Kowie United and both teams’ First reserves played.

The First Team clashes at The Oval were an even greater display of traditional rugby. Old Collegians vs Easterns resulted in a draw at 16-16. Both teams fought hard and the result was very apt of the game’s nature. Neither team could emerge dominant throughout the game despite both clubs’ best efforts.

The final match of the day, Brumbies versus Lily White, began via two Brumbies tries in the first half. Lily White responded with a try of their own on the stroke of half time to go into the break 10-5 in favour of Brumbies. Brumbies upped the intensity during the second half and dispatched Lily White for a full time score of Brumbies 29-13 Lily White. Brumbies’ victory can mostly give recognition to the discipline and organisation of their backline’s structure, as well as their forwards’ intensity on defence.

The opening weekend of SEDRU’s 2019 Mayoral Cup proved to be successful and showed a lot of promise for the rest of this year’s Mayoral Cup. The next clashes take place on Saturday 23 February. On 23 February, teams will clash in Port Alfred, with Kowie United taking on Klipfontein and Wanderers going up against the Brumbies as well as Easterns versus Swallows at Miki Yili in Makhanda.