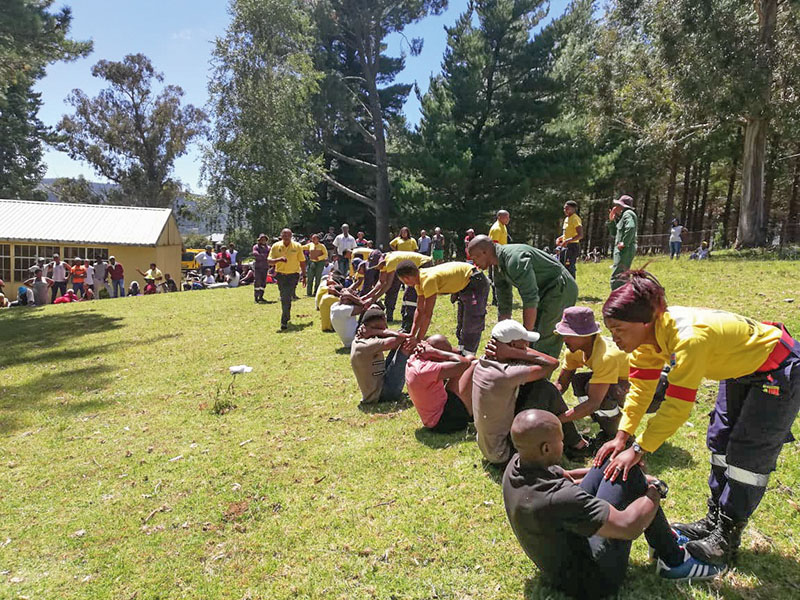 The Department of Environmental Affairs’ Working on Fire (WOF) programme, to help fight veld and forestry fires in the Eastern Cape, is committed to carrying out the government’s mandate of providing job opportunities for unemployed youth in disadvantaged communities.

This month the Eastern Cape province has recruited more than 40 young men and women in eight Working on Fire teams.

Each candidate had to go through fitness testing during the recruitment process and only those who passed were selected.

The WOF fitness tests criteria includes 2.4km run in under 12 minutes for males and 14 minutes for females, 40 push-ups, 40 sit-ups and 8 pull ups for both males and females, in just a minute. Successful candidates left the province on 16 February to undergo training at Nelspruit Training Academy, where specialised veld and forest firefighting training will be facilitated.

These recruits will be taught extensively on the essentials of integrated fire management. This is part of the WOF objectives to develop skills for young men and women in the province.

On the other hand the Ground Operations Manager of the province, Antoinette Jini, said that they are topping up all teams to maintain the team’s strength so that teams can work as a full team in their day to day fire prevention work like fuel load reduction and community awareness.

“We are also getting ready for the up coming winter fire season,” added Jini.

Lundi Public School in Elliot thanked WOF Elliot team after the good initiative that the team did for their learners in the school.

WOF is an expanded public works programme funded by the Department of Environmental Affairs.

Elliot team which is one of the WOF teams that have garden projects in the Eastern Cape, harvested some of their vegetables early this year and decided to donate them to a nearby community and school (Lundi Primary School). The principal of the school, M.O Voyiya, said that the school received heads of cabbage from the Elliot firefighters and appreciated that the team thought about their learners. Adding that the vegetables made a big difference.

“We really acknowledge this endeavor to give a nutritious meal to our needy learners,” explained Voyiya.

The Crew Leader of the team Pumzo Gulwa said that they were very happy to see the impact of their project on their community.

“We also donated to one of the Old Age homes in Elliot area ”, said Gulwa.

He said that they plan to expand and donate to some of the schools and areas that are needy. “One of the Working on Fire objectives is making a difference, so we as Elliot team live according to that value. That’s why we are working hard to make sure that we make a big difference in the lives of people around us,” explained Gulwa.