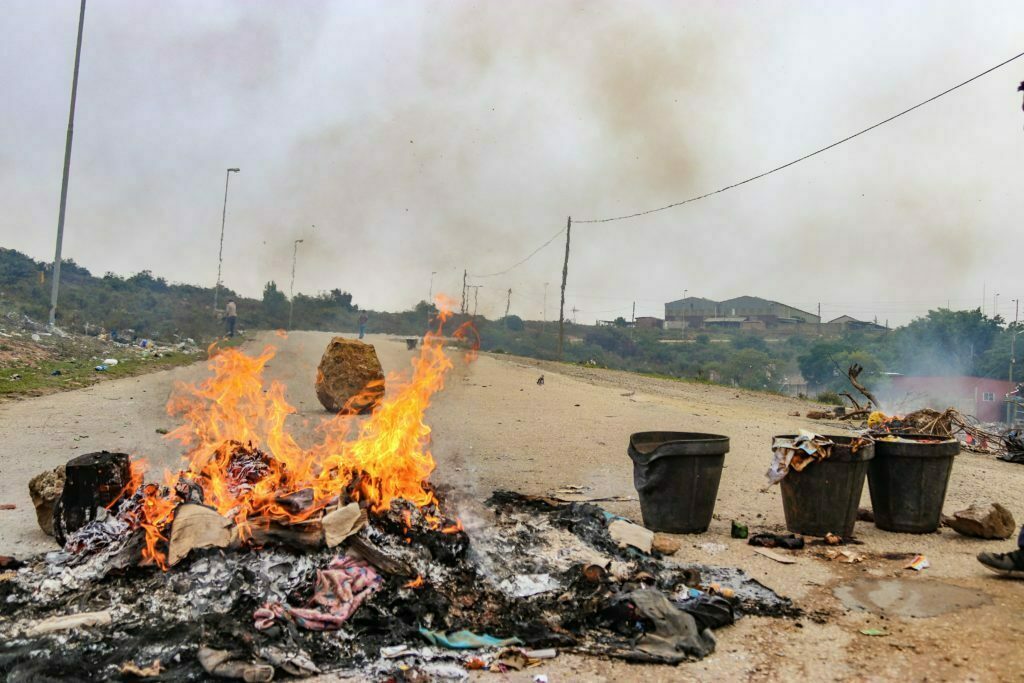 The residents of the Sun City informal settlement took to the streets in protest of a lack of follow-through from the municipality, burning rubbish and their uncollected bucket toilets on Tuesday 12 February. Photo: Stephen Kisbey-Green

Tuesday 12 January the Sun City residents raised the red flag; calling a stop to poor sanitation and service delivery in their community. The road going up to the Electricity Department was barricaded with tires, rocks and burning rubbish, and buckets filled with waste and maggots were set out on display.

Sun City is an informal settlement that sits on top of an old landfill; as a result, Makana is unable to install underground sewer and water lines. Residents are forced to use the bucket system, as well as share one working tap.

Dustin Davies is a resident of Sun City with a family of three children. Davies spoke to our reporters emphasising the horrifying sanitation conditions that residents had been living in for months at a time.

“Today I decided to represent Sun City. We are doing this protest and as you can see it is peaceful, it’s not violent.”, said Davies.

Davies said that the community met with the Executive Mayor and other Directors the end of January to discuss sanitation and water.

Kelello Makgoka, Director of Public Safety and Community Services confirmed this, stating that the meeting addressed water, sanitation and refuse in Sun City.

“The bucket system is overflowing here, that is why you see us here doing this protesting”, said Davies.

Residents stated that the last time their buckets were collected was early January, and that Makana told them that the sanitation truck was broken. Makgoka confirmed that January was the most recent collection.

On Wednesday 13 February, residents continued to protest, but their buckets had been emptied.

As a result of the South African Municipal Workers Union (SAMWU) strike, Makana had to find another service provider to collect the buckets, stated Makgoka. “We are trying our best given the situation,” he said.

Resident Freddie Smith ensured our reporters that the protest was peaceful, but that the community would not stop until Makana addressed them. “There are some other issues in this protest [besides the buckets]”, said Smith, “the taps and the lights, because it’s very dark here.”

Residents were calling for improved sanitation, access to water from communal taps and working street lights.

Makgoka stated that short-term plans for improving conditions in Sun City were to collect buckets once per week; while long-term plans were aimed at moving residents to a more suitable environment.