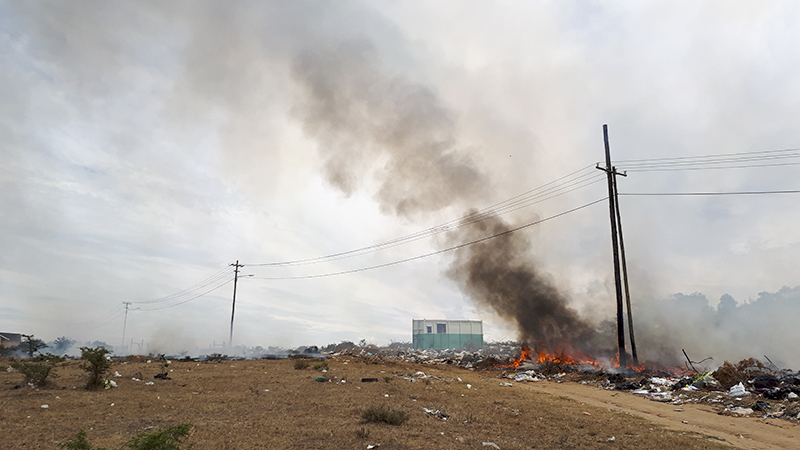 One of three Integrated Waste and Recycling Services buy-back units installed in Makhanda (Grahamstown) in 2016 and photographed during the 7 January protest by Ghost Town residents. It remains unused, IWARS says, because of delayed funding from the Department of Trade and Industry to complete the project. It is the second unit to be vandalised. Photo: Sue Maclennan

As private citizens continue to collect rubbish piling up on the city’s streets during the municipal strike, Makana Municipality is looking into the process of reviving the IWARS recycling programme.

Last month’s protest by Ghost Town residents against illegal dumping on Sugarloaf Hill was an ironic reminder of a stalled project that should by now have massively reduced the amount of rubbish lying around Makhanda (Grahamstown), by making collecting waste more lucrative than dumping it.

Sugarloaf Hill is the site of one of three waste recycling buyback centres placed at high-traffic former dumpsites in Makhanda (Grahamstown). The units were delivered to Joza (next to Makana’s Kop Old Age Home), the Carlisle Street dump and Sugarloaf Hill in February 2016.

Project Manager for Integrated Waste and Recycling Services (IWARS) who owned the units, Mark Price, explained at the time that with solar-powered lights, the specialised, custom-made containers had a fully equipped office area, a suppliers’ area where recycling material was weighed. A dedicated IT system for recording suppliers and sales was being developed and this system would be used at every unit.

The project was viewed as an important component of addressing the problem of waste management in the municipality. By providing easy access to recycling services at locations across the town, waste would be collected rather than discarded.

Two years later, the unit on Sugarloaf Hill is trashed. Unmanned, the windows are broken, the doors long gone and rubbish lies piled up inside – but not for recycling, just dumped. It’s the second unit to go this way.

Price told Grocott’s Mail that the first one had also been vandalised and burnt.

“We took it and sold it for scrap,” Price said. Grocott’s Mail called him after seeing its state during a protest on 7 January 2019. Ironically, the protest was against illegal dumping – the very problem the buy-back centres were supposed to discourage, by allowing collectors to make money out of recyclable waste.

Price said the project hadn’t been able to get up and running because the Department of Trade and Industry had been slow in fulfilling their part of the bargain.

“We can’t go into full production because DTI still owes 45% of the money,” Price said. “In December they sent us a letter confirming they still owe the money, but gave no indication when they would pay the R8.5 million needed to complete the development and set it up over several municipalities.”

He said they had been waiting for the promised capital for 24 months.

IWARS has a contract with the DTI aligned to the Department’s Employment Creation Fund, and a memorandum of understanding with Makana and other municipalities. The total value of the contract is R20 million.

At the time of publishing of Makana Municipality’s Integrated Waste Management Plan, in 2017, IWARS were the lead reclaimers and recyclers in Makana LM.

“The IWARS programme organises people to collect recyclable materials from the landfill sites and transfer stations. Thereafter, waste is separated and transported to main processing sites through a waste transit system that has already been established by the IWARS. IWARS has registered reclaimers in Makana LM as part of the ‘Masihlule Programme’,” the document states.

“At the moment we’re just using the remaining units as storage,” Price told Grocott’s Mail. “None of the units in Grahamstown are operating.”

Spokesperson for the DTI Sidwell Medupe referred Grocott’s Mail’s queries about the matter to Project Manager in the DTI Paseka Maleno. At the time of publishing Grocott’s Mail had not yet been able to reach Maleno at the number provided.

Makana Municipality’s Director of Public Safety and Community Services Kelello Makgoka confirmed that Makana  Municipality had developed a draft Integrated Waste Management Plan (IWMP) incorporating all elements of waste management as per the requirements of The National Environmental Management Waste Act , 59 of 2008.

“Waste reduction, re-use, recycling and recovery is at the centre of the waste management strategy,” Makgoka said. “The role of IWARS automatically forms part of the Plan in the sense that IWARS programmes are linking to waste minimisation strategies.”

Makana Local Municipality was looking  into the process of reviving the IWARS programme.

“Currently the National Department of Environmental Affairs has employed an Environmental Youth Coordinator on behalf of Makana LM to facilitate waste management programs within the Municipal Area,” Makgoka said. “Therefore all waste management activities including IWARS programs will be re-visited as to ensure that they operate within the municipal area  going forward.”