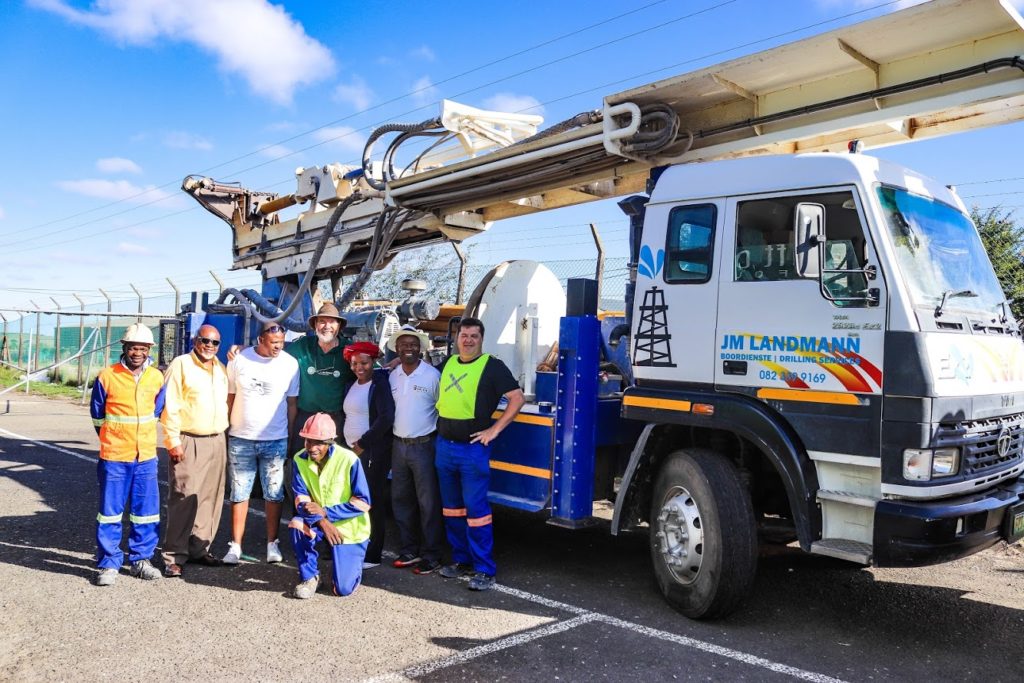 Businesses and NGOs are using their national muscle to urgently collect water for Makhanda (Grahamstown) as unexpected technical problems at both east and west supplies mean the city must drastically and immediately reduce its water use during the next two days. This comes as humanitarian organisation Gift of the Givers announced a successful borehole sunk near Waainek Water Treatment Works, and its teams intensify deliveries of bottled water to areas affected by outages and interrupted supply.

Damaged filters at James Kleynhans water treatment works mean the plant will be operating at half its capacity for the next two weeks and the Howieson’s Poort pump station will be out of operation for two days after a leaking pump flooded the facility. James Kleynhans serves areas mostly in east Makhanda and Howieson’s Poort feeds Waainek which supplies water to areas in the west of the city.

The Waainek supply was expected to be up and running by Monday, the municipality told Grocott’s Mail, again producing 8 megalitres a day. At half-capacity, James Kleynhans would continue to produce 5ML a day. If residents used water sparingly – 25 litres a day per person (or 100 litres for a four-person household) – Waainek could provide water for the two days that the Howieson’s Poort pump station is down,

In a press briefing on Monday 18 February, Makana Executive Mayor Mzukisi Mpahlwa and Gift of the Givers hydrologist Dr Gideon Groenewald confirmed that the search for useable groundwater in Makhanda (Grahamstown) had begun. Groenewald said Gift of the Givers had begun the mapping and exploration process of Makhanda’s existing boreholes that morning, and hoped to strike ‘liquid gold’ by that evening.

Mpahlwa said Makana had a comprehensive plan for the future. When Settlers Dam fell below the level it could be pumped, the west side of town would be switched to the Glen Melville system. He confirmed that James Kleynhans was normally able to supply 10 megalitres a day drawn from the Glen Melville Dam, but that the quality of the water was sub-standard due to ongoing upgrades.

The crisis plan has been that come Day Zero for Makhanda west, all of Makhanda would operate on the Kleynhans system and the supply to west and east would alternate, two days at a time. Mpahlwa said that water trucks would then be dispatched to areas without water for those two days.

Broken filters at James Kleynhans, however, mean this crisis plan is currently unworkable. The facility is currently operating at half its 10-megalitre capacity.

At Monday’s press briefing, Groenewald was hopeful, stating that the plan was to find existing boreholes and “marry them with existing infrastructure”. Once water was sited, it would be tested for yield and chemistry to determine if it would be a sustainable and healthy source for Makhanda. If there was useable water from these boreholes but not connection available to main infrastructure, the borehole would serve as a spring for residents to collect from.

Groenewald emphasised that examining existing boreholes in Makhanda (Grahamstown) and cleaning them properly was a priority. “If you know what you’re doing, Grahamstown sits on some of the best aquifers in the country,” he said.

He said Gift of the Givers could supply Makana with raw bulk water for the Waainek plant. The bulk water would come from boreholes located close to Waainek and would be processed through the plant. Groenwald said the drilling that yielded water at 115 metres at a site less than 500 metres from the treatment works is expected to yield 20 000 litres a day.

He emphasised grave concern for Makana’s drought should March see no sufficient rainfall. By 6.30pm the Gift of the Givers team had drilled a considerable depth into Witteberg Quartzite opposite the Waainek plant. Groenewald said they would continue drilling to a depth of 146 metres and would also explore other sites. This week, Groenewald and the drilling team continued to explore and clean.

Help for people and animals

The town has seen a lot of activity this week, with several local businesses and individual residents hiring contractors to drill boreholes on private premises.

Wednesday 20 February saw  Founder and Chairperson of the Gift of the Givers, Dr Imtiaz Sooliman arrive in Makhanda. He said the organisation had brought in 48 bails of fodder from Howick in KwaZulu-Natal, to distribute to emerging farmers in Makana. “Thousands of animals are dying,” Sooliman said.

Sooliman emphasised the organisation’s immediacy in their response to natural disasters, and said while long-term planning was important, it was essential to act without delay in a crisis. “The question is, ‘What are you doing this afternoon?’, not what are you doing in three years time,” he said. Responding to criticism that bottled water was a short-term solution, Sooliman said, “Bottled water is not ideal, it is true, but under the circumstances, it is the only thing available instantly.”

As the organisation has remained in the area, they have continued to hear about issues facing rural Makana communities like Riebeeck East, as well as other Eastern Cape towns. In response to this, Dr Sooliman said he had contacted President Cyril Ramaphosa for emergency funding to help provide the support that is much needed around the province.

“I don’t think that advisers have briefed the president enough as to to what is actually going on,” said Sooliman.

The exploration of boreholes has continued throughout the week; with Groenewald breaking ground on two sites on municipal-owned land.

In a statement on Thursday 21 February, Makana Municipality warned that James Kleynhans is producing water at half its capacity. The facility normally produces 10 megalitres a day. This was because two of the plant’s four filters needed to be replaced at a cost of R1 million. The Municipal Infrastructure Support Agency had provided this funding but it would take two more weeks before the plant returns to full capacity. Meanwhile, Gift of the Givers would intensify water deliveries in Makhanda East. “The delivery points will be communicated every day,” Makana said.

The pumping of water to the Waainek plant stopped after a broken pump leaked water into the Howieson’s Poort pump station and flooded the facility.

“The equipment at the pump station needs time to dry. The electricians are busy draining the water from the electric equipment. This might take two to three days,” the statement said. The equipment and the pumps would then have to be thoroughly dried before being recommissioned.

Residual water in the lay dams at the Waainek Water Treatment Works is being used to supply water to the western side for the two days it’s expected to take to restore the supply; however, at full use these would quickly become depleted and residents have been urged to use water sparingly: 25 litres a day per person (or 100 litres a day for a four-person household). Grey water should be used for flushing toilets.

Here is a list of organisations that are collecting and/ or distributing water in the town along with the contact people.

Information about the water crisis can be found here: http://www.makana.gov.za/water-crisis/