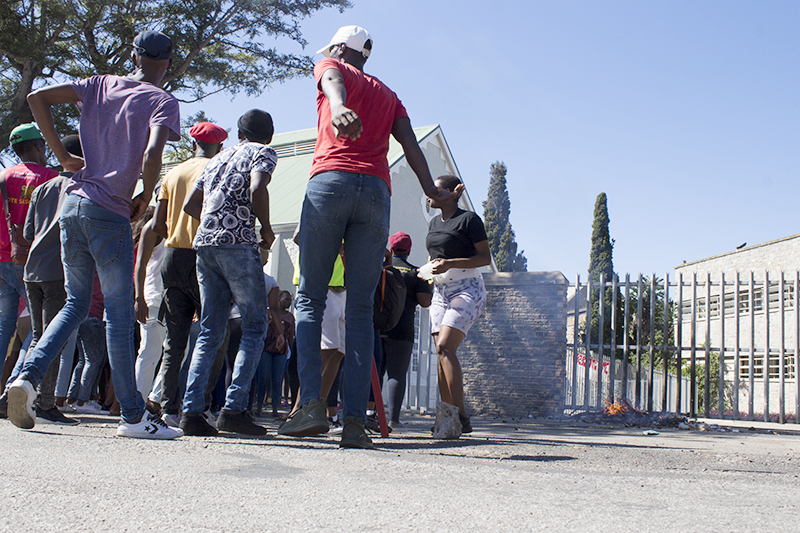 The students’ demands, as listed in a document dated 4 February, include registration anomalies, a lack of transport for late classes, queries about NSFAS funding, the status of the SRC, alleged shortages of textbooks, lecturers, toilets, toilet paper, computers and internet. They demanded that management meet them to hear their grievances and protests continued through Friday and the following Monday.

On Friday, they stopped bakkies with trailers full of rubbish collected by Makana Revive and individual residents during an ongoing strike by municipal union SAMWU, to throw on to a pile of burning material at the gate.

Around midday on Tuesday 12 February, police removed students who were meeting inside the College. “Papers were thrown around and fire alarms and panic buttons were triggered,” Police spokesperson Captain Mali Govender said. With the gates locked, the students burned tyres in the road before proceeding to the City Hall to request the Mayor’s intervention. This followed a meeting facilitated by the Mayor, Mzukisi Mpahlwa, the previous afternoon and attended by the protesting students, and management from the local campus.

Among the resolutions reached at Monday’s meeting were that management assisted by students would look for suitable accommodation in town; the college would engage taxi drivers to provide a service after late classes; wifi would be made available soon and management would address the shortage of textbooks.

The college confirmed that toilets were due to be renovated and the Principal had expressed surprise that they run out of toilet paper, saying this was delivered to the campus weekly.

In addressing allegations that student leadership had been appointed rather than elected, the parties had agreed that the Electoral Commission would be asked to come and run the elections for a student representative council.

On Tuesday they arrived at the City Hall while a press conference was under way inside for the arrival of Gift of the Givers. The charity came to Makhanda with six truckloads to distribute in areas that had been without water for more than a week. Water was given to the EMC students and local residents who were in Church Square at the time.

The protesters said they wanted to meet with College management, who eventually arrived around 6pm, according to Sasco convener Sabelo Madlala, who is a member of an interim student representative structure.

“We went home because we had been waiting for them since 8am and we were tired and hungry,” Madlala said. Madlala, speaking to Grocott’s Mail early Thursday afternoon, said Magxaka and Majali were inside the College and they were outside.

In a statement issued on Wednesday, the College said it was committed to actively engage with protesting students to resolve matters as soon as possible.

“The events of the past week raise deep concerns and the College unequivocally reiterate our condemnation of acts of violence and intimidation,” spokesperson Elmari van der Merwe said.

“On Tuesday 12 February 2019, the EMC SRC commenced visits to all campuses, providing feedback to students in the form of speakers’ notes.  The document contained the resolutions taken at the EMC stakeholders’ meeting which was held on Thursday 7 February and at a Top Management meeting held on Friday 8 February,” Van der Merwe said.

“Answers were provided on various items raised by students which led to the student demonstrations during the week 4-7 February.  Members of EMC EXCO set time apart to travel to Grahamstown to meet the students with the SRC members.  Unfortunately, the Grahamstown students refused to meet with the EXCO and SRC members.”

Grocott’s Mail has not been able to establish from EMC how the College has been affected by the National Health and Allied Workers Union’s  TVET (technical and vocational education and training) and CET (community) colleges strike that began on Wednesday.

Asked earlier this week whether EMC would be affected, Regional Secretary of the union’s Max Madlingozi Region, KK Kaleka, told Grocott’s Mail, “All TVET colleges in the Eastern Cape will be on strike.”

There are 50 colleges across South Africa with more than 264 campuses, and more than 700 000 students according to http://www.tvetcolleges.co.za. Eight colleges are in the Eastern Cape.