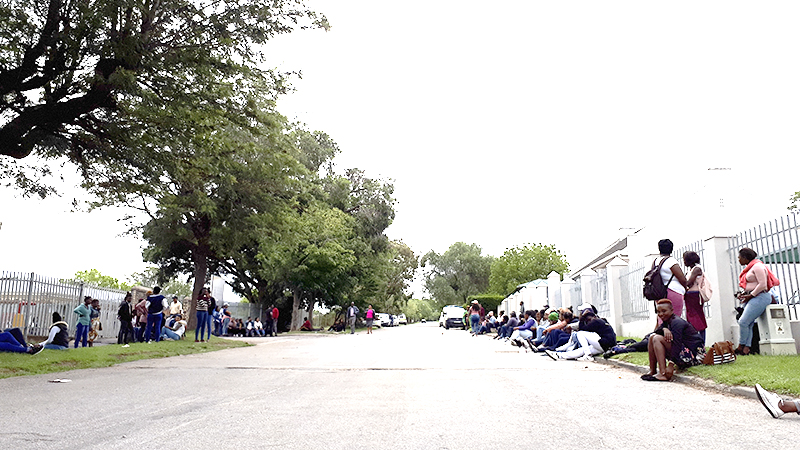 Students at Eastcape Midlands College protested outside the main gate of the Makhanda (Grahamstown) campus for a fourth day today. They denied that agreement had been reached to return to classes and said they were waiting for senior management from the College’s headquarters in Uitenhage, along with the SRC, to meet with them.

The students began protesting on Thursday 7 February over a list of demands that includes registration anomalies, a lack of transport for late classes, queries about NSFAS funding, the status of the SRC, alleged shortages of textbooks, lecturers, toilets, toilet paper, computers and internet.

Facilitated by Makana Mayor Mzukisi Mpahlwa, local College management met Monday 11 February with students in the Council Chamber of the City Hall.
However, while the management was confident learning and teaching would resume today, students speaking on behalf of a cross-party interim representative structure said said that had never been agreed.

Speaking to Grocott’s Mail outside the campus gates this afternoon, where around 60 students sat spread along the sidewalk, Sasco convener Sabelo Madlala and EFF representative Mbasa Mshumpela said, “We did not discuss about going back to classes. There was no agreement to return. They tried to convince us to return to classes but we said we could not make that decision on behalf of the students.”

Madlala said today they’d been expecting a meeting with the College’s exco, along with the SRC, since 8am. It was 3pm when Grocott’s Mail spoke to the students.

Around 30 students, staff and management met with Mpahlwa in the Council Chamber yesterday. Madlala afterwards said the meeting had been successful and agreement had been reached on all issues.

“On accommodation, management assisted by students will look for suitable accommodation in town,” he said. The college had agreed to engage taxi drivers to provide a service after late classes.

Other resolutions and information, Madlala said, included that wifi would be made available soon and management would address the shortage of textbooks.

The college confirmed that toilets were due to be renovated and the Principal had expressed surprise that they run out of toilet paper, saying this was delivered to the campus weekly.

In addressing allegations that student leadership had been appointed rather than elected, the parties had agreed that the Electoral Commission would be asked to come and run the elections for a student representative council.
However, Madlala today emphasised that there had been no agreement to return to classes.

EMC spokesperson Elmari van der Merwe said yesterday, “Members of the Executive Management of Eastcape Midlands TVET College have met with student representatives of the Grahamstown campus [Monday 11 February 2019]. Issues raised by students have been resolved and feedback will be given to all Grahamstown students [Tuesday 12 February] morning. Teaching and learning will continue at the campus [Tuesday].”

Requests for comment from the College and from the leaders of the protesting students on today’s developments had not yet been responded to by the time of publishing.