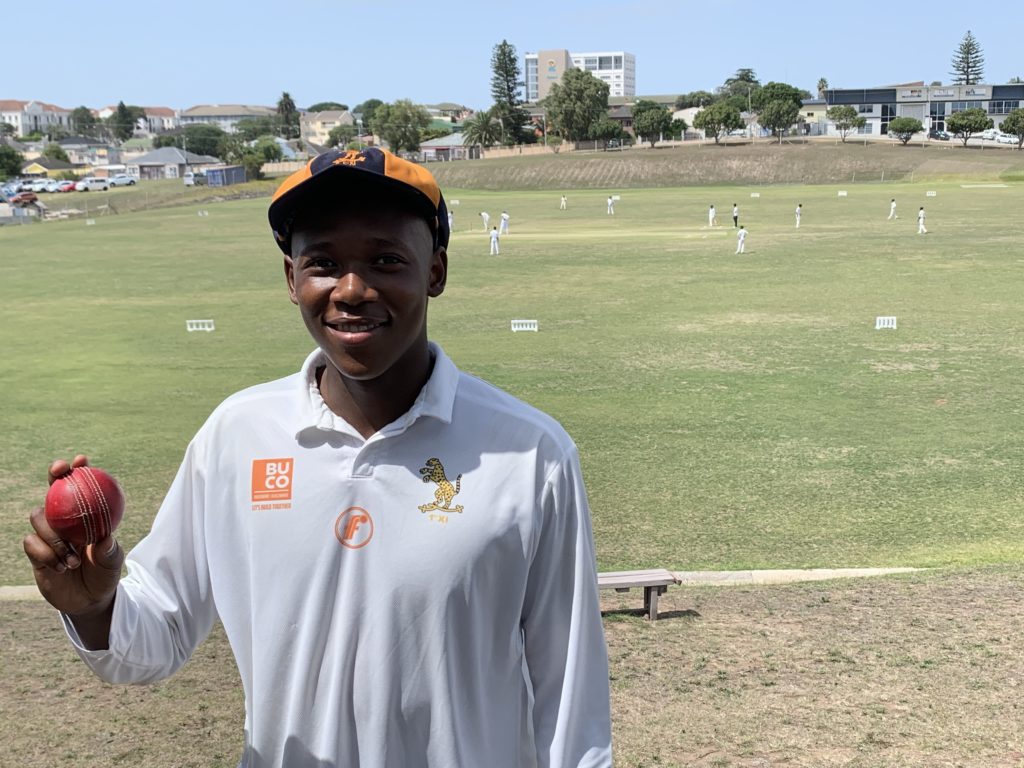 Mihlali Kobese had a phenomenal spell with the ball for Graeme College, taking 6 for 3 against Alex Road. Photo: Supplied
It was a superb weekend for the Graeme College cricket sides. The First team continued on their impressive learning curve, as they had a double fixture over the weekend of 9-10 February. First up was the CSA T20 knock-out game against Muir College in Uitenhage.
Siya Mdlankomo (2/18) set the tone early with a brilliant first over, picking up an early wicket with impressive energy. A combination of youth an experience from Mornay Kohl and Aaron Richardson got Graeme through a tough start, and weathered the storm. Kohl showed how much he is improving with every game, and played a crucial role, along with Richardson. The pair put on a partnership of 108 in 13 overs, before Kohl was dismissed for 37. Graeme lost wickets in the pursuit of quick runs, which included a brilliant cameo by Riaan Labuschagne who scored 36 runs off 21 balls. It was Richardson though who took the game away from Muir. He scored 71 off 45 balls, which included seven sixes and two fours. That propelled Graeme to an impressive 165/ 5 despite their slow start.
In reply, Muir showed great intent as Wonga Hobo took the attack to the Graeme bowlers. He scored 38 off 39 balls, but struggled to find partners to bat with. Despite being ahead of the rate in the powerplay, Graeme managed to keep picking up wickets. The Graeme bowlers managed to keep their cool, and then quality death bowling by Siphesihle Madlongolwana (3/13) meant that Graeme restricted Muir to 100 all out, winning by 65 runs. Aaron Richardson ended a good day with figures of 2 for 27 in 4 overs.

On Saturday, the Graeme First team moved on to Alex Road, where they bowled first this time. Alex were in trouble early, after a tight opening spell from the Graeme bowlers. Lakhanya Sam picked up early wickets (2/7), applying a little pressure on the Alex team. It was young Mihlali Kobese who completey turned the match upside down, however, as he came on as the first change bowler. With swing on offer, Kobese picked up phenomenal figures of 6 wickets for 3 runs, as he ripped through the Alex line-up. Alex were bowled out for just 27 runs. It was Kobese’s first 5-wicket haul for the First side and obviously his best figures so far. With very little pressure on the Graeme batsmen, they managed to pass the score 2 wickets down, winning by 8 wickets.

The U15 A side had a humdinger battle with Alex. Alex scored 64 all out with Connor Pieterse (3/0), Kamva Mancoko (2/5), Lagon Oerson (2/13) and Sivu Sixaba (2/15) all picking up wickets. In reply, Graeme were in all sorts of trouble. Musab Hayat (22*) and Kamva Mancoko got Graeme home with a 38 run partnership, winning by 2 wickets.
Alex won the Second team game comfortably, while the Graeme U14 A side had an equally comfortable win. Onosizo Ntinga picked up 6 for 13, as Alex were bowled out for 53. Graeme won by 4 wickets.
The Graeme Junior side will also be very pleased with four out of five wins against Sunridge on Saturday. There were good wins for U13 B, U11 A, U11 B and U9 A, with the only blemish of the junior sides’ record coming in the U13 A game, which Sunridge won by six wickets.
Previous ArticleGift of the Givers coming with water and expertise
Next Article Kingswood Runners-up at Selborne