Living at the end of the line** 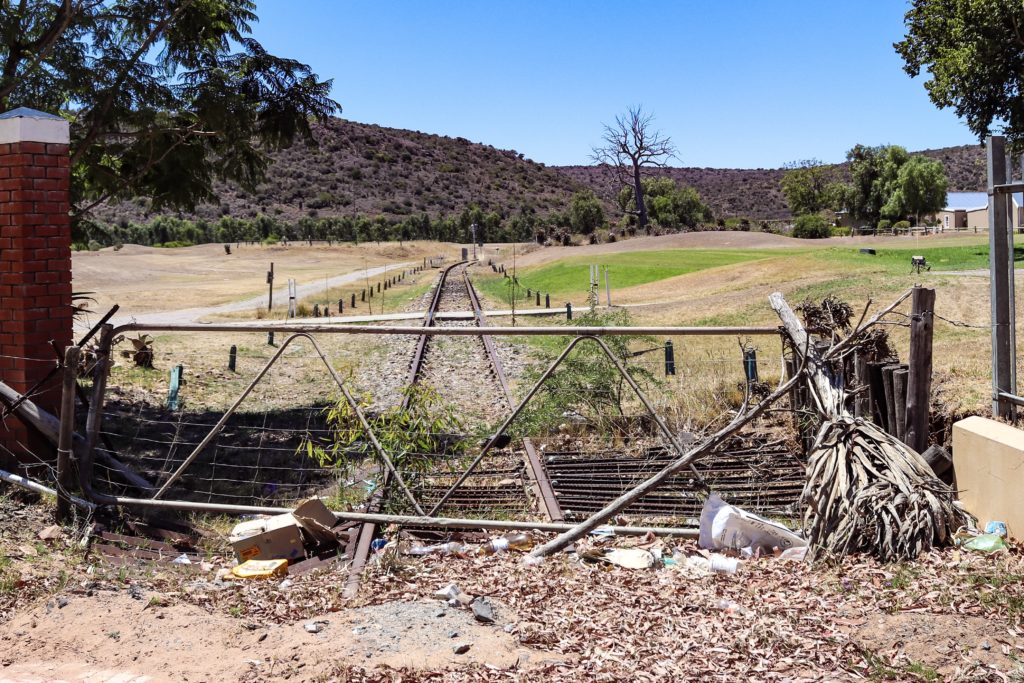 The once thriving railway network that linked Alicedale to Makhanda is now chained up and desolate. Photo: Stephen Kisbey-Green

Eli Konstant and John Bateson manage a quaint bed and breakfast in Alicedale, Eastern Cape. Having lived there since 2006, the couple find comfort in the quiet natural beauty of the small town. Alicedale is home to the Bushman Sands Golf Estate; a top-notch Gary Player course and luxury hotel, pure bliss for the average tourist. But what should be a rural tourism oasis has become a nightmare; filled with unemployment, raw sewage and a gamble gone wrong.

Grocott’s Mail was told about plans for Bushman Sands allegedly involving former investment mogul, Adrian Gardiner. Sunday Times reported in 2003 that Gardiner, owner of Shamwari Game Reserve at the time, made a bet with former MEC for Finance Enoch Godongwana, to turn Alicedale into a “thriving tourist mecca”. But 16 years down the line, Gardiner and Godongwana’s gamble appears to have yielded little result, and with unemployment at a crippling low, residents are fed up.

In 2014, the provincial treasury requested the Hawks to investigate the multimillion Rand deal. That year, Daily Dispatch reported: “Treasury questioned the ECDC (Eastern Cape Development Cooperation) board for flouting corporate governance by not disclosing a probe into how R50 million of public money evaporated into a golf estate.”

Eastern Cape Hawks Spokesperson Anelisa Feni was approached this week for comment on the matter but did not provide a response by the time of publication. Grocott’s Mail is currently investigating further.

“The promises are endless”, said Konstant. “Nothing has materialised.

“For years, our community has been promised houses, proper toilets and so on. And it all came to a head in 2015 when the folks took to the streets. They promised that they were not going to burn anything or break anything, but of course it got out of hand.”

As a result of the 2015 protests, two of three community halls in Alicedale are non-functional. The remaining hall is crumbling and without electricity, but continues to be used frequently.

**Bateson emphasised that for years the condition of the N10 road into Alicedale from Port Elizabeth was abhorrent. Commenting that the road was in such a state that some tour buses refused to use it, taking Alicedale off the map for potential business. The road was later paved and is in decent condition, added Konstant.

The only other road into Alicedale is gravel and seldom graded.

In the past, Alicedale was easily reached by way of the national railway. In the early 2000s, rail lines between Alicedale, Makhanda (Grahamstown) and other nearby towns came to a screeching halt. The loss of the railway system was a major hit to Alicedale’s economy and tourism, and depressing reminders of this happier past are everywhere.

“You know what Ms Eli, I think there’s evil spirits in Alicedale,” said Konstant, recalling a conversation with a community member.

Though our team cannot confirm ‘evil spirits’, the sewage leaks in the town are nothing of good faith. In the KwaNonzwakazi and Transriviere township community; our team viewed two leaks spilling raw sewage down through the veld and road.

The most impressive however, was the overflowing manhole outside the local creche in Transriviere. Just metres away from the brightly coloured sewage, children run and play, curiously peering through the fence as we photographed the stomach-churning water feature.

The leak runs down the hillside into a trench along the road and finally into the Bushmans River. The spill into the river was reported to the Department of Water and Sanitation by Konstant, who said DWS officials visited the site at the beginning of January. Grocott’s Mail confirmed this information.

DWS was approached for comment on the matter but had not provided a response by the time of publication. Grocott’s will continue to report on this issue.

At the end of the (rail) line, Alicedale residents feel the neglect from Makana and other parties. With their dam running low, and tourism and business down to a trickle, frustrated residents wait for a miracle.

“Well why, why is this happening?” pleaded Konstant. “We don’t have jobs, people come, people go, and then we don’t get any rain!

“We have a very high unemployment rate, our alcoholism is getting worse and our youngsters just sit on the side of the road. It’s heartbreaking when there is so much potential!” she said.

Makana councillors who live in Alicedale, Ernest Louw and Theo Bruintjies, were approached for comment. For personal reasons Louw was unable to comment and Bruintjies had not yet responded at the time of publication.

*Cllr Bruintjies later commented to Grocott’s Mail that the water, sewage and service delivery issues in Alicedale were ongoing.

“You are correct that problems lie ahead for the Alicedale community and until the Department of Water Affairs and skilled engineers apply their minds, Day Zero looms into view. The New Years dam is at approximately 20%, and with no boreholes and very few jo-jo tanks the future appears dismal.”

“Little has been done to date, with raw sewerage flowing regularly in the Mandela Park, library, rugby field and crèche areas. Several times the flow of sewerage has reached the Bushmans River violating health and water regulations.

Bruintjies added that the N10 road and gravel link to the N2 are in poor condition. “Apart from the cost of maintenance to the vehicles of the residents, the impact on tourism is serious.”

Bruintjies also stated that unemployment in Alicedale was around 90 percent; echoing the sentiments of Konstant.

*This article was updated on 6 February 2019 to reflect the comments of Bruintjies.

**This article was updated on 7 February 2019 to reflect an error in wording regarding the road to Alicedale from Port Elizabeth.