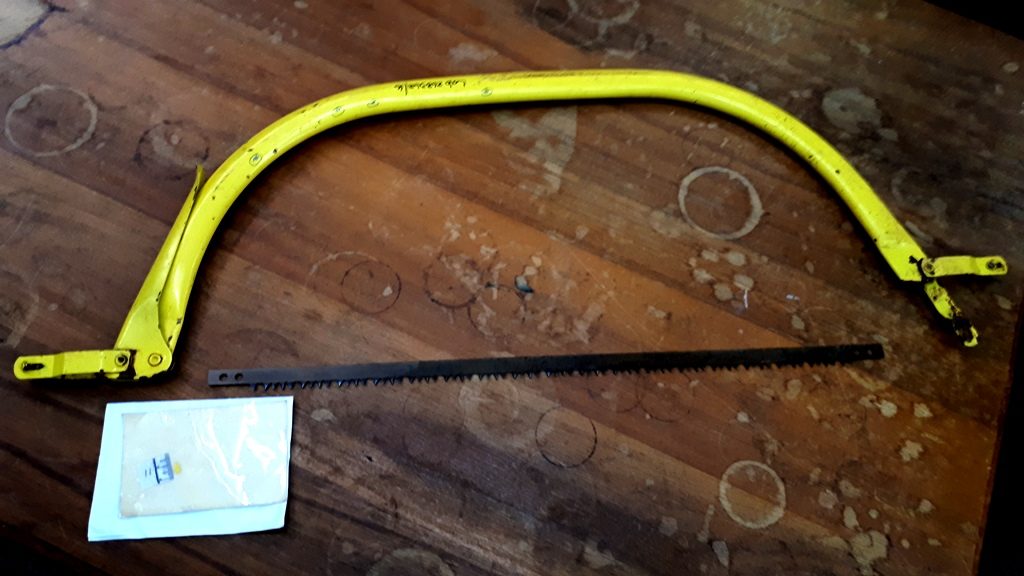 The saw that police found in the Ndlovus' possession at Makana Resort in June 2016 and the chip of paint from the scene of a poaching incident that the prosecution says links it with the men. The saw and the forensic expert appeared in court Monday 28 January. Photo: Sue Maclennan

Both prosecution and defence closed their cases in the Ndlovu rhino-poaching trial in the High Court in Makhanda (Grahamstown) on Wednesday 30 January. This came after two days in which Senior Counsel for the defence, Advocate Terry Price employed the style he is best known for as he cross-questioned Captain Morne Viljoen of the Jeffreys Bay based Endangered Species Unit.

Viljoen had given detailed evidence about the detective work that led to the arrests of Jabulani Ndlovu, Forget Ndlovu and Sikhumbuzo Ndlovu at Makana Resort outside Makhanda in June 2016. They are charged with counts of theft, contravening environmental laws and the medicines control Act, and contravening the Firearms Control Act in 13 poaching incidents near Makhanda, Jansenville, Graaff-Reinet, Cradock and Alexandria.

Price grilled Viljoen about his pocket book entries, as well as those of his SAPS colleagues, the layout of Makana Resort where the men were arrested and Viljoen’s position in relation to the door of the chalet. However, he withdrew his request for an in loco inspection of the site.

Seized from the chalet in the June 2016 arrest were a freshly cut rhino horn along with tranquilliser, a dart gun, a saw and a knife. The men were apprehended as part of the South African Police Service’s Operation Full Moon hours after the killing and removal of the horn of a white rhino at Bucklands Reserve outside Makhanda. The 65 counts in the indictment relate to 22 rhinos poached from October 2013 to June 2016, with a total harvested horn value estimated at R11.1 million.

Price in November contested the admissibility of the evidence, because the investigating officer had not obtained a search warrant. Ruling in the the trial within a trial, Judge Jeremy Pickering determined that the evidence seized at Makana resort in June 2016 was admissible.

The trial resumed on 26 November 2018 with Viljoen giving evidence on the detective work that had led the police to the men. But proceedings stalled again when Price insisted that Viljoen was not qualified to give evidence about the saw found in the men’s possession and a paint chip found at the scene. The prosecution says a fingernail-sized chip of yellow paint found at the site of the June 2016 incident at Bucklands is a direct link between the poaching incident and the saw found in the men’s possession at Makana Resort.

The trial resumed on Monday 28 January 2019 following more than two years of delays and interruptions when the chip of paint this week made its appearance in the in the High Court, along with the saw that it came off and the expert who matched the two.

On Monday 28 January, Lieutenant-Colonel Werdie van Huysteen, forensic paint expert in the scientific analysis section of the SAPS Forensic Science Laboratory in Pretoria, duly appeared in Court A of the High Court complex. With her she brought the yellow saw, and the chip of yellow paint that she’d matched to it.

Price, however, declined to question Van Huysteen and on seeing the evidence, said he had nothing further to add on the matter of the saw. Senior State Advocate Buks Coetzee asked the Judge for permission for Van Huysteen to return to Pretoria and this was granted.

Price this week challenged Viljoen on whether the police had been able to find any evidence of wealth among the three men. VIljoen said Jabulani Ndlovu had made a large deposit of R20 000 to a travel agent.

“You call that a large amount?” Price asked.

“To me it is,” was Viljoen’s reply to one of dozens of brutal challenges to his evidence.

Both Price and Coetzee closed their cases and the trial will resume in the High Court on 18 February 2019 for argument.