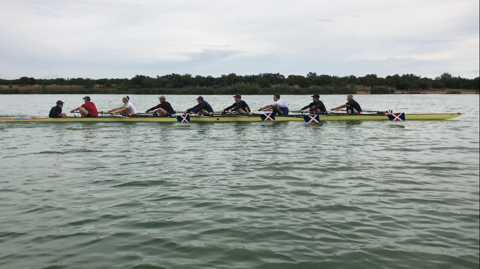 The St Andrew’s College rowing club hosted the first Eastern Cape Regatta of 2019 on Saturday 26 January, with the Settlers Regatta once again being relocated to the Kowie River in Port Alfred.

All the day’s events ran over 450 meters in a knockout racing format, allowing for a large number of races in the day for many of the rowers and, most importantly, some very close racing. The competition was fierce between the Eastern Cape schools and universities.

The U14 age group got a first taste of competition very early in their rowing careers, racing in quads and octuples. The SAC side were undoubtedly left wanting more now that they have seen the standard set by their local rivals and will have another chance to race at the Grey regatta over the weekend of 1-3 February.

The U15 St Andrew’s group had a very successful day, coming away with a close win over Selborne College in the Octuple, and very narrow defeats in the finals of the quads and doubles events that will doubtless provide motivation in the coming weeks.

In Opens and U16 age groups, St Andrew’s rowers came in with a strong set of results. Jason Thomas was the winner of the Beetle Shield in the single scull. Liam Little and Ben Kroon came out top in the Buffalo Shield pairs event in an all St Andrews final. Wins also came in the Warthog Shield doubles event and Men’s B Coxed Fours. The two SAC open eights closed out the other schools opposition on the day to make for a three-boat final in the men’s eights event against Rhodes, the university crew emerging as narrow victors.

In conclusion, a very enjoyable day for all the athletes involved. St Andrew’s attention now turns to the longer format racing and preparation for Buffalo Regatta and the South African Schools championships which begin just over a month from now.