Mpahlwa back in Mayor’s seat 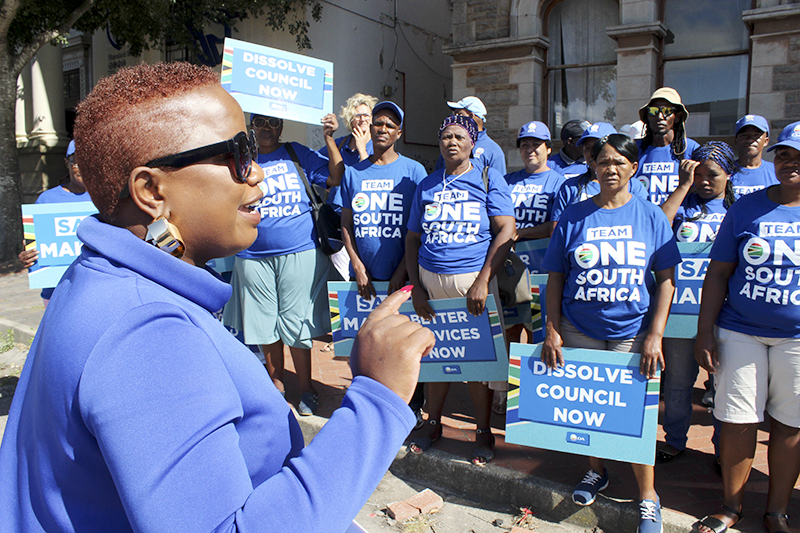 MP Phumzile van Damme leads local DA members in a picket outside the Makana City Hall, as inside, Mzukisi Mpahlwa is voted in as the new Mayor. Photo: Sue Maclennan

Mzukisi Mpahlwa was voted in as Makana Municipality’s Executive Mayor during a special council meeting in the City Hall on Friday 19 January. Outside, Member of Parliament Phumzile van Damme lent muscle to a DA bolstered by MPL and Frontier Constituency Leader Jane Cowley as they visited Makhanda’s (Grahamstown’s) dwindling water supply.

In 1995, Mpahlwa was the first Mayor under the transitional local council and has most recently served as special adviser to Nelson Mandela Municipality Chief Whip Bicks Ndoni. A vote by the 17 ANC councillors and six DA councillors present went on party lines: Mpahlwa received 17 votes and PR councillor Cary Clark received six. No EFF councillor was present.

Mpahlwa’s deployment comes four months ahead of the general election at a time when the ANC is determined to present a unified front and as disillusioned civic groupings find their voice. The post-Council media briefing was hosted by an ANC alliance gathering in a packed Makana Council Chamber. Present were representatives from the ANC’s Youth and Women’s leagues and the Makana Subregion, along with Regional and Provincial Executive members and a strong contingent of the South African Communist Party.

Regional chairperson Scara Njadayi and secretary Jonathan Hobbs flanked Mpahlwa, with SACP District spokesperson Bongani Hanise the fourth member of the platform party. Njadayi said Mpahlwa’s role was to reach out to the community and engage with everyone beyond the political divide. “With our current and historical challenges, the solutions cannot just be political,” he said. Njadayi  emphasised that as a party deployee, Mpahlwa will account directly to the REC via chief whip Luyanda Nase.

In his acceptance speech earlier, Mpahlwa said he was well aware of the daunting task he faced. Some of his immediate challenges include residents of Ghost Town demanding solutions to a range of grievances and residents of Inkanini informal settlement demanding electricity, water and sanitation.

Mpahlwa will be expected to provide leadership as Makhanda’s water supply crisis finally hits home, with experts predicting that by mid-February, the water supply will be half of what Makhanda requires. “Regular supply of clean drinking water must rate at the top of the priorities of our municipality, followed by the dilapidated road infrastructure and the unacceptably high levels of littering,” he said. With rates collection at 76%, he said this needed to improve. “In the same vein, we need to be more transparent in how we use public funds at our disposal.”

Systemic challenges in the structure and operational systems of the municipality, he said, were preventing an efficient and responsive administration.

“I sincerely hope that all the organisations of civil society and all the residents of Makhanda will pull together all their energies behind the drive to revive the fortunes of this municipality,” he said.

In a statement issued at the press briefing, the SACP welcomed the changes in Makana’s political leadership, including the move of Ward 5 councillor Luyanda Nase to the position of Chief Whip.

“Local civil society and the people in general were at the forefront of bringing about the new political developments in this municipality,” the SACP said. “The municipality leadership should at all times seek to close the gap between the elected councillors and our communities.”

The DA’s Van Damme and Cowley led a picket outside the City Hall ahead of the council meeting.

In a statement afterwards, Van Damme, who is the party’s Team One SA Spokesperson for Corruption  said, “The failing ANC government in the Makana Local Municipality must shoulder the full responsibility for Day Zero approaching the residents of Makhanda. We also attended a Makana Council meeting during which the ANC removed its own Mayor and elected another failing ANC candidate that can only take the Municipality backwards.

“The failing ANC government’s chronic financial mismanagement and corruption has serious consequences on the provision of service delivery to Makana. Residents experience water shortages due to the ANC’s failure in government.”