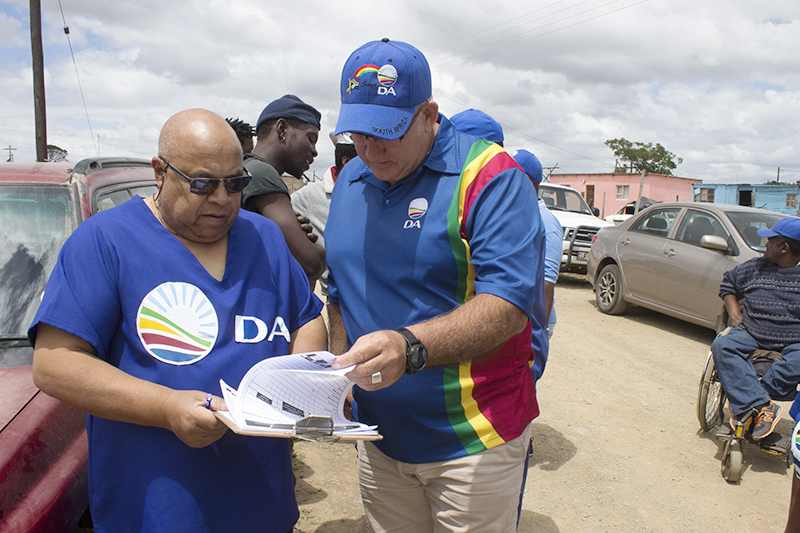 DA Federal Chairperson Athol Trolllip joins local activists in Ethembeni informal settlement in a voter registration drive on Friday 25 January. In Makana Municipality a total of 3049 people participated in the Voter Registration weekend, according to The Electoral Commission in the Eastern Cape. Photo: Sue Maclennan

In Makana Municipality a total of 3049 people participated in the Voter Registration weekend, according to The Electoral Commission in the Eastern Cape.

There were 1014 new registrations. Confirming their same voting district were 424 people and 1611 moved their voting districts, Eastern Cape Electoral Officer Kayakazi Magudumana said in reply to questions from Grocott’s Mail. The IEC was not yet able to provide a breakdown per voting district within the municipality.

The Electoral Commission in the Eastern Cape said it was pleased with the outcome of the past registration weekend.

“Historically Day One registration activity is usually slow and this past weekend has shown this trend to remain with most activities taking place on Sunday afternoon between midday and 4pm,” Eastern Cape Electoral Officer Kayakazi Magudumana said in a statement.

Magudumana provided this summary of statistics in the Eastern Cape:

The Eastern Cape obtained the third highest number of new registrations with Gauteng being the highest followed by KwaZulu-Natal. This was in line with the number of citizens living in those provinces, Magudumana said.

“Once again, we remind those who missed the opportunity to register this past weekend that they are still able to register at the local IEC offices located in all municipalities in the province between 8am and 5pm on weekdays. This opportunity is only available until the proclamation of the election date by the State President: thereafter, registration for the National & Provincial 2019 election stops,” Magudumana said.

In order to register, you will need to be:

No proof of residence is required in order to register.

How do I find my correct voting station?