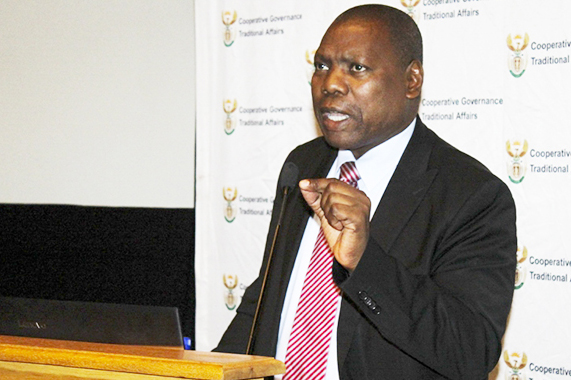 Minister of Co-operative Governance and Traditional Affairs Dr Zweli Mkhize addresses stakeholders, including local businesses and school principals, during an engagement with Makana communities on Friday 4 May at the Monument. Photo: Sue Maclennan

Cooperative Governance and Traditional Affairs (Cogta) Minister Dr Zweli Mkhize has urged parents, traditional leaders and the medical fraternity to work closely to ensure that all avenues are explored in a quest to stem the death of young men at illegal initiation schools.

Mkhize made the remarks in a statement issued by the ministry on Tuesday, a day after a multi-stakeholder consultative meeting in Durban on Monday to discuss and find solutions to the issue.

“It is not acceptable that an important tradition such as this leads to death. A legislation, which is expected to be passed soon, will strengthen the hands of government, the community and traditional leaders to end the killings.

“We need to put a stop to these illegal initiation schools and in the new legislation, traditional leaders will be accountable for the deaths in their areas. It is important that traditional leaders work closely with medical doctors so that deaths can be prevented,” the Minister said.

Mkhize said initiation should not happen without the supervision of traditional leaders and medical doctors, as it is an important practice to build responsible young men. The practice also plays a role in training young men in other important areas of life such as learning to respect women.

Ikosi Mahlangu echoed Mkhize’s sentiments, saying traditional leaders should play a bigger role going forward. He pledged to work together with medical staff to stem the tide of death.

Meanwhile, the meeting hailed the parents who took a traditional surgeon to court, where he was subsequently found guilty of running an illegal school.

Mkhize decried how the authority of traditional leaders was being undermined by mushrooming schools with illegal practices. He said where illegality and criminality are detected, arrests should follow.

“Traditional leaders must be hands on. If there is a death, there must be consequences – either for negligence or misconduct. That is why we have the Department of Justice and the Police as stakeholders so that consequence management is swift,” he said. – SAnews.gov.za