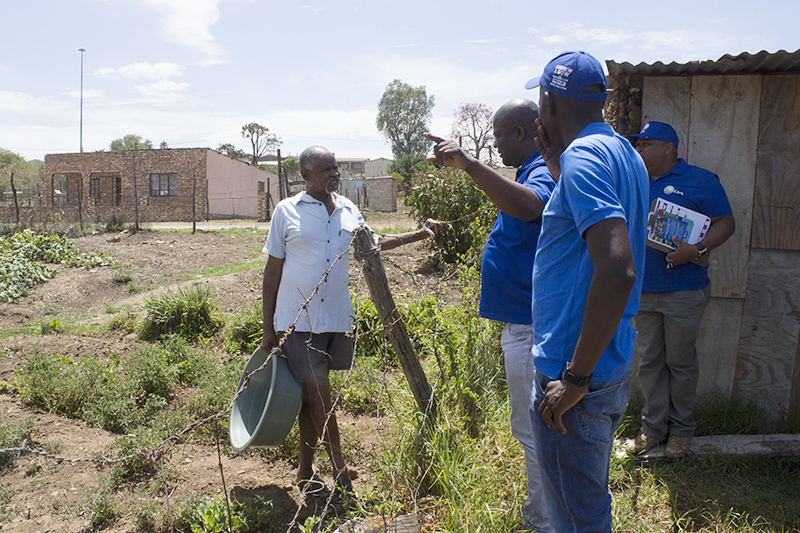 With bucket toilets overflowing in some areas, residents showed them where they were dumping buckets at a nearby site. “The Bill of Rights states that every South African has the right to a safe and healthy environment. These people have been robbed of their dignity,” Bhanga said in a statement after the visit.

Cowley said she would be writing to Co-operative Governance MEC Fikile Xasa to demand action. “The living conditions we witnessed are appalling,” Cowley said. “They pose a massive health risk, as residents are forced to walk through, and live next to raw sewage daily.”

Water and sanitation, for as long as they have been in such a dire state in Makana, have been a strong campaign tool for politicians across the political spectrum.

At an IDP consultative meeting in Tantyi Hall in May 2014 Nomhle Gaga, who was then the portfolio committee chairperson for infrastructure, announced the latest target for eradicating the bucket system in Grahamstown as September 2014. She said water, sanitation and housing were the municipality’s top infrastructure priorities.
“By September we are hoping to eradicate the bucket system in Makana,” Grocott’s Mail reported Gaga saying at the time. She said R38 million had been put aside for the first phase of the project.

In March 2015, then Minister of Water and Sanitation, Nomvula Mokonyane addressed a Water and Sanitation Indaba in the City Hall in Makhanda (Grahamstown). The Indaba, Mokonyane, said at the time, was to take stock of current water and sanitation challenges and interventions, and identify short, medium and long term water and sanitation interventions. Deputy Pam Tshwete, inspected the bucket eradication programme in Makana.