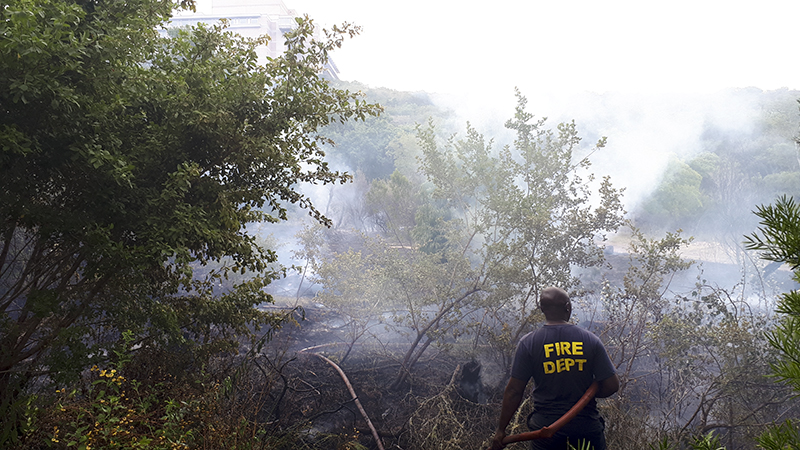 Fire fighters bring under control a fire south of Makana Botanical Gardens on Sunday 20 January. Smoke covering the town Wednesday 23 January had blown all the way from a fire in Summerstrand, Port Elizabeth. Photo: Sue Maclennan

Makana Fire Services Manager William Welkom has confirmed that the smoke that covered parts of Makhanda (Grahamstown) late afternoon Wednesday 23 January was from a large fire at Summerstrand, Port Elizabeth.

Algoa FM reported on the fire on Wednesday in the Noordhoek area of Port Elizabeth, which started around 9pm Tuesday 22 January.

Algoa FM reported that PE fire-fighting teams were keeping an eye on the fire and that initial plans to evacuate the SANCCOB Penguin Rescue Station were put on hold because of a change in wind direction.

Makana Fire Chief William Welkom told Grocott’s Mail this morning, “Yes I can confirm that the smoke visible in our town was due to the fires in PE.”

Makhanda (Grahamstown) residents were concerned when smoke covered the city and then settled on the western horizon around sunset yesterday 23 January. Speculation that it was smoke from the Port Elizabeth fire was confirmed by both the South African Police Service and Makana Fire Services.