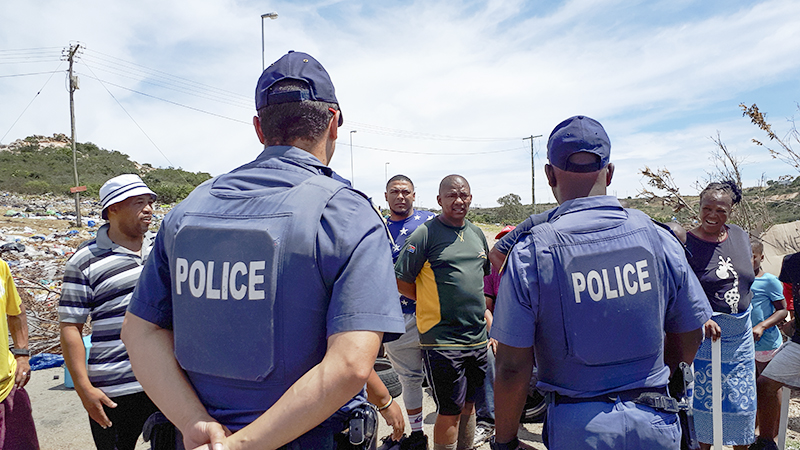 Ghost Town residents on Monday 7 January barricaded the road below Sugarloaf Hill – the route to the Makana Electricity Department, Hooggenoeg and Makana Brick in Makhanda (Grahamstown) – in protest against dumping in the area and because they say they have been neglected by the municipality.

A major clean-up led by the Grahamstown Residents Association, supported by Makana Municipality, local business and the Army, was conducted in May 2015. Dumping in the area quickly resumed, with some residents in the area using it to dump household waste. At the time, they said unreliable collection and not being given black plastic bags were to blame.

Garden services, building contractors and other businesses made matters worse by carting waste to a garden refuse tip there rather than to the municipal landfill. A group of residents in the area successfully campaigned to have the site closed and fenced off; however the dumping by both residents from other areas as well as businesses continued on the open land below the fenced-off area.

This week’s protest was because residents of Ghost Town, below the former garden refuse tip, were furious that the dumping had been allowed to continue and believe Makana Municipality should have intervened to reverse what was by Monday not only a shocking sight in a residential area, but also an obvious health hazard. When Grocott’s Mail arrived, a group of children was rummaging through the dumped waste. “Ons soek speelgoed,” they told our reporter.

The protesters barricaded Trollope Street north of Fitzroy with tyres, plastic crates and garden waste on Monday morning and vowed to remain there until Makana Municipality responded to their demands.

Around 10am, a dozen Public Order Police officers from Port Elizabeth arrived and negotiated with the protesters. Spokesperson for the Ghost Town protesters Weston du Plessis told POP’s Warrant Officer Serfontein that the community had many issues that Makana Municipality needed to address. First and foremost, they wanted the councillor for the area, Mthunzi Fatyi, to tell them how he would address their situation.

“We want a councillor who will care about this community,” Du Plessis told Serfontein. “We want the municipality to co-ordinate programmes to address the drug use that they say is a ‘coloured’ problem. We want coloureds to also be employed at the municipality. We want this rubbish to be cleared from here and for it to stay clean.

“When this mess is cleared up, then we will leave.”

Serfontein said he would bring the councillor to come and address them.

At 10.45am, with no sign yet of Fatyi or anyone else from the municipality, the frustrated residents set fire to some of the piles of rubbish on the hillside. There was panic as the fire quickly took in the tinder-dry conditions, and a wooden power line pole caught fire. As the fire then rushed towards houses next to the site, residents brought out hosepipes, as well as buckets and bottles of water to quench the flames.

Serfontein and the Public Order Police returned with Fatyi as fire engines arrived.

In his discussion with Du Plessis, Fatyi laid the blame for the situation on municipal officials. “You see them sitting behind Shoprite when they are supposed to be working,” the Ward 3 councillor said.

The situation was resolved when front end loaders arrived – one from Makana Brick Chief Executive Colin Meyer and one organised by Makana Acting Community Services Manager William Welkom. They quickly cleared the area.

Meyer then bought black plastic bags and distributed them to residents, who collected loose litter on the east side of Trollope Street. Welkom said the municipality would return with more black bags.

“The front-end loaders can’t work on that side of the road because they will damage water pipes and cables, but the people said they would collect the rubbish if we provided the bags,” he told Grocott’s Mail as the protest headed towards a resolution.

Interviewed at the site, Meyer said while the blockade of the main route to Makana Brick was hurting his business, he understood the residents’ frustration and fully supported them in their protest. “Tomorrow I’ll bring trucks in and we’ll cart all of this away to the dump. By tomorrow I think this problem will be resolved and this site will be clean,” Meyer told Grocott’s Mail on Monday.

WHAT ABOUT THE RECYCLING PROJECT?

Sugarloaf Hill is the site of one of three waste recycling buyback centres placed at high-traffic former dumpsites in Makhanda (Grahamstown). The units were delivered to Joza (next to Makana’s Kop Old Age Home), the Carlisle Street dump and Sugarloaf Hill in February 2016.

Project Manager for Integrated Waste and Recycling Services (IWARS) who owned the units, Mark Price, explained at the time that with solar-powered lights, the specialised, custom-made containers had a fully equipped office area, a suppliers’ area where recycling material was weighed. A dedicated IT system for recording suppliers and sales was being developed and this system would be used at every unit.

The project was viewed as an important component of addressing the problem of waste management in the municipality. By providing easy access to recycling services at locations across the town, waste would be collected rather than discarded.

Two years later, the unit on Sugarloaf Hill is trashed. Unmanned, the windows are broken, the doors long gone and rubbish lies piled up inside – but not for recycling, just dumped. It’s the second unit to go this way.

Price this week told Grocott’s Mail that the first one had also been vandalised and burnt.

“We took it and sold it for scrap,” Price said.

Price said the project hadn’t been able to get up and running because the Department of Trade and Industry had been slow in fulfilling their part of the bargain.

“We can’t go into full production because DTI still owes 45% of the money,” Price said. “In December they sent us a letter confirming they still owe the money, but gave no indication when they would pay the R8.5 million needed to complete the development and set it up over several municipalities.”

He said they had been waiting for the promised capital for 24 months.

IWARS has a contract with the DTI aligned to the Department’s Employment Creation Fund, and a memorandum of understanding with Makana and other municipalities. The total value of the contract is R20 million.

“At the moment we’re just using the remaining units as storage,” Price told Grocott’s Mail this week. “None of the units in Grahamstown are operating.”

Spokesperson for the DTI Sidwell Medupe referred Grocott’s Mail’s queries about the matter to Project Manager in the DTI Paseka Maleno. At the time of publishing Grocott’s Mail had not yet been able to reach Maleno.

Queries sent to Makana Municipality’s Director of Safety and Community Services Kelello Makgoko had not yet been responded to at the time of publishing.

Previous ArticleReaping what you sow
Next Article Mom, teachers, friends… and a lot of hard work!