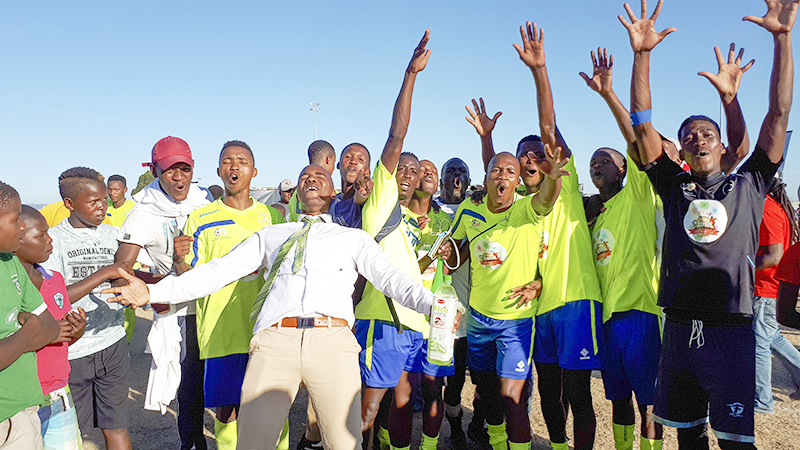 Makhanda recently witnessed the third edition of the New Year’s Cup, which I have been following for the past two years. The 2018 edition started with a low-key launch which included speeches from various sponsors and stake holders which also concluded with the draw. It was very disappointing to notice that the local football association took no part whatsoever in that launch. Certificates were awarded to the recipients of the NYC fund which helped them with sport administration courses.

What seemed so strange was that most of those recipients, if not all of them, did not even know their names: the MC would call out the name and all of them would stand still until somebody pointed at any one of them and it was only then that they would jump forward to collect their certificates. Something just did not seem right and it will be very interesting to see if they will get a chance to show their skills in the same NYC tournament that has equipped them with the skills.

Round robin games were played mostly at the Army base with just a few at Rhodes, which once again made it very difficult for most of the football-loving people to watch the games due to transport problems. Speaking to some of the visiting coaches who were here for the last two editions, they told me that their players wanted to play at JD Dlepu as the atmosphere there was completely different compared to any of the other venues. Makhanda had eight representatives in this year’s edition, but six of them failed to make it past the first round. The biggest casualties were defending champions, Maru.

Sakhulutsha made it to the last 16, but were also knocked out. I think the standard of the 2018 tournament was very high compared to the last two editions and there are a number of things that I attribute to our local teams’ downfall.

Despite an enormous talent that our local boys have, they still lack a lot of experience in game management: how to deal with some critical stages of the game. It is also very easy to see the difference between a well coached player and a player who just relies on natural talent alone.

When Maru won this tournament, they got help from four or five players who were used to playing big tournaments like these and you could easily see the difference they made with the quality they possessed. Grahamstown United won the tournament, but there were only two or three local players in their starting line-up. The rest were players acquired from elsewhere and you could not doubt their quality and experience on the big stage.

Another difference between our local players and the visiting players is that the visitors play against quality opposition week in and week out and are also coached by very good coaches who know exactly what they are doing. For example, Grahamstown United invited a good coach from PE to come and help them – and it paid off. Speaking to him, you could easily see that he is a very good game reader and tactician who plans well ahead of games.

Some of our local teams still suffer from ill discpline. This tournament requires a lot of discipline, as it is played at a crucial time of the year. The refereeing did not match the standard displayed by the teams on the pitch. The officiating has not been up to standard for the past two editions, but for the 2018 edition it was even worse.

It is very rare to hear so many coaches complaining about officiating – even the coach who won the trophy. It is also very rare to see the football-loving crowd at Dlepu being annoyed by poor officiating – but it happened a few times in the 2018 edition and what happened in the final was a disgrace.

Once again, the Addo Academy coach echoed the sentiments of other coaches I had spoken to when he complained about accommodation of his team. He believed the organisers could have done a much better job. He said, “It is very sad to see teams that come to participate in this big tournament being given such accomodation. Organisers need to get their act together.

“Another thing that we are not happy about is that we were fetched at 9.30 from our accommodation for the final that was suppose to start at 3.30 and we were left in the hot sun with no shade. As you can see, the stadium has no shelter. During the game, we were exposed to the hot sun on the benches. I really think that the organisers need to value the participants the same way they value their VIPs and referees,” said Kleinbooi.

My best moment of the tournament was when Manyora decided to entertain a packed Dlepu stadium with some kasi flavour and got a standing ovation from the appreciative crowd. My worst moment was witnessing bad officiating in the final after both teams tried their best to play the best football to entertain a huge crowd that filled Dlepu to the rafters. The officiating overshadowed the good football that was played on the day.

This was the third edition of the NYC, but I still have not seen how the hosting of this tournament helps our local football. The LFA plays no significant part in this tournament except greeting players before the start of the games. Makana LFA executive member Akona Heshu admitted when I interviewed him that they don’t play any role in this event.

That is so strange considering that they are the custodians of football in Makhanda, the host town of this tournament. It is a well known secret that the LFA has no sponsors for the league and premier league teams are made to compete for less than R3 000 in it. The stadium that hosts the final of the NYC is in a very bad state with no change rooms, toilets or water. The fans are made to sit on hard cement and there is no shelter to protect them from the hot sun and rain.

When I asked the Mayor, Nomhle Gaga, about the state of Dlepu at the launch, she said, “This tournament is played in stadiums exactly like Dlepu and we cannot fix things that are being vandalised by the community. The community needs to play its part in making sure that people do not vandalise the stadium. I can not really tell you when the stadium will be fixed, as we have just built a multipurpose centre at Foley’s Ground,” said Gaga.

I think this is where the hosting of this great tournament should benefit the local football: by assisting the LFA, or donating something so that the local teams compete for decent prizes. Most of all, to assist them with the renovation of change rooms and toilets that will also benefit the visiting teams – our municipality seems to have no solution for the deteriorating state of our only football stadium.

One of the local coaches and former footballer, Thozamile “Bashin” Yaka, said “I don’t know why high-profile officials like Danny Jordaan keep on coming to Makhanda when they are doing absolutely nothing to help the state of our football. He comes to this stadium every year and turns a blind eye to the condition of the stadium when he could even use his own money or connections to fix the stadium.”

Lastly it will still be very interesting to see how this NYC benefits local football, players, coaches, referees and administrators. So far the only thing that local football lovers can be happy about is that the trophy remains here at home. Fans are already looking forward to the 2019 edition.

Previous Article‘Believe in yourself, no matter what’
Next Article Tourists, queues and elephants