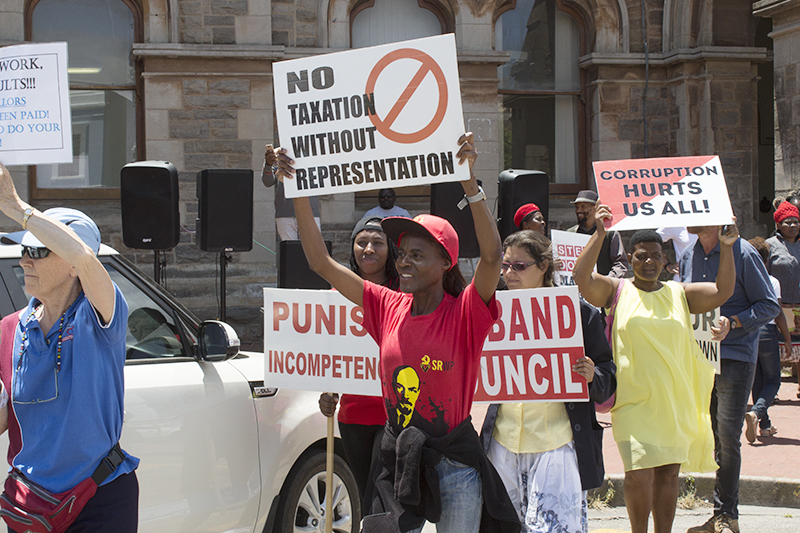 Protesters stage a vigil outside the Makhanda (Grahamstown) City Hall on Wednesday 19 December, renewing the call for the dissolution of the Makana Council. Photos: Sue Maclennan

Two dozen activists gathered in an hour-long vigil outside the Makhanda (Grahamstown) City Hall on Wednesday 19 December, renewing their call for the Makana Council to be dissolved. The protesters were among the hundreds who marched to the City Hall last month with a petition of more than 21 000 signatures calling for the Province to place Makana Municipality under Section 139(1)(c) administration.

The event proceeded two days after the ANC’s Regional Executive Committee announced a reshuffle of its executive, including the resignation of the Mayor, Nomhle Gaga, and the deployment of political scientists and government adviser Mzukisi Mpahlwa to the position.

Protest leaders, the Unemployed People’s Movement’s Ayanda Kota and Grahamstown Residents Association chairperson Philip Machanick rejected the reshuffle, suggesting it was an insult to the residents who had called for the Council to be dissolved.

“Once they have failed to execute their mandate, they should be subjected to recall,” Kota said in his address. “We call that democracy.

In a brief interview afterwards, Machanick afterwards said the action was to insist on the community’s right to be consulted and involved in decisions affecting them.

“Province was presented with a massive petition calling for Council to be dissolved and Makana to be put under administration. Organisers inform me that they have not had a formal response; in a constitutional order that requires citizen participation, this is not acceptable,” Machanick said.

In their statement on the deployment of Mpahlwa as Mayor, the ANC’s REC said they saw the call for dissolution as a direct assault on the democratically elected party’s right and ability to govern.

Ron Weissenberg, a driving force behind citizen and business funded Makana Revive and a leader in the campaign for litigation to dissolve the Council, said a court application was in process, delayed by the festive season.

“The reshuffling of the deckchairs on our sinking Council ship (mayor/chief whip etc) will probably enhance the application for Section 139,” Weissenberg said.

The exit of Municipal Manager Moppo Mene from the City Hall to get into his parked car midway through the protest caused a stir, with Weissenberg requesting him to delay taking his lunch hour to address the crowd.

“He asked, what should he tell them,” Weissenberg related afterwards. “I requested that he should phone his political masters and request from them the dissolution  of the Council.

“He responded that he was not authorised to do so. My response was that I was on behalf of the community authorising him. He asked who I was and drove away.”

Mene has been meeting with taxi organisations BATA and Uncedo regarding conflict over the lucrative Extension 10 route that has seen blockades since Friday 14 December and closed the Queen Street rank. The rank is owned by Makana Municipality. He had not replied to a request for comment on the protest and his interaction with Weissenberg at the time of publishing. 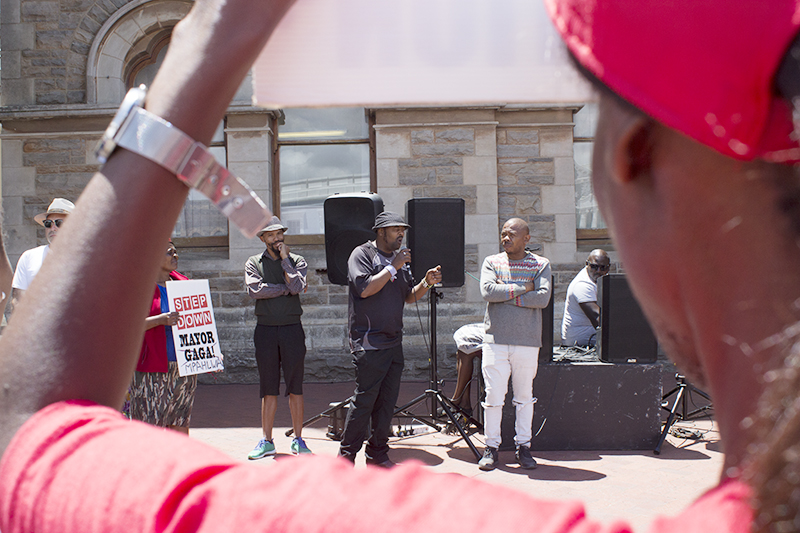 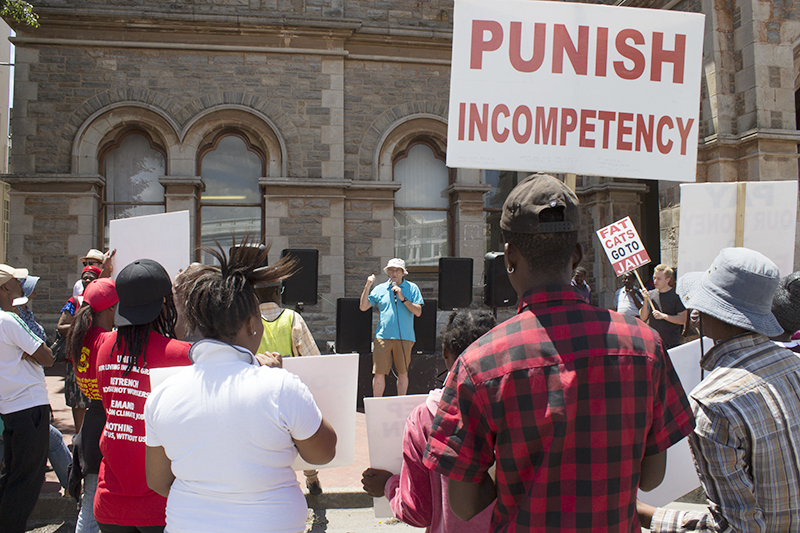 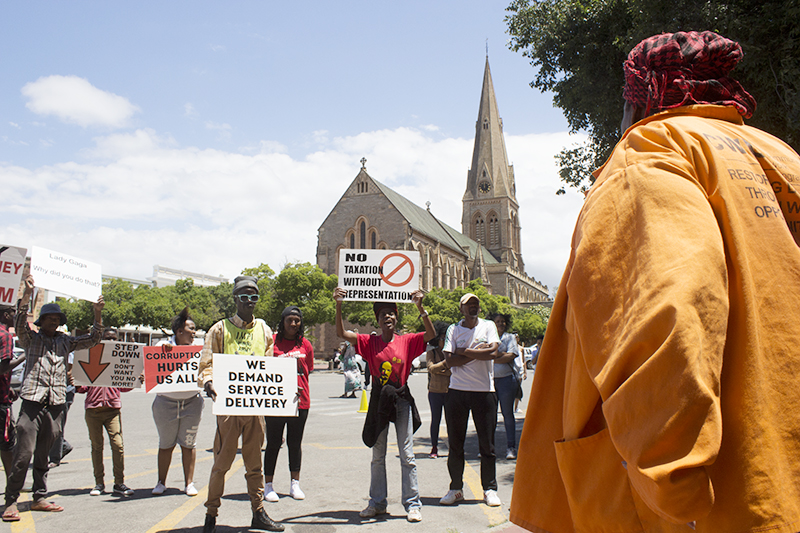 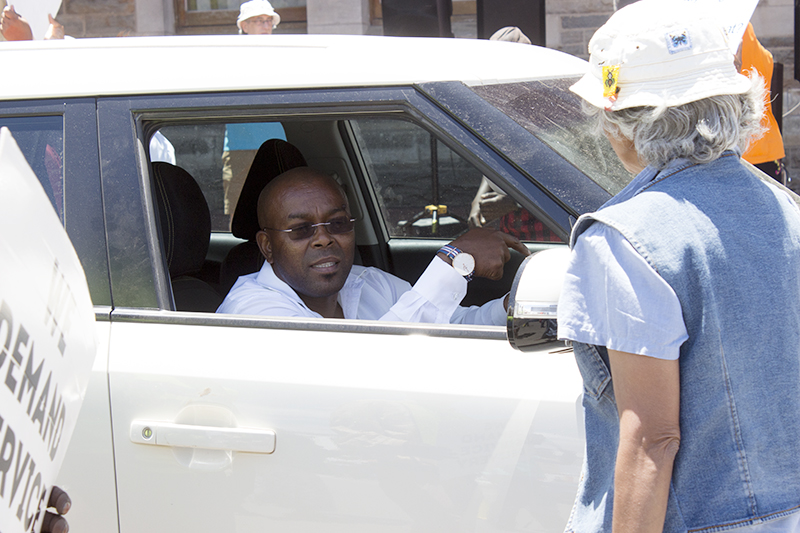 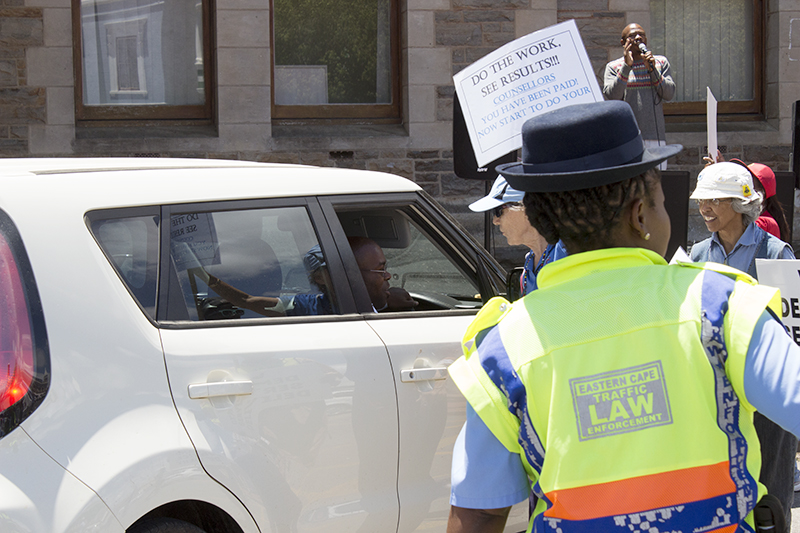 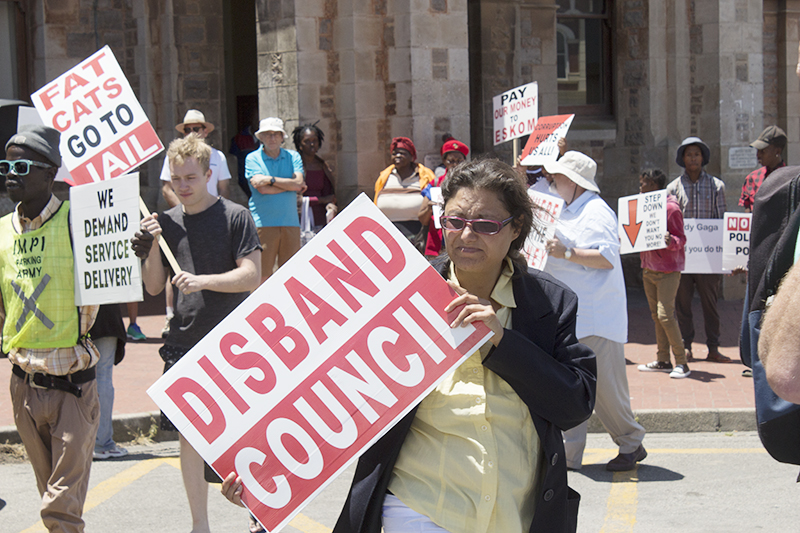 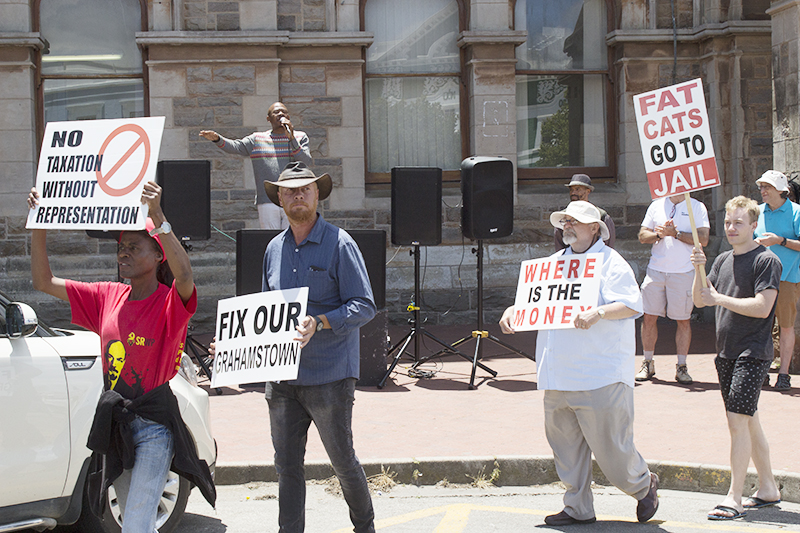 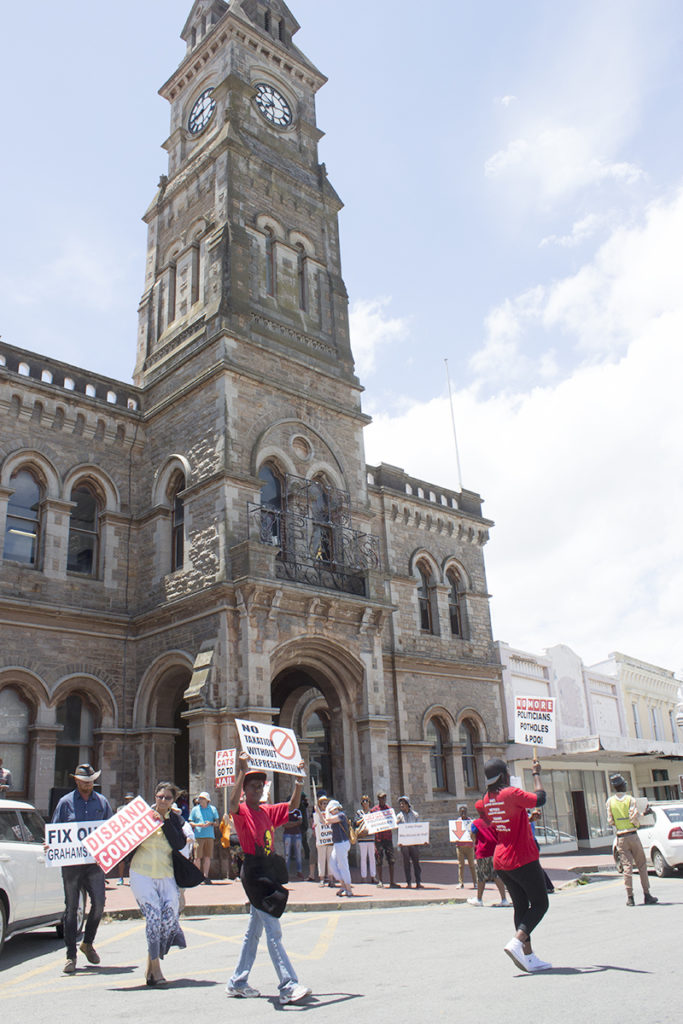 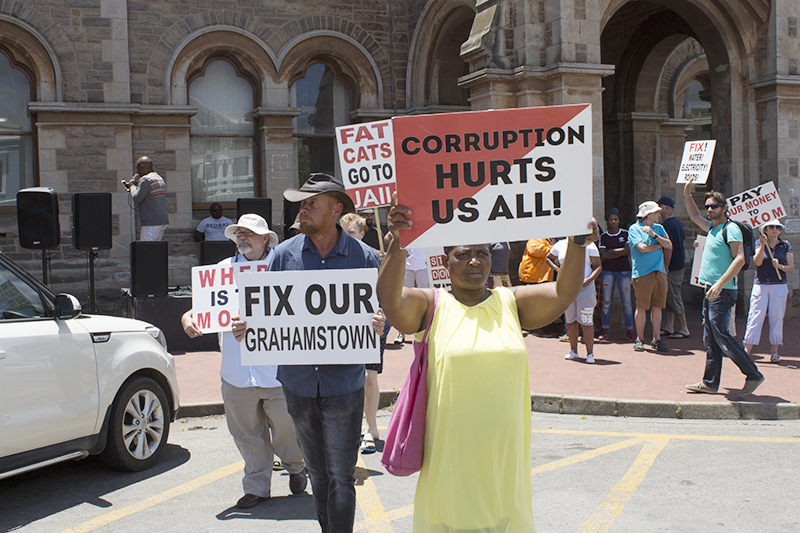 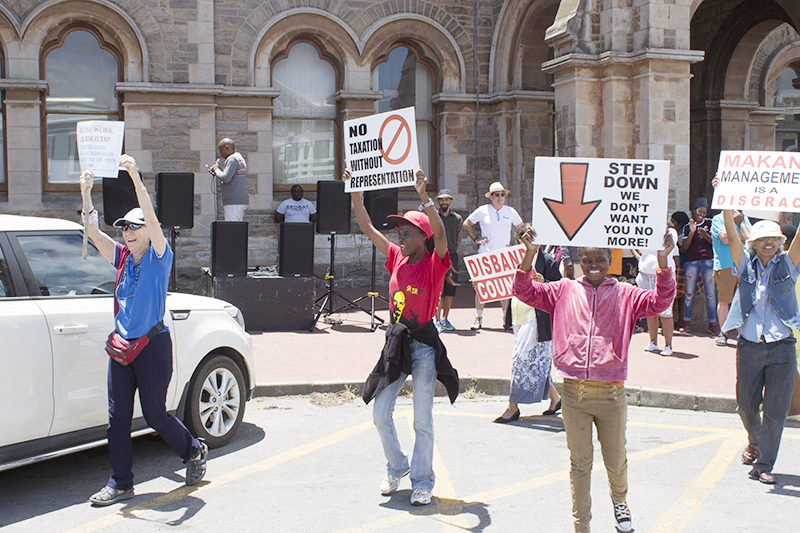 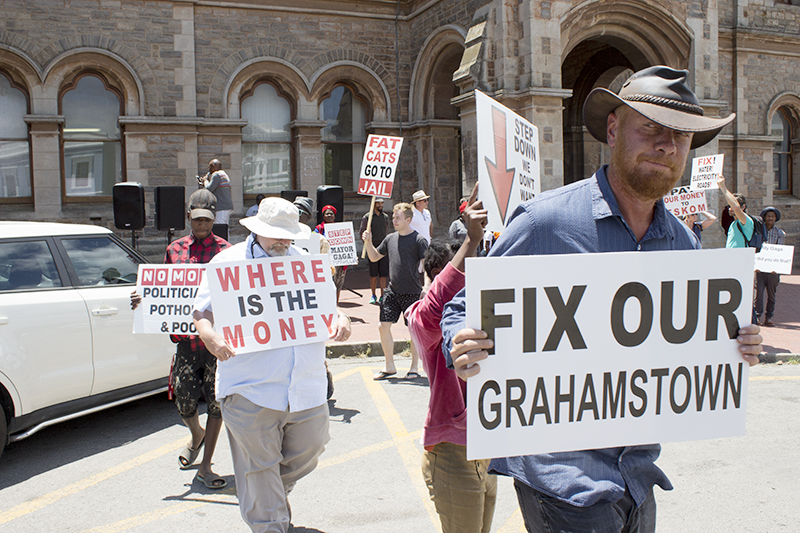 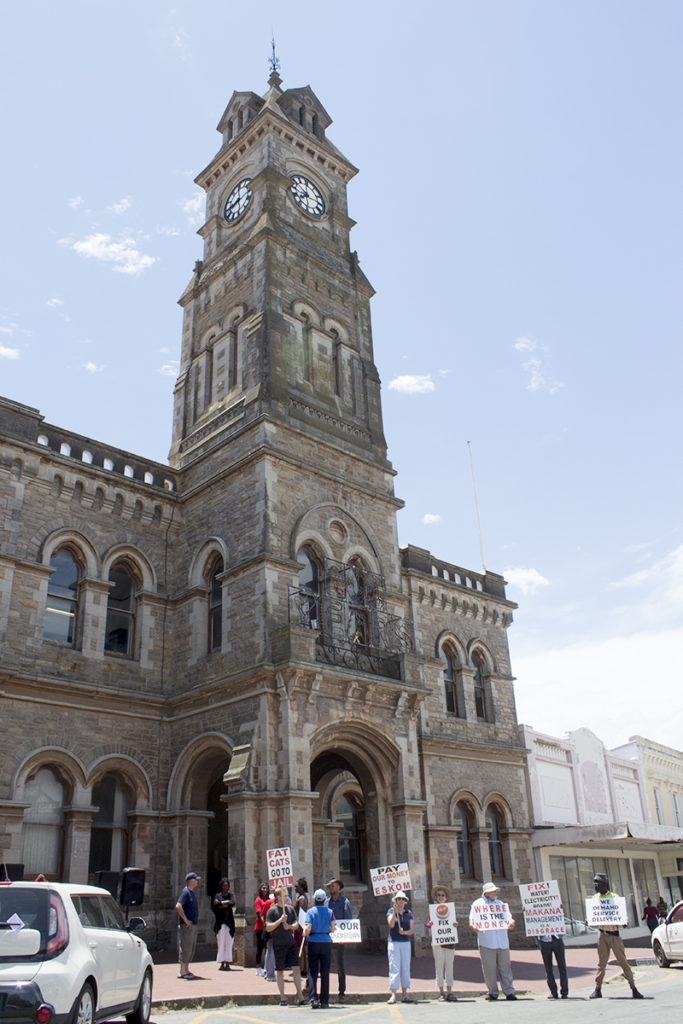 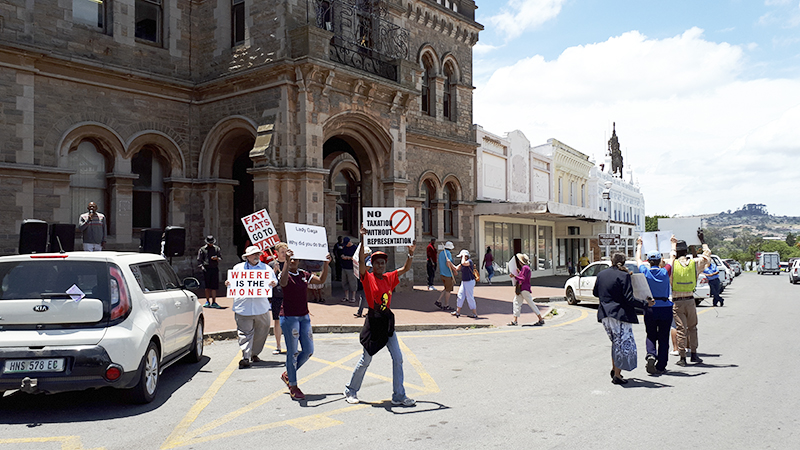