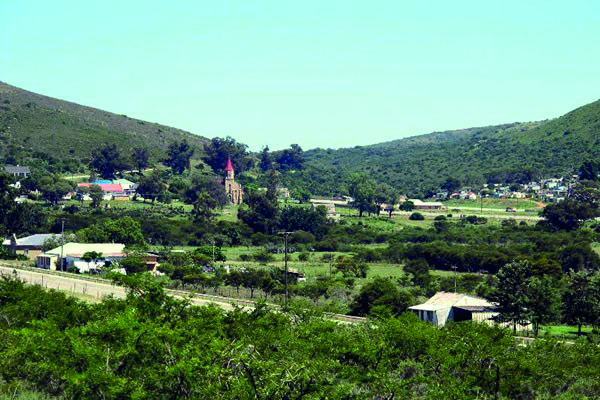 But, help is on the way.

Makana Democratic Alliance councillor Carolynn Clark, who lives in the town, said that an R810 00 drought disaster relief grant was made available to the Makana Municipality earlier this year to fix the town’s water supply, which is currently reliant on four exhausted boreholes.

A Gauteng-based contractor visited the town recently to identify where there was a better water supply and then sunk four new boreholes on the outskirts of the town, Clark said.

But, those boreholes have to be connected to the water treatment works before they can be useful to the town.

A tender for the refurbishment of Riebeek East’s bulk water supply (phase 1) was issued by the Makana Municipality on 23 November and a site briefing was scheduled at the Riebeeck East Water Treatment Works for 27 November. The deadline for tender submission was Thursday 13 December, but, in the meantime, the boreholes have finally run dry.

“It was a matter of timing. They didn’t realise that the existing boreholes would run out of water this quickly. The finance is there to connect the boreholes to the water treatment plant, but that is in the final stages of the tender process.

A number of Makana officials, including acting Director of Infrastructure Kelello Makgoka and mayor Nomhle Gaga, are aware of the situation and will visit Riebeek East today (Friday 14 December). They will investigate what temporary measures can be made in connecting the new boreholes as a temporary measure until the formal work [on the tender]connects them permanently.

This week Clark put out a call out to farmers in the area that have boreholes and some farmers came forward to assist with the filling of water tanks.

However, the Municipal water tanker in Grahamstown is currently in for repairs.

Clark said she asked the municipality to approach the army, “because they have a water truck that we could use, but it has to be requested by the Municipality”.

The last remaining water in the existing boreholes are being throttled: the valves are opened for an hour at 5am, 12 noon and 6pm.

“The water is not great quality, but it is usable,” Clark said.

Meanwhile, water was taken into the town on Wednesday.

Resident Sharon van der Merwe confirmed that farmers were assisting by making their own borehole water and containers available to the 800 residents of the town.

Another resident who wished to remain anonymous questioned the fact that an appointed contractor [from Gauteng]sunk four new boreholes on the outskirts of town” instead of “deepening or fixing any of the existing four boreholes”.

He said it would cost a local contractor around R50 000 to R60 000 to simply dig a further 10 metres in the existing four boreholes.

“The new boreholes cannot be used because no provision has been made to connect them to the waterworks. There are no pumps, water pipes, or any electrical supply at the boreholes,” he said.

“It does not make sense to drill six to ten new boreholes at great cost. It will cost millions to connect power, pumps and water lines to each of these boreholes.

“I would rather have a working Mini than half a Rolls Royce.

“Now we have eight useless dysfunctional boreholes instead of four working ones,” he added.

In response, DA councillor Carolynn Clark said, “They felt that it wouldn’t help to sink the existing boreholes any deeper, because the aquifer they are reliant on is running out.”

Earlier this year, an R810 000 water infrastructure grant was awarded to the Makana Municipality as part of a multi-million rand drought assistance package made by the Minister of Co-operative Governance and Traditional Affairs (COGTA), Dr Zweli Mkhize.

At the time, Mkhize called on grant recipients to “implement the drought relief projects swiftly in order to cushion affected citizens”.

Mkhize, whose department is responsible for disaster management in the country, emphasised the need for the government “to protect the vulnerable and the poor who are the most at risk from the social and humanitarian effects of the drought”.