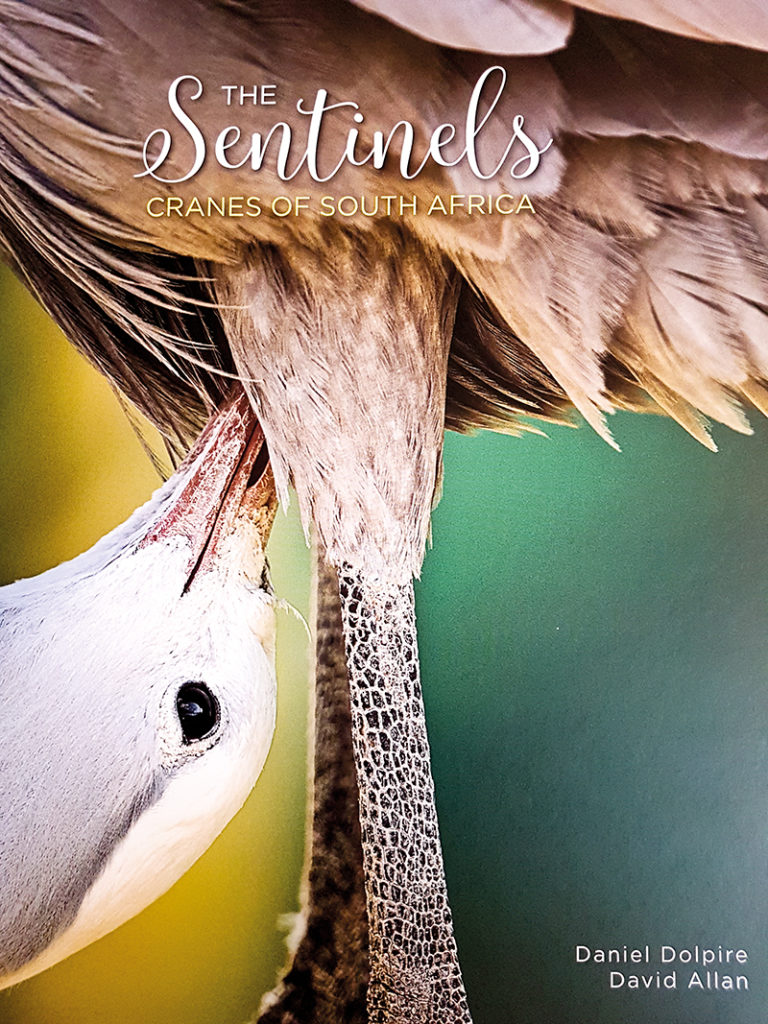 In September 2013, photographer Daniel Dolpire set off on a passion-driven odyssey that would consume the next five years of his life. The Sentinels: Cranes of South Africa is the culmination of that epic journey.

South Africa supports three crane species. The courtly Blue Crane occurs virtually nowhere else in the world and is the country’s national bird. The majestic Wattled Crane is among the most endangered birds in South Africa. The ornate Grey Crowned Crane is one of the most beautiful birds on earth but, worryingly, it seems to be decreasing across its broad African range even faster than the other two species.

Daniel’s photographic journey with cranes became an obsession as he realised the importance of these birds as sentinels indicating the fragility of wetlands and water catchments.

The Sentinels is a photographic commemoration celebrating the beauty and uniqueness of these remarkable birds. Daniel travelled through the heart of South Africa’s ‘crane country’, meticulously documenting these birds in their natural habitat. Sharing with us timeless and beautiful images of cranes at rest and in action as they go about their daily routines, he draws us deep into the private lives of these flagship species.

Daniel said that the best time to photograph wildlife is in the early morning and late afternoon. So photographing cranes at roost sites always presented a problem as the birds would typically fly off before the sun was up and come in to roost after the sun had set Patience is indubitably the photographer’s most valuable attribute, as getting the right images is frequently a waiting game that can stretch over hours.

The book also provides a map identifying the best places and times of year to see the cranes in South Africa. It describes how wetlands work and the last chapter describes the conservation project that the KwaZulu-Natal Crane Foundation is doing, namely, rearing the Wattled Cranes in captivity. The long-term goal of the project is to re-introduce the captive-reared Wattled Cranes into the wild to help bolster the numbers of the Critically Endangered species.

Towards the end of the project, Daniel brought in local ornithologist David Allan to ensure that the volume was underpinned by a scientifically rigorous text.

Daniel Dolpire is a seasoned photographer, having traveled extensively photographing the wildlife and scenery of Africa. Over the past five years his focus has changed from general wildlife photography to a challenging project of photographing the Cranes of South Africa.

David Allan has been the Curator of Birds at the Durban Natural Science Musuem for 22 years. Before this he worked for nearly a decade at the FitzPatrick Institute of African Ornithology and the Avian Demography Unit, both at the University of Cape Town.

David is the author of several birding book and is a regular contributor to the magazines Africa – Birds and Birding and African Birdlife.

Perhaps more than any other living creatures, cranes evoke the retreating wilderness, the vanishing horizons of clean water and air upon which their species – and ours, too, though we learn it very late – must ultimately depend for survival. – Peter Matthiessen

Stand a chance to win a copy of the book

To be in the running for one of two copies of The Sentinels: Cranes of South Africa , send an email with CRANES OF SOUTH AFRICA in the subject line. Address it to community@grocotts.co.za and in the body of the email put the answer to this question by midday on Monday 10 December 2018:
What are the three crane species found in natural habitats in South Africa?

Please include your full name and all contact details, as well as your address.