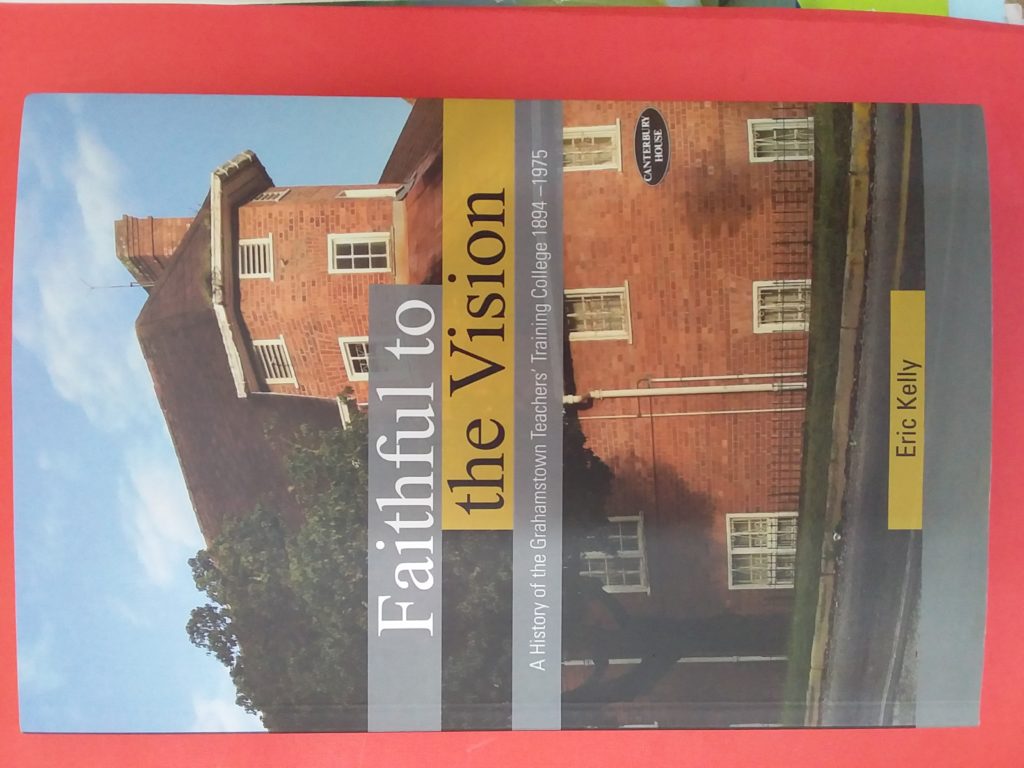 Faithful to the Vision by Eric Kelly
NISC, Grahamstown. 159 pages.
(available from the author at R180 ericjeankelly@gmail.com)

By Roy Lubke and Delysia Hoehne

This History of the Grahamstown Teachers’ Training College (locally called TC) which educated numerous teachers from 1894 to 1975 was recently launched. The Reverend Dr Eric Kelly used four years of his retirement in researching the archives of the Training College, housed in the Cory Library,
Rhodes University; in the production of a Doctor of Philosophy thesis on the history of the TC and his degree was awarded in 2016. Two years later and this thesis has been converted into a very readable history of the Training College. The book is dedicated to all those teachers who took their learning
from the College to schools throughout Southern Africa.

TC was established by Mother Cecile, who responded to an appeal by the Bishop of Grahamstown, at an address in London in 1883, for woman in Britain to come to the Cape to do church work. In Grahamstown she founded the Community of the Resurrection of our Lord and established a small
school. When, in 1894, Dr Muir, the Superintendent General of Education in the Colony, spoke in Grahamstown of the need for a teacher training school in the Eastern Cape, Mother Cecile again took up the challenge. In July 1894 TC opened with eight students. For over 75 years the college went from strength to strength establishing numerous college buildings for a library and teaching, houses or dormitories and a small chapel (the “Nuns’ Chapel”) and notably the beautiful chapel of St Mary and All the Angels that was consecrated in 1916.

Over the years this educational institution has, by preparing numerous lady teachers in a practical holistic way to teaching, played an important role in inspiring pupils throughout South Africa and neighbouring countries. Eric Kelly stresses the contribution of the teachers to the Southern African
community in Chapter 10; The Diaspora.

In the 1960s the Nationalist government started to draw in the strings of school education under its control and one of the early casualties of its failed school education system that in the 1980s led to the uprisings around the country was the closure of the Grahamstown Teachers’ Training College
in 1975. The buildings were sold to Rhodes University and now houses important faculties and a residence hall of the university. The Chapel was not sold but presented to the university as a gift by the Sisters of the Community “to be used as a place of worship by all students”.

This book is delightfully presented with a “don’t lose me charm” with its beautiful photographs of the teachers training college to attract you. It is a wonderful guide to several matters of interest to many.

Firstly, the necessity of early quality education in South Africa, secondly dedication of concern from the church towards education, thirdly the marvellous work carried out by few women for the perseverance in the face of real difficulties in the compliance with government regulations.

It expounds on the wonderful ways in which many extra and attractive subjects where introduced for example music, art and physical education. The book gives us more than just the simple fact of life at the college but often takes us into a situation where, were it not for the conviction of God’s guidance and endeavour, the work could not had gone forward.

It confirms one’s own belief in opening up the need for quality in education in South Africa and beyond. To read of the influence of good in a difficult world gives us all a wonderful sense of fulfilment, we recommend this book to all who are concerned with education to boost them to a higher dedication to their calling.