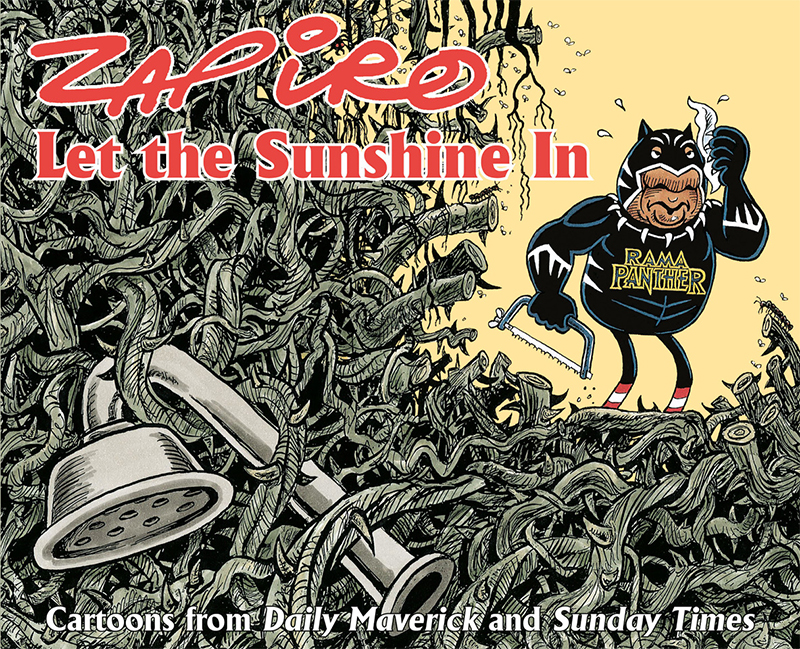 In case you didn’t get how catastrophic State Capture, Trump, US gun laws, the drought, the ANC’s internal politics, listeriosis, Life Esidimeni, sanitation at rural schools (and rural schools in general), the witch hunt against Olympic gold medallist Caster Semenya and Malusi Gigaba’s tourism-stopping visa requirements were, Zapiro is keen to remind you.

Frankly, the political analyst and cartoonist’s annual gift to the nation this year feels like a knife in the gut, as he makes sure you feel the enormity of the Guptas’ role in the collapse of our democracy, and the active complicity of the people trusted to protect it.

It takes a really angry, straight-shooting person to turn Trump’s infantile and depraved remark about shithole countries into the unforgettable image of the US president lighting his own farts. Or to depict Malusi Gigaba, claiming at the Parliamentary inquiry into State Capture that he was used by the Guptas, as a used condom. Or the EFF using burning South Africa’s Constitution as a candle on top of their five-year celebration birthday cake.

If you hadn’t lived through the past year in South Africa, you would think this furious pen (with just a few heartwarming or inspiring reprieves) was making it up. We know Zapiro isn’t, and that the knife in the gut is what our nation has been dealt – as is suggested by the image of South Africa, as a young woman, lying on a table surrounded by vampires: they are all named of course, and are those centrally implicated in State Capture.

It’s not family reading, this book, but then these days, neither is what’s going on around us. Do get it – just to remind yourself of what went wrong, and how much needs to be done to fix it.

Jonathan Shapiro works as the editorial cartoonist for Daily Maverick – previously the Sunday Times and before that the Mail & Guardian, following a career that started with the Pretoria News in 2005 (then The Mercury, The Star, Cape Times, Cape Argus, the Sowetan). He has published 22 best selling annuals. Stand a chance to win a copy of Let the sunshine in: Zapiro Annual 2018

To be in the running for one of two copies of Let the sunshine in: Zapiro Annual 2018, send an email with ZAPIRO 2018 ANNUAL in the subject line. Address it to community@grocotts.co.za and in the body of the email put the answer to this question by midday on Monday 10 December 2018:

What is the name of the head of South Africa’s National Prosecutions Authority?

Please include your full name and all contact details, as well as your address.