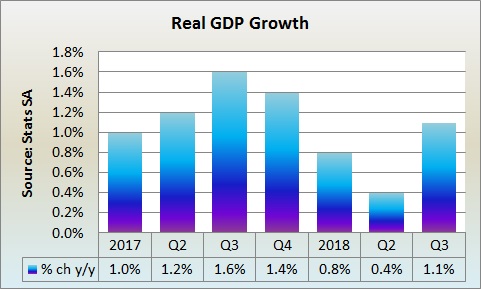 Extended disruption of electricity supply will exact its cost in terms of production losses during this quarter and even beyond.

The Gross Domestic Product (GDP) data released by Statistics South Africa (Stats SA) exceeded the Reuters consensus forecast of a 1.6% seasonally adjusted  annualised (saa) increase in the third quarter on the second quarter by almost a half, as the actual rise was 2.2%.

This brought growth in the first nine months to 0.8% year-on-year (y/y), which also exceeds the full year forecast of the South African Reserve Bank (0.6%) and Treasury (0.7%).  In the third quarter, y/y growth was 1.1%, which was more than double the consensus forecast of 0.5% y/y. A y/y increase of similar magnitude or higher to the third quarter is expected in the fourth quarter.

“With a positive growth figure of 2.2% for the third quarter of 2018, the technical recession is over. We can now switch on the lights and, hopefully keep them turned on, given the issues we’re experiencing with electricity. Importantly, if there is stronger growth, and if it can continue, it will serve to improve South Africa’s fiscal situation, which is positive for the local bond market and implies that interest rate hikes will be moderate,” he wrote in his reaction piece.

“On a more positive note, it was encouraging to see that household expenditure had risen by 1.6% quarter-on-quarter. This points to the fact that South African consumers are not yet down and out, despite the financial challenges of higher fuel costs, increased VAT and a high unemployment rate. Combined with the welcome news that consumers will see a R1.84 cut in the petrol price this month, this is likely to mean increased business and consumer confidence moving into the festive season, which in turn should further boost the final quarter’s GDP figures.  The strong growth seen in the third quarter is a step in the right direction, and with a continued focus on policy reform and implementation, we should hopefully see government’s labours slowly start to bear fruit in the near future,” he concluded.

What matters for the bond market is nominal growth and that accelerated to 7.8% y/y in the third quarter from 7.0% y/y in the second quarter and 6.2% y/y in the first quarter. As tax collections are a function of nominal GDP, the higher growth means that the bond market should take comfort that tax revenue will exceed the Treasury forecast.

The Treasury growth projection for the calendar year 2018 is only 6.4%, which is 0.5 percentage points below the 6.9% y/y growth actually achieved in the first half of the year. The economic stimulus plan announced in September and the above-inflation wage awards to civil servants should ensure that nominal GDP growth in the second half of 2018 is higher than the first half and the third quarter GDP data seems to give credence to this view.

In the first six months of the current fiscal year, revenue has increased by 10.7% y/y, while expenditure has only grown by 6.0% reducing the fiscal deficit by 11.7%. For the full fiscal year, Treasury forecast that revenue growth would only be 8.5%, while the expenditure increase would be 7.7%.

“Extended disruption of electricity supply will exact its cost in terms of production losses during this quarter and even beyond. At the very time when SA is committed to boosting investor confidence, the impact of a lack of security in power supply might also have a negative effect on the positive investor sentiment and capital formation needed to support a higher growth trajectory. The previous ‘war room’ created a few years ago between government, Eskom and business to deal with load-shedding then may need to be reactivated to deal with the present power emergency,” he said.

Sanlam Investment Management economist Arthur Kamp noted the pressure that the household sector had been under, but expected the recent drop in the oil price to boost consumption in the fourth quarter.

“Given the marked slowdown in compensation growth, the soft jobs market and an increased tax burden, it is no surprise that household spending growth is modest only. At the same time, an inadequate return on investment, in a weak productivity environment, has constrained business expenditure on fixed investment.  Looking ahead, the recent sharp fall in oil prices, which should support our terms of trade and purchasing power, amidst increased agricultural production and continued global growth (although perhaps moderating) is expected to help domestic real GDP growth register some improvement into 2019,” he concluded. How to achieve financial freedom