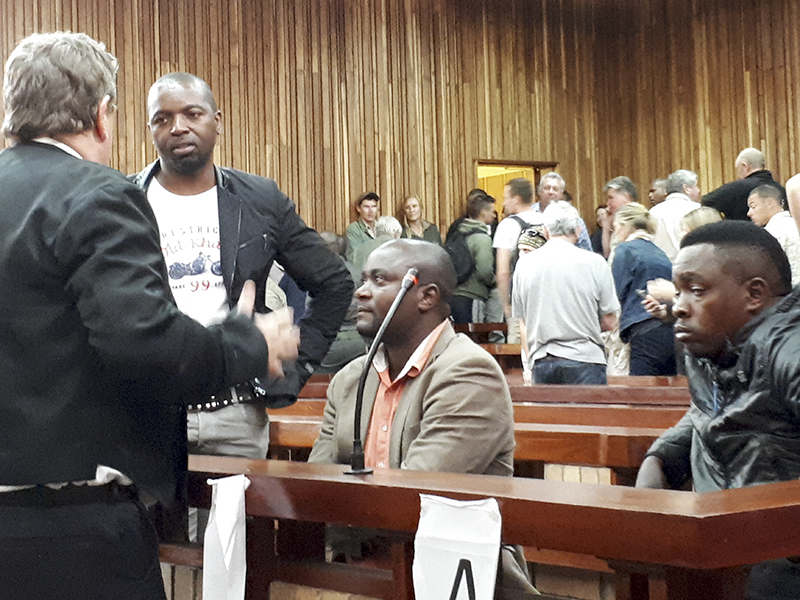 Jabulani Ndlovu‚ Forget Ndlovu and Sikhumbuzo Ndlovu consult with Senior Counsel Advocate Terry Price in the High Court in Makhanda (Grahamstown) on Monday 26 November. They are on trial following their arrest at Makana Resort on 17 June 2016 in possession of a freshly harvested rhino horn. They have pleaded not guilty. Price is briefed by attorney Alwyn Griebenow. Photo: Sue Maclennan

A chip of paint led to a further delay in the high-profile Ndlovu trial finally under way in the High Court in Makhanda (Grahamstown) last week.

In High Street on Monday 26 November, an emotional crowd of animal rights and anti-poaching activists, vets, environmentalists, private reserve owners and local councillors matched their step and song to a toyi-toyiing army of rangers. Later, inside the packed High Court in Makhanda (Grahamstown) you could have heard a leaf fall as Judge Jeremy Pickering read out his judgment in a trial within the high-profile Ndlovu trial.

Jabulani Ndlovu, Forget Ndlovu and Sikhumbuzo Ndlovu were arrested at Makana Resort outside Makhanda in June 2016. Seized from their chalet were a freshly cut rhino horn along with tranquilliser, a dart gun, a saw and a knife. They were apprehended as part of the South African Police Service’s Operation Full Moon hours after the killing and removal of the horn of a white rhino at Bucklands Reserve outside Makhanda. Police have alleged they may be linked to as many as 50 rhino poaching cases across South Africa over a number of years.

Judge Pickering was to pronounce whether the evidence gathered on that night, 17 June 2018, at Makana Resort’s Chalet Number 8 was admissible, since a search warrant had not been obtained by the investigating officer.

Nearly two hours into the morning’s proceedings, referring to numerous other judgments, Judge Pickering ruled that the unconstitutional obtaining of evidence would not prejudice a fair trial in this case. He further exonerated the officer who had entered the chalet without a search warrant, saying his conduct had been in the context of the reality of police operations.

“A blunder of a bobby on the beat is not the same as a deliberate attempt to circumvent rights,” the Judge said. “I am satisfied that the admission of [this]evidence is not contrary to the administration of justice. The exclusion of this evidence would have been.”

Viljoen, prompted by Coetzee, outlined in detail the meticulous detective work that had aligned GPS tracking on the hired cars used by the Ndlovus to cellphone signals and found correlations with the locations and timing of specific poaching incidents.

He gave detailed evidence on the manufacture and distribution of the Schedule 6 drugs found in the men’s possession: only veterinarians are allowed to buy them. This batch was legally made in Johannesburg and bought from Zambia.

He detailed that the drug comes with a recovery antidote, in case the person administering the drug accidentally wounds themself with the needle. In Incident 13 in the indictment, a black rhino had survived: black rhino were more resistant to tranquilliser, Viljoen agreed.

The last part of Monday afternoon’s evidence was centred around Bruma Lake in Johannesburg, where cellphone and GPS records located first-accused Jabulani. A lot of Eastern companies traded there, Viljoen said. National investigations were centred on this area, suspected to be a hub for trade in rhino horn, protected animals and insects and perlemoen.

Proceedings stalled on the saw that is part of the evidence, with  Advocate Terry Price SC saying on Monday of Viljoen, “This man is not certified on serrated-edged weapons.”

In question is a tiny chip of yellow paint found at the site of the June 2016 incident at Bucklands. This, the prosecution says, is a direct link between the incident and the saw found in the men’s possession at Makana Resort.

The State would bring an expert from Pretoria, Coetzee said, to present the evidence on Thursday 29 November. Following this, there is likely to be further evidence from Viljoen.

The trial finally got under way against the background of no fewer than 18 rhino shot, their horns removed, in the Eastern Cape this year.

It was this growing number that led anti-poaching activists to call for a state of emergency over the high numbers of rhino deaths, and organise Monday’s march ahead of the court session.

Led by MEC for Environmental Affairs and Tourism Oscar Mabuyane, around 200 people marched from the Drostdy Arch, toward the Cathedral, returning to the High Court.

In his address from the High Court steps, Mabuyane emphasised that it was not just the rhinos themselves that were being destroyed by poachers, but the tourism economy.

As he did earlier this year at World Field Rangers Day celebrations at Thomas Baines, Mabuyane pledged additional resources for the Eastern Cape to protect the Province’s natural heritage.

At the August event, Mabuyane cited the International Ranger Federation’s recording of 55 deaths of rangers in Africa in the past 12 months, and that since 2012, more than 269 rangers had died protecting Africa’s wildlife . “At least 176 of these brave men and women [were]gunned down by militia groups, unknown assailants or armed poachers working for multinational wildlife crime syndicates,” he said at the time.

Mabuyane said as of the end of 2017, 504 rhinos had been illegally killed inside Kruger National Park and 524 in other regions of South Africa, bringing the total to 1 028. This was a slight decline from the 1 054 animals killed in 2016.

The trial trial resumes in the high Court in Makhanda (Grahamstown) on Monday 28 January 2019.