A game of (porcelain) thrones 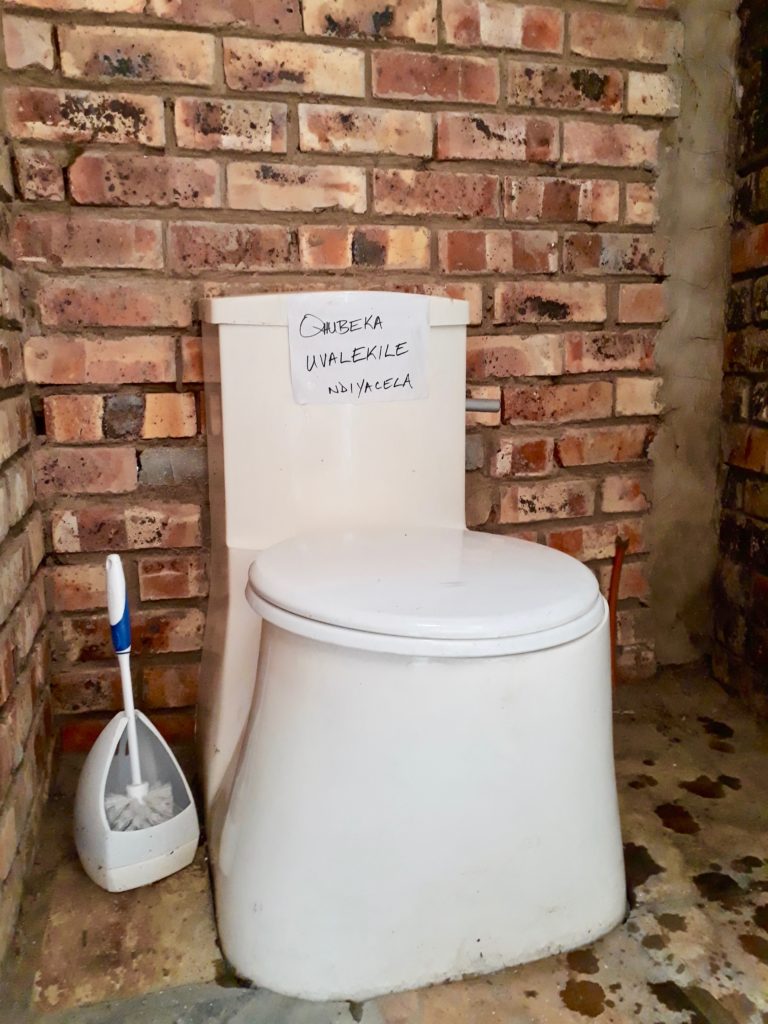 In 2010, local environmentalist Nikki Kohly made the decision to go waterless, by purchasing a SANIX E-Loo. Not only does the eco-friendly system operate without water, but separates liquids and solids into separate chambers, aiding in their natural decomposition. Kohly says that the liquid can be diluted and works as an excellent natural fertiliser.

“Lemon trees love wee!” exclaimed Kohly. “You’ll find a lot of people in [Makhanda] are secretly going out at night and peeing on their lemon trees!” she said with a smile.

The solids are dehydrated through a ventilation system until becoming a fine ash-like powder. The powder can then be bagged and disposed of in a landfill or added to a compost heap. Because of the health risks of human waste, Kohly emphasised that the solid material needs to be handled carefully, and exposed to sufficient heat or composting.

The SANIX model is not the only alternative sanitation system. In fact, in 2011 the Bill and Melinda Gates Foundation launched the Re-Invent the Toilet Challenge as a result of poor global sanitation. In November this year, the Foundation hosted the “Reinvented Toilet Expo” in Beijing, China. The first expo of its kind brought innovators, scientists and engineers from all over the world together to showcase new water-saving, eco-friendly and cost-effective sanitation technologies.

Kohly’s system was just under R6 000, a steep price for some, but packed with long-term benefits. However, Kohly argued that this kind of toilet could be disastrous in impoverished communities without the proper education and maintenance. “It’s got to be an initiative of the community saying ‘we’ve decided to do this’,” she said.

Kohly suggested a system where community members were trained and employed to maintain community public toilets. However, there’s more than porcelain to the toilet, and Kohly says it’s time to get creative about the loo.

“We are so addicted, I think, to the consumerist, industrial revolution style of doing things,” said Kohly. “It’s all to do with convenience and exploiting natural resources without really thinking if it’s a sustainable system.”

Whether people use the bucket system or the porcelain, “it’s about how you use it, so much as what it is”, said Kohly. “I would rather be using a clean bucket system than have to walk through [faeces]because there’s a blocked [sewers].

“This lack of maintenance is going to be the undoing of us.”

Kohly added that in order to combat the “politics of the loo”, there needs to be an alternative system that everybody is willing to use; whether rich or poor. “Let’s face it,” she said. “The people experiencing the problem now are not the ones who generated it in the first place.

“At the moment it’s seen like the superior experience is the flushing porcelain toilet, and this is what white privilege is all about.

“Then you have the inferior experience is the bucket system, so you can see why people aspire to never see a bucket again.”

Though Kohly does not believe the porcelain throne will ever see its downfall, she urges people to consider the importance of a waterless option, particularly in times of drought.

Kohly is also the Rhodes University Safety Health Environmental Officer but is retiring at the end of 2018.