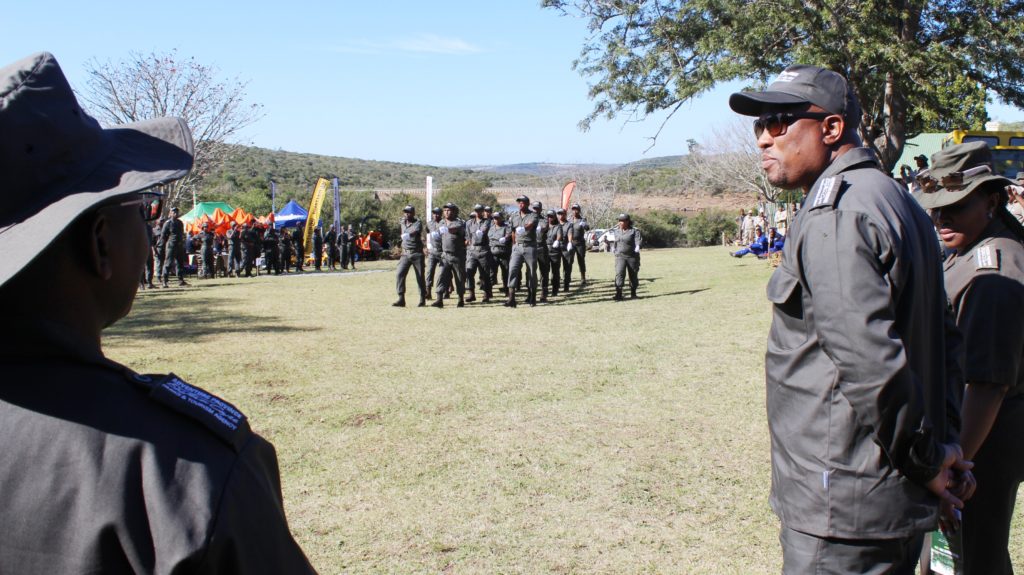 MEC for Economic Development and Tourism Oscar Mabuyane inspects the parade at a Field Rangers Day celebration at Thomas Baines Reserve in August this year. Mabuyane will keep his promise to march alongside anti-rhino-poaching activists in Makhanda (Grahamstown) Monday 26 November, ahead of the resumption of a high-profile trial. File photo (August 2018): Sue Maclennan

In a potential turning point for South Africa’s fight against rhino poaching, MEC for the Eastern Cape Department of Economic Development, Environmental Affairs and Tourism (DEDEAT), Oscar Mabuyane will on Monday 26 November 2018 lead a multi-stakeholder march in Makhanda (Grahamstown). The march will coincide with the resumption of the Ndlovu trial in the High Court. Jabulani Ndlovu, Forget Ndlovu and Sikhumbuzo Ndlovu are facing 50 rhino poaching charges in connection with incidents across the province over the past five years.

Grocott’s Mail reported that at Field Rangers Day celebrations at Thomas Baines Reserve outside Makhanda in August, Mabuyane announced he would march alongside activists who chose to demonstrate ahead of the next appearance of rhino poaching accused. In his address to Eastern Cape parks amd Tourism rangers andofficials, Mabuyane also promised more resources for the protection of the Eastern Cape’s natural heritage assets.

Staff from the Eastern Cape Parks and Tourism Agency, SANParks and private reserves are expected to march alongside Mabuyane and local and provincial political leaders, private reserves, NGOs, senior officials from government entities including DEDEAT and ECPTA.

“We are saying this cannot happen in our province and surely not under our watch but also to pay a fitting tribute to the late former Minister of the Department of Environmental Affairs (DEA), Dr Edna Molewa who has over the years been in the forefront in the fight against wildlife crimes,” said Mabuyane.

The Agency said the march also signified a turning point.

“It will be for the first time in South Africa that political leaders, government officials and private reserves stand together to make a united statement against rhino poaching,” the ECPTA said in a statement. “The message is clear – in this province the state and private sector will present a united front to combat this problem.”

Stakeholders would be making a united call under the tagline #NotInOurProvince .

Marchers are set to assemble at 7.30am at the Drostdy Arch and proceed down High Street around the Cathedral and to the High Court steps.

“The objective is to march to the high court before the day’s proceedings begin.”

Mabuyane’s presence in town is also expected to herald a reshuffle of the Makana Council, following recent interventions by the Regional Executive Council of the ANC. Mabuyane is the party’s Provincial Chair.