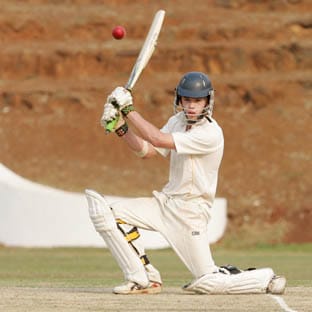 Grant Stone put up a superb performance with both bat and ball to lead his EP Rural side to victory over he weekend. Photo: Supplied
Captain and all rounder of Eastern Province Rural Cricket Team, Grant Stone led from the front in his side’s 67-run win over Border Aloes at Manleys Flats on Saturday 18 November. This was the second win for EP in their Cricket South Africa Rural Competition, South Section.

Stone produced a Man of the Match all round performance to steer his side to a much needed win. The left hand opening batsman scored his first century (119 runs) for EP and later took two crucial wickets in the Border innings.

Border won the toss and sent EP in to bat. It was indeed a batsman’s paradise throughout the day, which saw EP posted a massive 330/8 (50) and later bowled Border out for 216 (48.3). Openers Stone (119, off 125 balls) and Aviwe Sentwa (15) gave their side a reasonable start. Then it was Stone and Greg Evans (53, off 68 balls) who put up a magnificent 150-run second wicket partnership to put the EP side on the front foot. There were also some entertaining cameos towards the end of the innings by veteran Mtunzi Antoni (60*) and Warren Bowdler (51*), who batted incredibly well in ensuring a defendable target. Anele Elembi (4/92 (10)), Mandla Dutjwa (2/54 (8)) and Luvuyo Hanabe (2/34 (80)) were amongst the wicket takers for Border.

Border started their run chase off very well and placed enormous pressure on the EP bowlers. EP’s fielders were very static in the field, dropping seven catches, and were far from their best. Openers Duntjwa (74) and Hanabe (45), batted with aggression and were full of confidence. The home side’s slow bowlers came to the party and fought back nicely to swing the game back in to their favour. Stone (2/47 (10)), Bowdler (2/53 (10)), Marquin Loutz (2/42 (7)), Antoni (2/29 (6)) and Evans (2/10 (3)), were all outstanding with the ball.

Melville Daniels, the EP Rural Team manager, did not get carried away with the victory. “I am very pleased with our victory today, just what we need. Our batsmen showed a lot of character but we could have done far better,” said Daniels. “I am totally not pleased with our fielding and there were too many drop catches. Our bowlers came to the party, bowled well and have tried very hard.”

EP’s next CSA fixture will be against Boland in the Western Cape on 1 December.