Statue the starting point for conversations about heritage 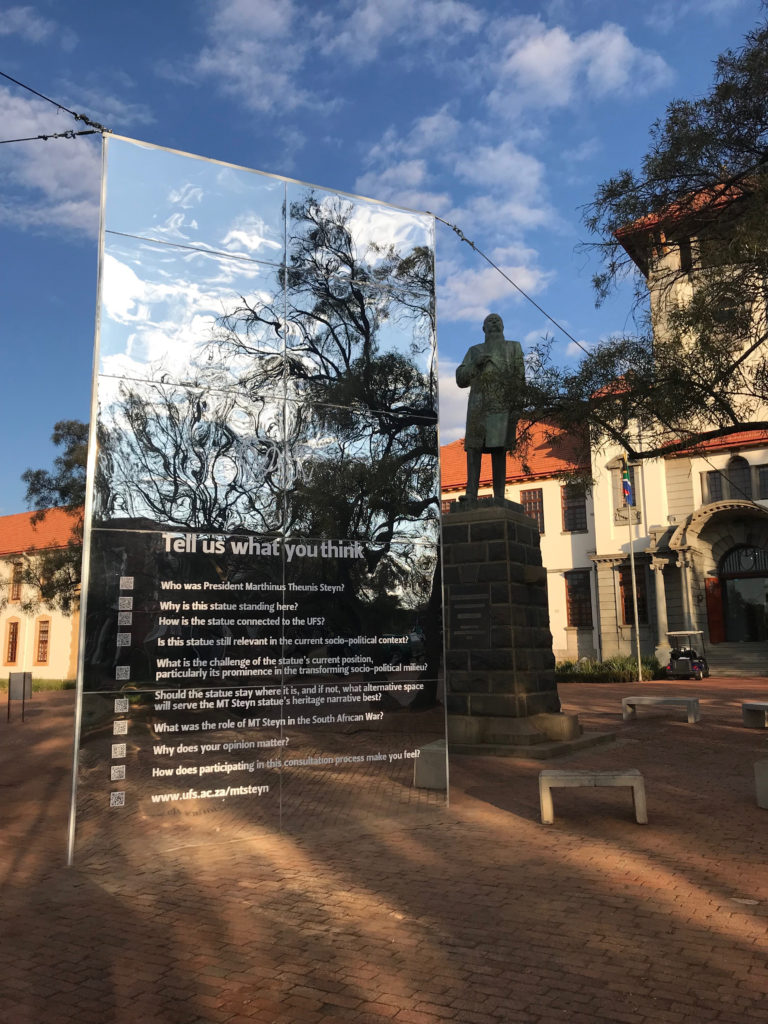 Statue of President Marthinus Theunis Steyn at the University of the Free State. Photo: UFS

Every morning on my way to the office, I pass this imposing figure. Elevated on a granite plinth in front of the Main Building of the University of the Free State’s Bloemfontein Campus, cast in bronze, more than twice the size of a normal person, the statue of President Marthinus Theunis Steyn is by all accounts an impressive work of art.

Why such a contentious figure?

Unlike Cecil John Rhodes, who has become the embodiment of colonialism in South Africa, history paints the last president of the independent Orange Free State a little more amicably: MT Steyn was an outspoken anti-imperialist, a pacifist who tried until the very end to avoid war with Britain, a humanitarian who did a lot for Boer women and children after the war.

However, he was also the leader of a republic that didn’t acknowledge the rights of all its ethnic groups. From a modern-day human rights perspective, his Free State was decidedly unequal and unjust.

In its recent report, the ministerial task team on the transformation of the heritage landscape points out that statues are never just “innocent pieces of architecture.”

They embody a strong “symbolic power” and project “the foundational values of the state and those in power.” It’s never about the persona alone, but about the totality of values he/she represents.

Situated where it is – in front of the building housing the university’s executive – the question is whether we, as the leadership of this institution, align ourselves with these values.

And if there’s any doubt, how should we go about to consider changing the status quo?

Removal of statues in the past

As South Africans, we are acutely aware of how unhappiness about statues and what they represent have been dealt with on our university campuses in the past.

There is of course a legitimate driving force behind students’ conduct: frustration about the perceived slow pace of transformation.

However, what should also be considered, is the heritage legislation that is in place to protect symbols that hold historical value and significance – specifically aimed at preserving our country’s cultural heritage for all its citizens.

At the UFS, discussions regarding the possible repositioning of the MT Steyn statue date as far back as 2003. In January this year, our Integrated Transformation Plan (ITP) was launched, and the statue was identified as a priority within the work stream dealing with ‘Names, Symbols and Spaces.’

At a student engagement earlier this year, the student community, through the Student Representative Council (SRC), once again asked for the statue to be removed. It was clear that it made certain students feel unwelcome because it represented a period in history that they did not feel part of.

I realised the urgency of the matter and appointed a Special Task Team to fast-track the review of the statue’s position. Four options had to be considered during the review process: (i) retention of the statue in its current position; (ii) reinterpretation; (iii) relocation on campus; (iv) relocation to a site off campus.

The task team, made up of representatives of various campus communities, appointed an independent heritage consultant to conduct a Heritage Impact Assessment (HIA) as prescribed by the heritage legislation, consulted widely, and gathered qualitative data. This encompassed a two-month-long public participation process.

Great effort went into inviting people to comment on the position of the statue, like erecting a giant reflective column in front of the statue, effectively erasing it out from a frontal view of the Main Building. Seven questions in English, Afrikaans, and Sesotho about the statue and the person it represents, cement benches to invite
reflection, and a suggestion box for comments completed the picture. In addition, I also had various individual meetings with relevant role players, including members of the Afrikaans community on campus, the SRC, and alumni.

Robust discussion sessions were facilitated on campus, and various opinion articles were carried widely in the media.

As there is no precedent for such a process under current South African legislation, the task team was guided at all times by principles of fairness, inclusivity, and objectivity.

The Special Task Team has now presented the university’s executive with a report, and a final decision on the position of the statue will be made during a meeting of the University Council on 23 November 2018.

I have repeatedly been asked whether the time, effort, and resources we’ve poured into the process around deciding the statue’s future have been worth it. My answer is consistently a resounding “yes”.

Through this process, everyone involved with our university were given the opportunity to express their opinions on this aspect of its future. It was a chance to really listen to one another.

Where discussions sometimes became one-sided and overbearing, we could use it as an opportunity to lay down the rules for respectful debating as a quid pro quo for future discussions on any matter.

In short: The two-month public participation period was a fruitful time of discussion, reflection, and communication. A time of deliberate stocktaking on the values which are important for all our
communities.

Whatever the final decision on the Steyn statue, it is bound to dissatisfy some. That much is unavoidable.

However, I believe that this should not inevitably lead to division on our campuses. I see the wake of the statue journey as an opportunity to foster a new university citizenship based on the value of caring – a value that we all treasure.

The past few months have given us a chance to think deeply about what it truly means to care; also, to reflect on how we should apply this value in order to be a university where equality, social justice, tolerance, and forward-looking is actively lived out every day.

A place where everyone truly feels welcome – and involved.