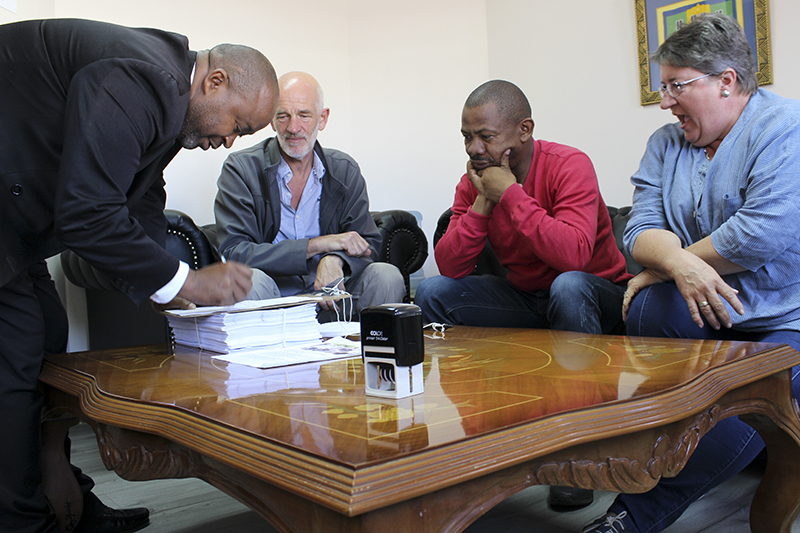 Cogta Minister Zweli Mkhize will send a senior delegation to Makhanda (Grahamstown) next week to look into the urgent concerns raised by Makana residents, according to the Department’s Head of Communications Legadima Leso. This follows the handing over of a petition to Cogta’s Provincial Office in Bhisho earlier today, Friday 9 November.

The three-person delegation of Ayanda Kota (Unemployed People’s Movement), Daphne Timm (petition campaign leader) and Tim Bull (Grahamstown Residents Association secretary) this morning delivered the petition calling for Makana Local Municipality to be put under administration. MEC Fikile Xasa was attending a meeting in Pretoria and the petition was received by Mfundo Nzukuma.

Timm led the petition campaign with a social media campaign launched on 29 September. A video shared on social media showed potholed roads, illegal dumping and stray animals and ended with the call to action to sign the petition calling for Section 139(1)(c) administration.

Speakers on the video highlighted administrative, environmental and infrastructural failures in the municipality. “There have been endless talkshops over the past five years: we now need action – we are no longer standing for this,” Timm said on the video.

Residents and local businesses volunteered for the 10-day protest and petition-signing campaign that followed.

On Tuesday 6 November hundreds of residents from across Makhanda (Grahamstown) marched through the streets and formally handed over a copy of the petition to Council Speaker Yandiswa Vara outside the City Hall.

A move by local ANC leadership, including councillors, to stage a counter-march with overlapping routes and times was averted after intervention by the Party’s Regional Executive Committee. A poster advertising the aborted march stated ‘Hands off our municipality: ANC march to defend ANC led municipality against the dissolution of Makana Municipality”.

In Bhisho this morning, Cogta’s parliamentary liaison officer Mfundo Nzukuma formally received the petition. Nzukuma was spokesperson for Xasa when he was Speaker in the Legislature and moved across to Cogta with him. The confirmed final tally of signatures on Thursday was 20 758 according to Bull.

Spokesperson for Cogta in the Province Mamkeli Ngam couldn’t confirm Xasa’s response to the petition; however, he said, “When the MEC gets a petition he applies his mind and gets the necessary guidance and will respond within the stipulated timeframe.”

He referred further questions to Cogta’s national office, where Head of Communications Legadima Leso, said Xasa had attended the Ministers and Members of Executive Councils (MINMEC) meeting in Pretoria today. He said Cogta MECs from all provinces attend this regular forum.

“The minister is aware of the concerns raised and will send a senior delegation to Makana to look into those issues,” Leso told Grocott’s Mail this afternoon. “The Minister has highlighted it as urgent, so we anticipate this will be next week.”

Timm was positive about the meeting and the handover.

“They are very aware of the failings. For example, we’ve told them about the raw sewage running into people’s houses in Extension 6 and they are alarmed at that.

“Something’s got to come of this.”

Previous ArticleCall for Speaker to explain armed cops in Council
Next Article The end of the war – heroes, hate, health and memorials