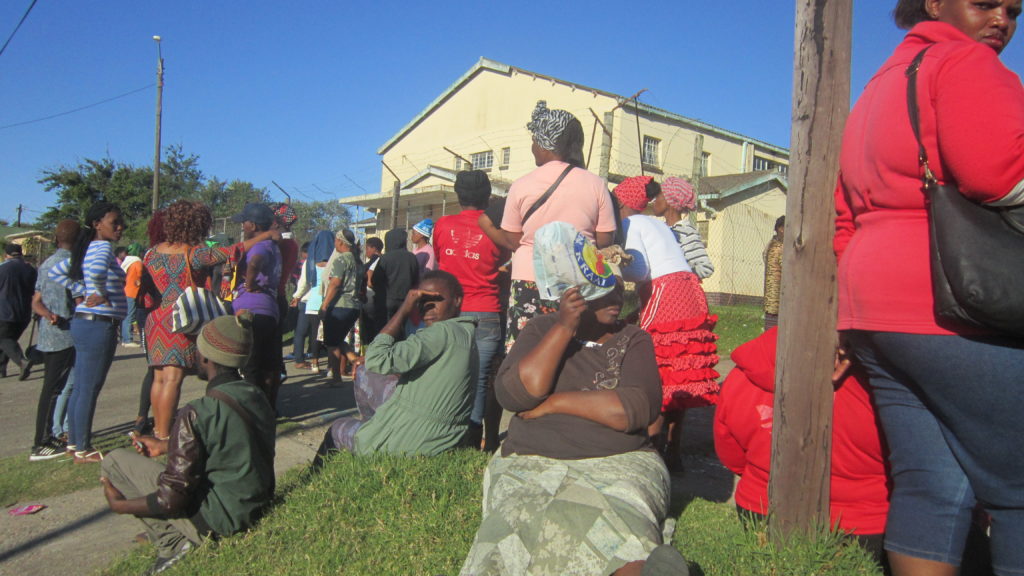 All ages were present from the youth to the Ederly,crying for one thing, high unemployment rate in Grahanstowm

More than 300 people from all corners of Makhanda queued outside the Recreation Hall in Albany Road from as early as 3am last Tuesday morning, hoping for one of the 1 600 seasonal jobs on offer at Carara Agri Processing. The Currie Street factory processes and packs for export peppers grown on farms in the district.

Grocott’s was there at 6.30am and spoke the women, desperate for work, some of whom had been there since 3am.

Zukiswa Hani, from Hlalani, has two children to care for and says there is no work in Makhanda (Grahamstown). She admitted she’d taken a risk walking in the dark, in order to be the first in the queue at 3am.

“I passed hooligans along the way in order to put bread on the table for my kids,” she said.

“After April the hunger comes back again.”

She wishes there could be more businesses like Carara that employ local people.

Mariana van der Schyf, HR Manager at Carara, said the company has been operating for 13 years, employing seasonal workers from October until the end of May.

Their products do well in the overseas market, said Van der Schyf.

Last Tuesday they’d signed up around 200 people. Two days later, they signed up another 130. They would keep hiring until their peak period in mid-March, when they reach their 1 600 maximum.

A lot of people know about the working season through word of mouth, said Van der Schyf. They also advertise on Radio Grahamstown and put up posters.

Van der Schyf said they employ relatively few men (around 200) during the season. Men are employed as forklift drivers, washers and transporters.

Duties along the production line include deseeding, washing and grading of the fruit.

The cost of transport provided by Yabo’s is shared between the workers and the company.

Van der Schyf says they employ people who are willing to work. Their biggest problem, she said, was absenteeism after payday or on the grant payment days.

“Sometimes not even a third of the staff are in the factory,” she said. “Last year we had to throw away produce because there were no people to process it.”

“We welcome everyone from 18 to 60,” Van der Schyf said. “Whether you are coloured, Indian, white or black.”