Call for Speaker to explain armed cops in Council 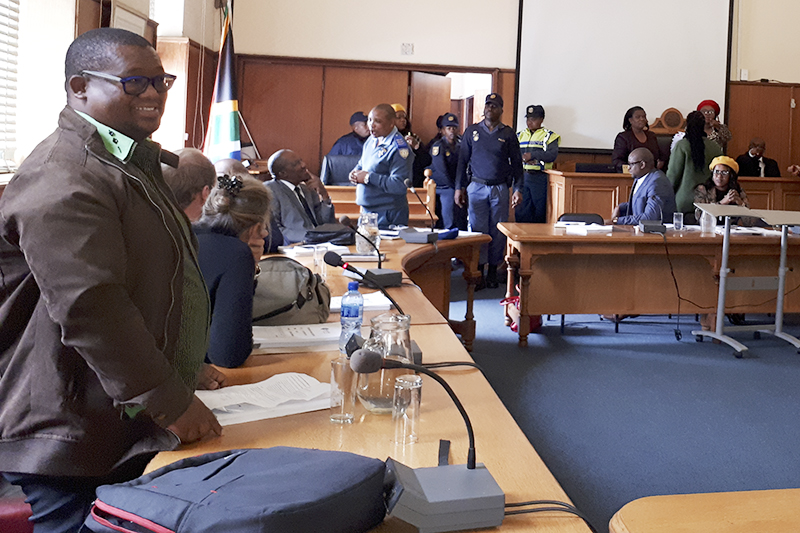 Public service watchdog PSAM has called on the Speaker to explain to the public her decision to call in law-enforcement officers to remove two councillors from Wednesday’s disrupted Council meeting.

Eight armed police officers and two traffic officials removed two councillors from the Makana Council Chamber on Wednesday, following a heated exchange between members of the DA caucus and the Speaker Yandiswa Vara. Other councillors threw themselves into the fray in an hour of chaos that left Makana’s sole EFF councillor shaken after an ANC councillor confronted her at close quarters and saw the DA caucus stage a walk-out for the second time in eight days.

The special council meeting on Wednesday 7 November continued where the adjourned Monday 29 October one left off. This was at the point when the DA caucus of eight councillors walked out, forcing the adjournment since only 13 of the 27 councillors (less than 50% plus one) remained in the Council Chamber.

That dispute had begun when the DA’s motion of question regarding Sun City – an informal settlement built on a disused dumpsite – was excluded from the agenda. Councillor Mlindi Nhanha said he’d submitted the motion to the municipal manager on 20 September 2018. The Speaker’s failure to entertain discussion on the issue infuriated the caucus and they walked out.

This time, Vara insisted that Wednesday’s meeting was a continuation of the adjourned meeting and that as such,  by law, no new items may be added to the agenda.

Councillors Nhanha and Brian Fargher objected strongly on points of order. Nhanha cited a letter from municipal manager Moppo Mene apologising for the omission and assuring him it would be included in today’s agenda. Grocott’s Mail has a copy of this letter (see below). Tempers flared, primarily between Vara, Nhanha and Fargher, but other councillors joined the fray. At one point, fellow ANC councillors restrained Ward 11 councillor Mncedisi Gojela who confronted new EFF councillor Siyamthanda Dyantyi when she stood up to speak. She was left shaken by the near-physical confrontation. Gojela was later told by the Speaker to apologise, which he did.

WHAT’S GOING ON IN THE VIDEO
ANC councillor Mncedisi Gojela confronts EFF councillor Siyamthanda Dyantyi during a tense and conflict-riddled Makana Local Municipality Council meeting in the Council Chamber on Wednesday 7 November. Fellow ANC councillor Luyanda Nase tries to restrain him. DA councillor Mlindi Nhanha can be heard objecting to the conduct and Speaker Yandiswa Vara can be heard interjecting. 2018 11 07 at 09 57 49. Nhanha was one of two councillors subsequently removed from the Council Chamber by eight armed SAPS members and two traffic officers.

In chaos reminiscent of some of the more notorious incidents in Parliament, the Speaker instructed the municipal manager to bring in law enforcement to remove councillors Nhanha and Fargher.

Councillor Mabhuti Matyumza requested that law enforcement deal also with “the media” for alleged unauthorised documentation of the meeting. Grocott’s Mail was the only media representative present and was not removed.

According to a subsequent statement by the DA, there were more officers outside the chambers and another contingent arrived as the councillors were leaving, totalling around 20. Grocott’s Mail remained inside the Council Chamber and so did not witness that first-hand.

The Public Service Accountability Monitor (PSAM) called on the Speaker to explain to the public the reasons for the heavy handed action.

Asked to comment on the incident, Director Jay Kruuse said, “The PSAM calls upon the Speaker to explain to the public (a) what reasons informed the decision to call upon law enforcement authorities to remove certain Councillors; and (b) what Rules/Regulations/Acts provide the Speaker with such powers to involve law enforcement, and under what specific circumstances may such authorities become involved in the manner reported?”

PSAM also called on the Municipal Council to investigate alleged breaches of the Code of Conduct by Councillors that allegedly occurred on Wednesday, as provided for in the Municipal Systems Act.

Failing this, PSAM would approach the MEC to investigate the allegations as provided for in clause 14(4) of Schedule 1 of the Municipal Systems Act.

In a statement released after the incident, the DA said, “The failing ANC government in the Makana Local Municipality has stooped to the level of using the South African Police Service (SAPS) to try and hide its absolute failure. Today, while DA Councillors were attempting to fight for the rights of people oppressed by poverty, the failing ANC called in the SAPS to intimidate the DA caucus.

“Eight armed police officers entered the council chamber to intimidate the DA. Eventually, 20 armed officers forcibly removed Cllr Brian Fargher and I. In accordance with the rules of council, weapons are not allowed in the chamber.”

The meeting continued without the DA, 16 councillors being present.

The DA last week declared their support for citizens calling for the dissolution of the Makana Council   and according to Nhanha, 50 DA members were among the hundreds who marched on the City Hall.

The local ANC leadership, including councillors in the caucus, was clearly in a mood for confrontation this week. Only last-minute intervention from the Regional Executive Committee prevented the local leadership from staging a counter-march, announced on the eve of the petition march, and in opposition to it.

‘Hands off our municipality: ANC march to defend ANC led municipality against the dissolution of Makana Municipality”. With overlapping times and routes, the scene seemed set for a conflict.

Questioned about this on the morning of the petition march, Subregion Chair Mabhuti Matyumza confirmed the counter-action. Ward 7 councillor Malibongwe Kubalo later said he and others from the caucus would join it, in their capacity as ANC members.

However, the party’s REC expressed strong concern about the move. In a letter to local organisers and seen by Grocott’s Mail, REC chair Scara Njadayi said, “I think the content carried in the Makana ANC Poster of Defending the Municipality is in contrast with the founding principles, tradition and values of the congress movement … The ANC promotes democratic principles and the right of individuals to protest.”

Local and regional leadership instead gathered at a meeting at BB Zondani Hall on Tuesday morning. Outside the venue, Matyumza told Grocott’s Mail: “We decided to arrange our march for another time that we will announce.”

Commenting on the petition and the call to dissolve the Council, he said, “You cannot deny that this is a democratically elected Council. What they are trying to do is take a shortcut by dissolving it. There is no shortcut to democracy.”

Commenting at the close of the open segment of today’s meeting, Vara said of yesterday’s march, “These mass actions are not surprising. They are driven by one and only thing – the elections next year. We must always be ready and we must warn residents not to be misled by any Tom Dick or Harry telling them not to pay their rates. They have only one thing in mind – to destroy this municipality.”

The organisers of the petition and the march have repeatedly stated that the campaign is non-party political.

COUNCILLORS AND QUORUMS IN THE MAKANA COUNCIL

EFF 1 (one resigned on Wednesday morning)